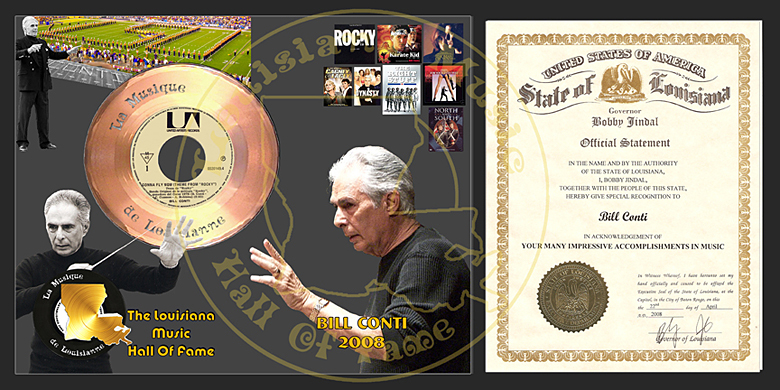 One of Hollywood’s most sought-after composers, Bill Conti has won one Oscar and three Emmy awards, but the work in the LSU graduate’s television and movies goes far beyond those accomplishments.

Born in Providence, Rhode Island, Conti is probably best known for his composition of Gonna Fly Now, the unmistakable theme from the 1975 Academy Award-winning Best Picture Rocky, both of which earned him Oscar nominations.  He also wrote the Sheena Easton number-1 hit For Your Eyes Only from the James Bond movie of the same name.  The Rocky theme also earned him a Golden Globe nomination, a Billboard Award nomination, an RIAA Certified Platinum Album, a Rock Award nomination, and a Grammy nomination for Best Original Score.  For Your Eyes Only also received an RIAA Certified Gold Record and two Grammy nominations for Best Instrumental Composition and Performance.

At age fifteen, Conti organized his first band and began performing for high school dances in Miami, Florida.  He received a bassoon scholarship to LSU where he majored in composition.  He also played jazz piano at many local nightclubs in the Baton Rouge area to help offset the cost of a college education.  He held several musical positions at LSU, including first chair bassoon in the school symphony orchestra, staff arranger for the school’s marching band, and accompanist for the LSU Ballet Corps.  It was in the latter capacity that he met his future wife, Shelby Cox, a member of the Ballet Corps and a soloist with the Modern Dance Group.  She co-wrote the vocal ballad All of My Life for the Rocky soundtrack album.  The song, which depicted the deep love Rocky Balboa and Adrian had for each other, was not included in the movie.

After receiving his Bachelor of Music degree from LSU, he was accepted at the Julliard School of Music in New York where he won the 1965 Marion Feschi Prize for composing the best song of the year.

Besides Rocky and For Your Eyes Only, Conti has also composed musical scores for many box office hits including Private Benjamin, Broadcast News, Spy Hard, Baby Boom, fiX, and The Karate Kid.

He won an Oscar for Best Original Score for The Right Stuff.

He won two Emmy Awards in 1990 for developing the creative concept and for composing the score for the running of the New York City Marathon, which was telecast by the ABC-TV network.  Conti conducted the Julliard Symphony Orchestra live from the Lincoln Center during the course of the marathon, a first in television sports coverage.

Conti composed some of the most recognizable themes for television programs, including those for Good Morning America (1984), Turning Point, World News Tonight, Prime Time Live, Nightline, ABC Sports, Inside Edition, and American Gladiators.  He also composed music for TV commercials for Honda, Pizza Hut, Sprite, and Coca-Cola, and For Your Eyes Only was used in a Merrill Lynch commercial.

During the 1983-84 television season, Conti set an all-time, but short-lived industry record for having composed the themes for five concurrent prime time television series.  He broke his own record in 1986-87 when the number nearly doubled to nine – Dynasty, Falcon Crest, Cagney & Lacey, Lifestyles of the Rich and Famous, OHara, The Colbys, Our World, Business Week, and Mariah.

On April 22, 2008 before a packed house at the LSU Union Theatre, Bill Conti was Inducted into The Louisiana Music Hall Of Fame. 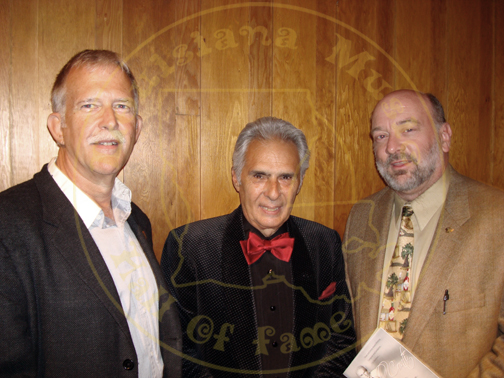