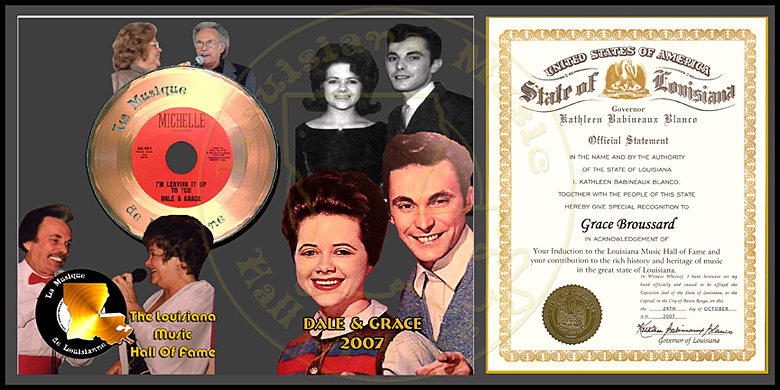 Dale Houston and Grace Broussard had known each other barely twenty-four hours when they teamed up as the duo Dale & Grace to record a song neither of them knew would skyrocket to the number one song in America in late 1963.

Dale, born on April 23, 1940, in Seminary, Mississippi, moved with his family to Baton Rouge when he was seven. He recorded a song entitled Lonely Man that cracked the Top 100 list briefly and that was enough to convince him he wanted to make music his life’s calling.  S.J. (Sam) Montalbano, owner of Montel Records in Baton Rouge, was impressed enough with Houston to sign the eighteen-year-old as a songwriter.

Grace, born a year before Dale in Prairieville, just south of Baton Rouge, was nineteen at the time and had been singing in her brother Van Broussard’s band since she was sixteen.  Montalbano also had Grace under contract.  Versions of how the two came to record together vary significantly.  Montalbano, who operated a demo studio for local musicians inside his father’s produce company, said Dale was working a gig in a bar in Ferriday.  He said he and a friend drove from Baton Rouge to get Dale because Montel wanted to have Dale do harmony with a promising female singer.  “We picked up Dale that night and drove back to Baton Rouge, then went to Prairieville (about fifteen miles south of Baton Rouge) and picked up Grace Broussard and introduced them to each other.

Montalbano had a piano at his home and the two singers started rehearsing in preparation of a recording session the next day. It was after midnight and the duo had been at it for about four hours, doing old songs and some that Montalbano had given them to learn.  Dale started playing the old Don and Dewey (Squires) song from the mid-’50s called I’m Leaving It All Up to ou.  Montalbano came out of a dead sleep when he heard it from his bedroom, ran into the living room still in his underwear, and screamed, “Play it again….that’s a hit!”  The next day he took Dale & Grace to the recording studio where they cut four songs.  Montel Records then released I’m Leaving It All up to You as a single and by October 1963, it was the number one record in the nation.

Not so, say both singers.  Dale had been touring in Colorado, Nevada, and California with swamp pop singer Jay Chevalier. They had a break in their tour schedule about the same time as the Cuban Missile Crisis and Dale returned to Baton Rouge in order to record some new songs.  “I was contracted with Sam and Montel records and had three or four tracks I needed to get laid down while we were on the break,” Houston said in an interview for this book.  “I met Grace at a cookout at Sam’s home the night before I was to go to Lafayette for the session.  She decided to ride to Lafayette with us.”

Grace, in a separate interview conducted during a break while performing with her brother Van Broussard at a Baton Rouge casino, agreed with Dale’s version.  “We had the same manager and we went to La Louisianne Studio in Lafayette the day after the cookout.  Dale was supposed to record some songs and I was supposed to record a single for Sam.

During a break in the recording session, Dale wrote the first verse to the lyrics of I’m Leaving It All Up to You, a song by a California R&B duo, Don and Dewey (Squires).”  He’d first sung the song for Grace only the night before at the cookout and when he scribbled the lyrics at the La Louisianne Studio, Grace said, he omitted the second verse.  “We recorded it anyway,” she said.

“I finished my songs and I asked her to sing a few with me,” Houston said.  “We did a couple of numbers, including the Buck Owens song Foolin’ Around.  Then I asked her to sing I’m Leaving It All Up to You with me and she said she didn’t know the words.  I told her I’d write them down for her and I completely forgot to include the second verse. “I called Jay Chevalier and told him I was bringing Grace with me to our next show in Wichita Falls, Texas.  He said, ‘Dale, I don’t know about this.’  I told him I’d pay her expenses out of my pocket because I thought she was that good.  I said I was sure he’d like her.  When I got to Wichita Falls, I went to his hotel room and played him a tape of her singing and he sat straight up when he heard her voice.  He absolutely loved her.  We started making plans to return to La Louisianne to lay down the second verse.

“By the time we got to the Golden Nugget in Las Vegas, Sam was calling us to say we had to get back to Baton Rouge right away,” Houston said.  I asked him why and he said he had released one of our songs and it was a big hit.  I asked what song and he said, ‘I’m Leaving It All Up to You.’  I was shocked because we never even got the chance to do the second verse.  Sam took the tapes to Houston and added backup vocals and violins.  The violins played in the wrong key but that was the way they released the song and it went to number one.”

The song was initially released on Michelle, a regional label named for one of his daughters, and later re-released on his national label, Montel.  “It wasn’t S.J. Montalbano’s idea to team us together,” Grace said.  “It was just a situation of the right place and right time.  After we recorded it, I went on the road with Dale and Jay Chevalier and we were in Vegas when S.J. called and said we had to get back to Baton Rouge because the song was a hit.  We didn’t know what he was talking about because the song wasn’t even finished,” she said.

The song debuted on the national charts in October of 1963 and the pair joined the Dick Clark Caravan of Stars. On November 17, 1963, Clark joined them onstage in Cincinnati and said, “I have an announcement for Dale & Grace.” Grace said they had no idea what was occurring.  “He went on to read the telegram that informed us that I’m Leaving It All Up to You had reached number one in the country.”  Both Dale and Grace still have copies of that telegram and Houston still has a copy of the Billboard Hot 100 chart for the week of November 17, 1963.

The tour took the performers to Dallas the next week.  It was in Dallas on November 22 that Dale & Grace, Brian Hyland, Bobby Vee, and fellow Baton Rouge native Jimmy Clanton, all part of the Caravan of Stars, smiled, waved and shouted to President John F. Kennedy and he waved back at them as his motorcade passed.  When the presidential motorcade had traveled another three blocks, shots rang out.  It wasn’t until later that they learned those shots had cut short the life of President Kennedy.

“We followed I’m Leaving It All up to You with We’ve Got to Stop and Think It Over and it went to number eight,” Dale said.  He acknowledged that We’ve Got to Stop and Think It Over sounded much like their first hit.  “Yeah, it had the same beat and all; they were similar,” he said.  “It would have gone to number one, too, but the Beatles hit right at that time (early 1964) and they bumped us (with She Loves You).”  Dale & Grace, however, did receive gold records for each of the songs and they appeared on the Louisiana Hayride in Shreveport where Dale’s cousin, David Houston, got his professional start and later had his own number one hit, Almost Persuaded.

The British Invasion changed America’s musical tastes overnight and certainly played a big role in the duo’s eventual breakup, but their split was hastened by personal problems as well.  “Grace and I stayed together from ’63 to ’65,” Dale said in an interview conducted in the Denham Springs, Louisiana kitchen of the pair’s former bodyguard, retired Baton Rouge police officer Don “Slick” Owens.  “I was more interested in country music and she wasn’t into country that much.  She sings country now with her brother, Van Broussard, and she does a great job, but she wasn’t interested at the time, so I left.  I went to Atlanta first, then to Panama City, Knoxville, and to Nashville.  I did a couple of songs in Nashville, but nothing ever really hit,” he said.  “I have absolutely no regrets about my career.  We had a lot of fun and I’d do it all over again, but I’d probably sing gospel.”

Dale said he received only about $12,000 for each of the two Top Ten songs, but only after a protracted legal battle. He was also forced to file suit to stop another duet from fraudulently billing themselves as Dale & Grace.  Jimmy Dale Jordan and Grace Sattenfield run their Dale& Grace Ministries.  They claim on their web page that Jordan traveled in the Dick Clark Caravan of Stars “with such stars as Dale and Grace, Dale and Grace, The Dovels, Timi Yuro, and Lou Christie,” and they even hawk their new CD, Dale and Grace – Together Again, featuring “new cuts of the old hits, I’m Leaving It Up to You, Stop and Think It Over, and Darling, It’s Wonderful.”

The real Dale & Grace were inducted into the Delta Music Museum Hall of Fame in Ferriday on April 7, 2007. Dale was scheduled to re-team with Grace Broussard on October 27, 2007, for a special performance at a Louisiana Music Hall of Fame benefit but exactly a month earlier, on September 27th, he was hospitalized with stomach pain and died that night. He was sixty-seven.

On October 27, 2007, Dale & Grace were inducted into The Louisiana Music Hall Of Fame inc eremonies in Baton Rouge, Louisiana. A 1996 film of the duo performing live was preesented via screens, Tommy McLain sang Sweet Dreams, dedicated to Dale, and Grace performed “I’m Leaving It All Up To You’ with Troy Shondell. 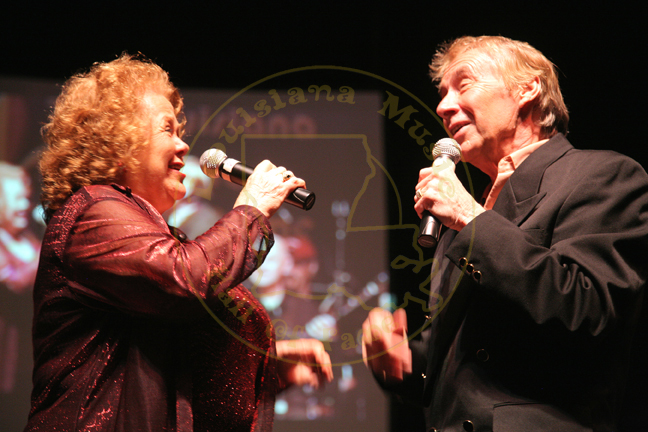 Grace & Troy Shondell perform “I’m Leaving It All Up To You” at Louisiana’s Greatest Hits – LIVE! 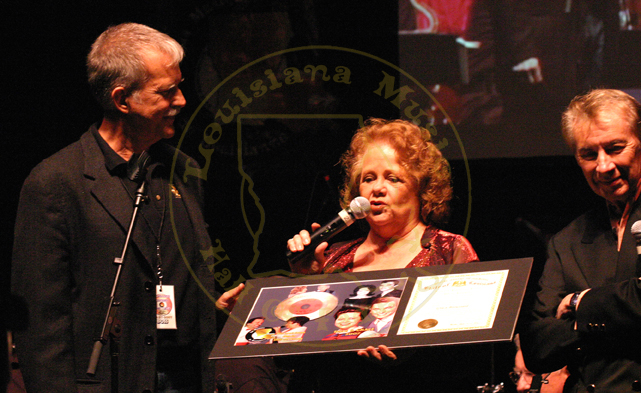