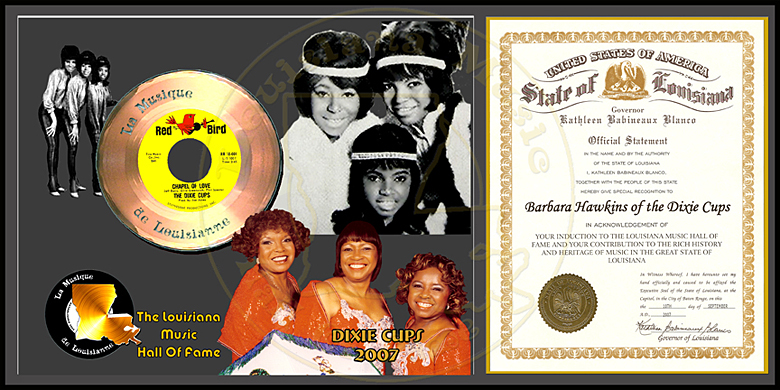 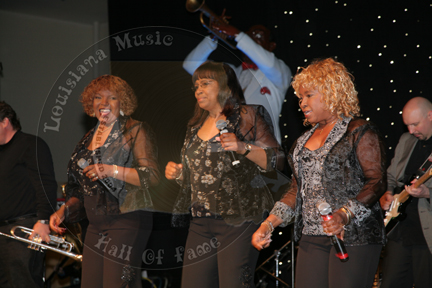 Besides his hit with You Talk Too Much, Joe Jones’s other major contribution to the New Orleans music legacy was the discovery of a group called The Dixie Cups.  The trio consisted of two sisters, Barbara Ann and Rosa Lee Hawkins, and a cousin, Joan Marie Johnson.  Several uninspired names were considered for the three, including the Meltones and Little Miss and the Muffets, before The Dixie Cups was chosen.  In 1964 they traveled with Jones to New York where they were signed by the songwriting team of Jerry Leiber and Mike Stoller for their new record label, Red Bird.  They were still enrolled in school at the time they recorded Chapel of Love that supplanted the Beatles’ Love Me Do as the number one on both the pop and R&B charts in June.  The song remained on both charts for thirteen weeks.  Leiber said it was a song he hated “with a passion,” but it was nevertheless chosen by the Rock & Roll Hall of Fame as number 279 on the list of the 500 Songs that Shaped Rock & Roll. Its success helped get the Red Bird record label up and running and probably helped the label sign another female group from New York City, the Shangri-Las.

For a brief moment in rock & roll history, The Dixie Cups were the premier girl group in America – until the Supremes reached the number one position in both charts two months later with their first hit, Where Did Our Love Go and they would go on to dominate the charts on behalf of the distaff side of the pop music family.

Chapel of Love was written by Phil Spector, Ellie Greenwich, and Jeff Barry and was intended for either the Ronettes or the Crystals.  Spector, in fact, had the Crystals record the song but it was never released, though he did later release a version of the song on a Ronettes album.  The Dixie Cups followed up two months later with People Say, which climbed to number 12 on the pop and R&B charts.

On a roll now, they released You Should Have Seen the Way He Looked at Me which peaked at number 39 in November of 1964, and Little Bell, which made it to number 51.  In May of 1965, they had perhaps their most creative hit and one most closely identified with New Orleans.  Early in 1965, the three had just completed a recording session and were clowning around in the studio, tapping on ashtrays with drumsticks and singing a call-and-response Mardi Gras Indian chant Barbara remembered hearing her mother sing.  They didn’t realize that Leiber and Stoller had the tapes running.  They later overdubbed bass and percussion and Iko Iko, their last hit, climbed to number 20 on both the pop and R&B charts.  Allen Toussaint said the expression Iko Iko means, “You can kiss my ass.”  James “Sugar Boy” Crawford, who claims to have written Jock a Mo, from which Iko Iko was taken, says, “I didn’t, and still don’t, have any idea what the words mean.”

The initial success of The Dixie Cups – and the Shangri-Las – was not sufficient to sustain Red Bird Records and with its demise in 1966, The Dixie Cups signed with ABC-Paramount but when no hits resulted, they left New York in 1974 and returned to New Orleans.  Once back home, Rosa Lee and Barbara Ann began successful modeling careers.  When they later started performing again at events like Jazz Fest, their cousin Joan Marie Johnson declined to join them and was replaced by Dale Mickle.

Rhythm & Blues Foundation nominees in 2002, and the foundation honored the Dixie Cups the following year with its Pioneer Award.

On April 14, 2007 at the LMHOF “Legends Of Louisiana Celebration & Inductions” in Mandeville, Louisiana, The Dixie Cups were inducted into The Louisiana Music Hall Of Fame.