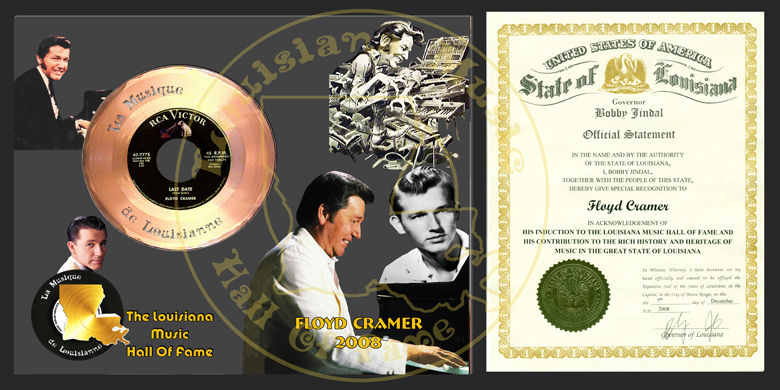 Born in Campti, Louisiana, Floyd Cramer grew up in the tiny sawmill town of Huttig, Arkansas.  By age five, he was teaching himself to play the piano and upon graduation from high school in 1951, he left Huttig for Shreveport and a job as pianist for the Louisiana Hayride.  There he backed up Jim Reeves, Webb Pierce, Hank Williams Sr., Lefty Frizell, and Elvis Presley, among others.  The friendship he made with Elvis at the Hayride developed into a close relationship as the two toured high school auditoriums together throughout Texas in ‘52 and ‘53.

After a year or two alternating between working with Elvis and commuting to Nashville, he approached Chet Atkins about becoming a session pianist.  Encouraged, he made the permanent move from Shreveport to Music City in 1955 and within a year, he was busy day and night playing sessions for various artists.  One of the few times he did not play piano in a session was for Jimmy Dean’s 1961 number 1 smash hit Big Bad John.  For that session, he created the pickaxe sound effect by suspending an iron doorstop from a coat hanger and striking it with a hammer.  By one estimate, Cramer played on one-quarter of all releases during the heyday of the Nashville Sound.  He participated in Elvis Presley’s first recording sessions for RCA after Victor purchased Elvis’ contract from Sun Records in 1955.  Among the songs that came from those sessions were Heartbreak Hotel, Too Much, Hound Dog, Any Way You Want Me, Don’t Be Cruel, I Was the One, Money Honey, and I Want You, I Need You, I Love You.  Others with whom he recorded included Roy Orbison, The Everly Brothers, Patsy Cline, Charley Pride, Connie Smith, Boots Randolph, Chet Atkins, Eddie Arnold, Brenda Lee, Jim Reeves, and Ray Price.

Then, in 1960, Cramer captured lightning in a bottle when he recorded a slow, melodic instrumental ballad entitled Last Date.

It was the first of three consecutive Top 10 songs that would earn him gold records.  The song featured a style of playing called the slip note or bent note where two notes are struck almost simultaneously so that one leads effortlessly into another with a slurred sound.  Last Date, typical of many crossover songs of the day, proved to be a bigger pop hit than country, reaching number 2 for four weeks beginning in December, and remaining on the charts for 20 weeks altogether.  The record that kept it from reaching number 1 was Presley’s Are You Lonesome Tonight on which Cramer also played.

He followed Last Date with On the Rebound, which reached number 4 in April 1961, and San Antonio Rose, which climbed to number 8 in July 1961.  He described Last Date as “a simple melody,” that was played with a solid left hand pattern and a dominant melody with the right.  Following a spate of other songs that were moderate hits, Cramer stopped releasing singles, concentrating almost exclusively on albums, though in 1979 he won a Grammy Award for best country instrumental for the song My Blue Eyes.  His thirty-ninth album, In Concert, was recorded at an unusual venue – in the cafeteria of his ninth-grade daughter’s junior high school in Nashville.  She was on the school’s entertainment committee and prevailed on her father to perform for the school.  Cramer in turn, convinced RCA Nashville Operations Chief Chet Atkins that the album would be a good project.  His instincts were correct as the album turned out to be one of his best efforts.

He once said he didn’t like to practice.  “Practice is work.  I call it play because I enjoy it,” he said.  In 1997, Cramer was diagnosed with cancer and died at his home on New Year’s Eve at the age of 64.

In 2008, Floyd Cramer was posthomously inducted into The Louisiana Music Hall Of Fame.

Inductees Video Gallery under “GALLERIES” on this site.