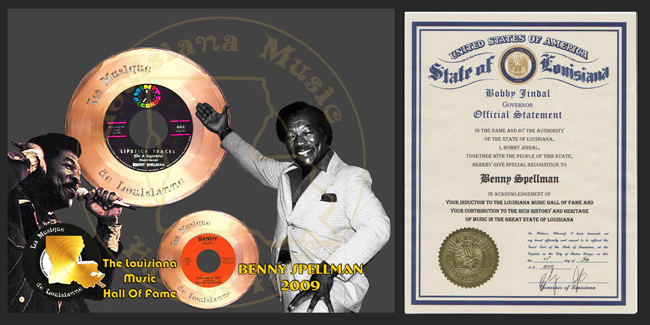 Benny Spellman (Dec. 11, 1931-June 3, 2011) was not initially drawn to music; his first love was football. While attending Southern University in Baton Rouge on a football scholarship, the Pensacola, Florida, native began singing with a local jazz group led by Alvin Battiste. His musical career was interrupted by an army tour of duty and afterwards, he returned to Pensacola. 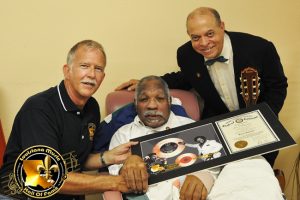 It was by pure chance that Spellman ran into Huey “Piano” Smith and the Clowns at a show in Florida in 1959. The band had wrecked its truck on the way to the show and Spellman volunteered to drive them back to New Orleans. Smith subsequently invited Spellman to join the Clowns, and he remained in New Orleans. While there, he renewed his friendship with guitarist and Dew Drop Inn bandleader Edgar Blanchard who coaxed Spellman onto the stage to perform. Club owner Frank Painia was impressed with Spellman’s voice and offered him residency at The Dew Drop.

The timing was perfect for Spellman because R&B was flourishing in New Orleans at the time and he signed a contract with Joe Banashak’s new Minit Record label. His first efforts went unnoticed but he made ends meet by serving as a studio session backup singer. He was in the studio when Ernie K-Doe recorded Mother-In-Law. Allen Toussaint, the producer and piano player on the song, was dissatisfied with the sound of the song and called on Spellman to help.

Spellman soon hit Billboard’s Hot 100 with his own double-sided hit, Lipstick Traces (on A Cigarette) b/w Fortune Teller which reached number 80 in June of 1962 and remained on the charts for six weeks. Both songs were compositions of Toussaint. Several groups, including The Rolling Stones, later covered Fortune Teller, and the O’Jays covered Lipstick Traces. Nothing else ever clicked for Spellman and he finally left the music business in 1968, choosing to become a beer salesman for Miller Beer in his hometown. His one attempt at a comeback in the late ‘80s was cut short by a stroke and he now lives in Pensacola.

On July 11, 2009, at his assisted living facility in Florida, Benny Spellman was inducted into The Louisiana Music Hall Of Fame. Click HERE to view the heart-warming Induction video of Benny with Deacon John, or visit Benny’s Galleries Musique “Inductees Videos” section to see the full video, including Deacon John’s “Many Rivers To Cross.”