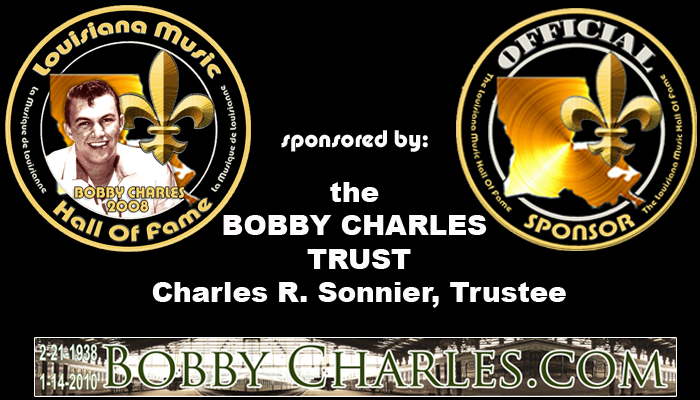 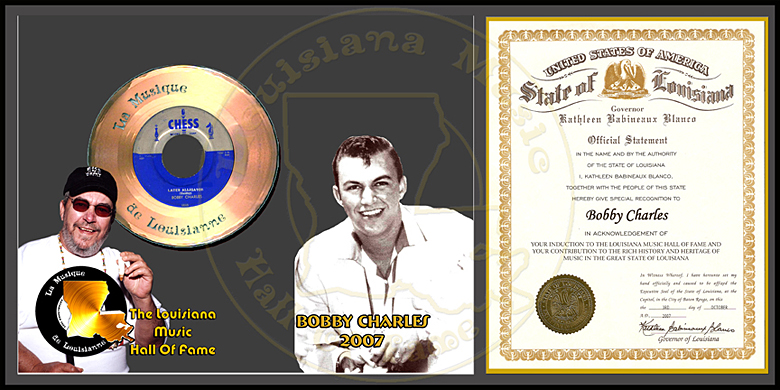 Bobby Charles Guidry, like Fats Domino, Freddy Fender, Gatemouth Brown, Irma Thomas, and others, lost everything he owned to a hurricane in the fall of 2005.  Unlike the others who were victimized by Katrina on August 29, Charles lost his home to Hurricane Rita when it struck southwest Louisiana on September 24, leveling practically every building in Cameron Parish where Guidry lived.  Born in Abbeville, Louisiana on February 21, 1938, Guidry grew up listening to Cajun music but discovered rock & roll as a teenager and soon was singing at local dances with a band called the Cardinals.  During this time he penned a song called See You Later Alligator.  Charles said he had a long-running routine of saying, “See you later, alligator” to friends.  One night when he was leaving a dance, his piano player was seated in a booth and he gave him his familiar farewell.

There were a couple of people in the booth with him and one of them responded with something about a crocodile. He asked her to repeat it and she said, “After awhile, crocodile.”  Charles thanked her, went straight home and wrote the song in twenty minutes.  His father, who had to get up at five a.m. to go to work, kept yelling at him to turn out the light and go to bed.  “I kept saying, ‘Give me five more minutes.’  I had to sing it to myself over and over so I wouldn’t forget the words.”

Every song he wrote has its own story but he maintains he never sat down for the explicit purpose of writing a song.  “When they come, they come,” he said.  “It’s like the song’s already written and it just takes something or somebody to punch that button to let it out.”  Once, he said his wife was yelling at him while he was taking a bath.  “I said, ‘Why don’t you bring me paper and a pencil and just leave me alone?’  She said, ‘You and your damn paper and pencil.’  That’s how I wrote The Jealous Kind.  Same thing with Before I Grow Too Old: she said, ‘You gonna be like this for the rest of your life?’  I said, ‘I’m gonna try and hurry up and do as much as I can before I grow too old.’  Bam!  Bring me a paper and pencil!”

A record store owner in Crowley heard See You Later Alligator, liked the fourteen-year-old’s song and got Guidry a telephone audition with Chess Records founder Leonard Chess.  Chess also was impressed with the song and arranged a recording session at Cosimo Matassa’s studio in New Orleans.  Upon entering the studio, Charles found that Fats Domino’s band had been booked to back his recording session.  He balked at the arrangement, insisting instead on using the Cardinals.

Upon hearing the recording, Chess signed Guidry to a recording contract sight unseen, learning only later that he was not black, but a white Cajun.  Phil Chess met him at the Chicago airport and his first reaction was to say, “You can’t be Bobby Guidry.”  Upon assuring him that he was Guidry, Chess said, “Leonard’s going to shit but there’s nothing we can do about it now; the record’s already out and it’s a hit.”

He changed his name to Bobby Charles after signing with Chess.  His Chess release of See You Later Alligator reached number 14 early in 1956.  Five months later, he charted again with Only Time Will Tell, which went to number 11.  Ironically, though he was white, neither of his songs made Billboard’s Hot 100 chart; both appeared instead on the R&B charts, indicating, apparently, that record buyers also thought he was black.  Bill Haley released See You Later Alligator almost simultaneously to Charles’s release and his version climbed to number six on Billboard’s Hot 100 chart in early 1956.

The only white artist on a black label, he began touring with an all-black band along with Chuck Berry and Frankie Lymon & the Teenagers.  They were touring Mississippi and were at the University of Mississippi for a gig when he had to go to the restroom.  He was followed into the restroom by several Ole Miss football players who were unhappy that he was riding with Chuck Berry.  Berry, however, had seen the players enter the restroom after Charles and suspected they weren’t seeking autographs so he and several other band members went in after the players.  “Chuck and the others saved my damn life,” Charles said.

Charles moved to Imperial Records in 1958 but was unable to repeat his Chess successes.  His reputation as a songwriter continued to manifest itself, however, when he wrote Walkin’ to New Orleans for Fats Domino.  The song climbed to number six on the pop charts in August of 1960 and to number two on the R&B charts.  In January of 2007, the song was featured in an episode of ABC-TV’s Boston Legal that was set in New Orleans.  In 1961, another Bobby Charles composition, Clarence “Frogman” Henry’s (I Don’t Know Why) But I Do reached the number four position on Billboard’s Hot 100 and number nine on the R&B charts.  The song was given new life when it was included in the soundtrack of the 1994 Academy Award-winning movie Forrest Gump.

When he wanted to start his own publishing company, Leonard Chess told him he was making a mistake – most likely self-serving advice.  Charles, determined to take control of his own songwriting career, left Chess and entered into a partnership with Stan Lewis, owner of the Shreveport-based Paula and Jewel record labels and who had helped launch the career of Dale Hawkins and his 1957 hit, Susie Q.  While there, Charles recorded Just the Jealous Kind.  A dispute over royalties to the song led to Charles’s departure from Paula/Jewel.  Lewis didn’t live up to their agreement, Charles said.  “Stan stole the damn label, keeps the label to himself, and takes half of all the songs and the publishing.  I said, ‘I ain’t getting screwed again,’” he said.

Charles, who neither plays an instrument nor reads or writes music, simply came up with a concept, jotted down the lyrics, and sang it into a recorder or to a musician.  “It only takes me twenty to thirty minutes to write a song,” he said.  “It’s got to come from my heart, or it ain’t worth nothing to me.  When anybody does one of your songs, it’s like they’re giving you the nicest compliment they can possibly give you.  If they like it that much and want to sing it, it makes me feel good about it, too.”

In October of 2007 at his home in Abbeville, Louisiana, Bobby Charles was inducted into The Louisiana Music Hall Of Fame.

Be sure to visit Bobby Charles' Video Gallery and Inductees' photo and memorabalis Gallery under "GALLERIES MUSIQUE" on this site. 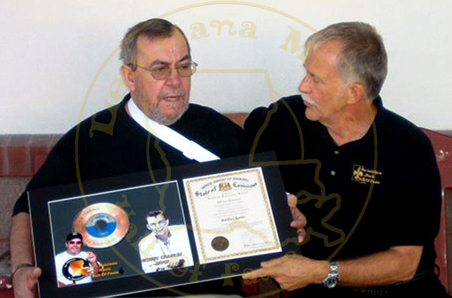 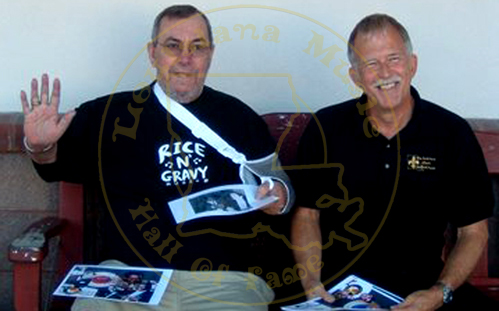