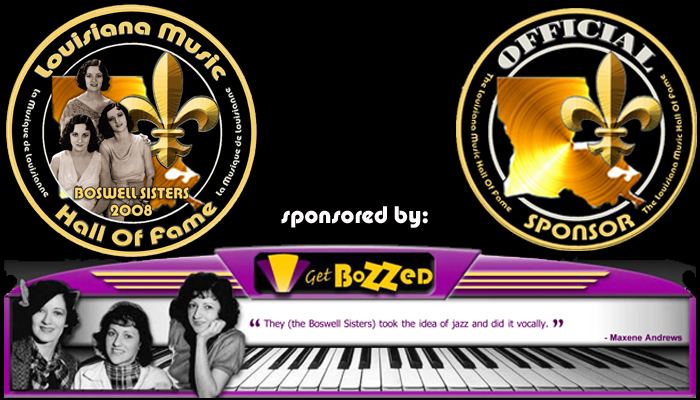 Reared in a middle-class household on Camp Street in the uptown section of New Orleans, the Boswell sisters somehow got close enough to the black community to absorb Southern gospel and blues.  They also had one of, if not the earliest number one national hit for a song by a New Orleans artist – or artists.

Connee, paralyzed from the waist down from either a childhood accident or polio, played cello, saxophone, and guitar while sitting.  Martha played piano and Vet played violin, banjo, and guitar.  All three sang vocals. The sisters began performing at classical and semi-classical music on a local radio station in 1925 but their careers took off when a New York station gave them a national daily singing program.  They also performed at vaudeville houses around New Orleans

They had their first recording session with the Victor label before moving to Okeh Records, cutting four songs for the label in 1930.  Their popularity was such that they were subsequently signed by Brunswick Records and from 1930 to 1936, they were the most popular vocal group in the U.S., recording many of their songs with the Dorsey Brothers and Benny Goodman orchestras.  They also became regulars on Bing Crosby’s radio program.

Shout, Sister, Shout! Was their signature song but they had other hits as well.  They included When I Take My Sugar to Tea, Dinah, I’m Gonna Sit Right Down and Write Myself A Letter, Roll On Mississippi, Roll On, It’s The Girl, Shuffle Off to Buffalo, and interestingly enough, Rock And Roll.  Though the song was from the Jack Benny film Transatlantic Merry-Go-Round and the song was about the “rocking and rolling” of the sea, it may well have been the very first song to coin the term rock and roll. 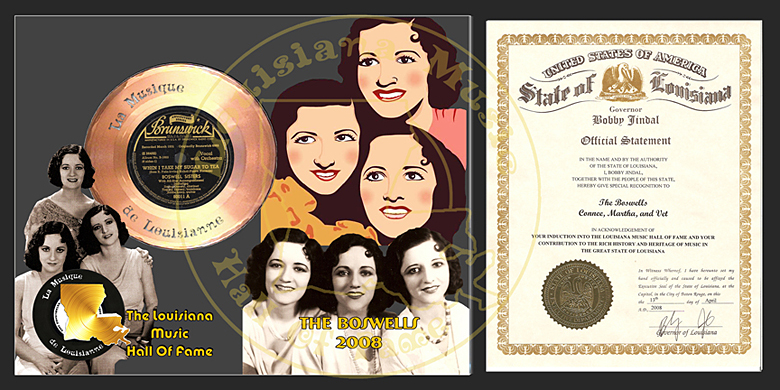 They appeared in several movies, including The Big Broadcast in 1932, in which they sang Crazy People with Cab Calloway, Crosby, and the Mills Brothers.  Their music was also featured in the 2006 Sean Penn film All The King’s Men, the fictionalized account of the career of Louisiana Gov. Huey P. Long.  In 1935, they reached the top of the Hit Parade with The Object of My Affection, from the movie Times Square Lady. The following year both Martha and Vet retired from the group in favor of marriage.  Connee continued on as a solo act and had two more number-one hits with the Bing Crosby duets Bob White (Whatcha Gonna Swing Tonight) and Alexander’s Ragtime Band.  She continued singing into the ‘60s.

The Boswells were later emulated by the Andrews Sisters and Ella Fitzgerald first patterned her singing style after that of Connee.  In 2001, The Boswell Sisters, a musical play based on their lives, played at the Old Globe Theater in San Diego.  Produced by the same that produced Forever Plaid, it was a critical success but was not picked up for a Broadway run.

On April 13, 2008, The Boswells – Connee, Martha & Vet were inducted into The Louisiana Music Hall Of Fame at the NOLA.com stage at French Quarter Festival.

To learn and experience more, please visit The Boswells’ Inductees (Photo & Memorabalia) Gallery and their Inductees Video Gallery under “GALLERIES MUSIQUE” on this site.

*Bio courtesy of Tom Aswell – Author of “Louisiana Rocks – The True Genesis OF Rock And Roll”  More info on The Boswells is available at www.bozzies.com.

Be sure to visit The Boswells’ Video Gallery and Inductee’s Photo & memorabalia Gallery under “GALLERIES MUSIQUE” on this site.