Born in Lettsworth, Louisiana, Buddy Guy was a protégée of Muddy Waters and Guitar Slim.  He began performing with Baton Rouge bands in the early 1950s.  Guy left Baton Rouge blues clubs for those of Chicago in 1957 and in the ensuing years, he became known as the bridge between blues and rock while earning the open admiration of guitar virtuosos Eric Clapton, Stevie Ray Vaughan, and Jimi Hendrix. He racked up a handful of Grammy awards, and opened one of Chicago’s most successful blues clubs.

Arriving in Chicago on September 25, 1957, he was stranded for three days with no food but vowed he would die before selling or pawning his guitar, he told Rolling Stone in 2003.  A man saw him and asked if he could play the blues.  The stranger took him to a renowned blues club called the 708 Club.

Guitar Slim was there, Otis Rush was onstage, and Little Walter was playing harmonica.  Determined to succeed, Guy learned from Muddy Waters and soon established himself as a force to be reckoned with when he displayed his unique showmanship by walking into the audience while playing in much the same manner as he’d seen Guitar Slim do back in clubs around New Orleans.  Guy said Guitar Slim was the first guitar player he ever saw perform.  “I must’ve been thirteen,” he said.  “He came out riding that guitar, wearing a bright red suit and I thought right then that I wanted to sound like B.B. King but I wanted to play guitar like that.”  As his homage to Slim, he cut a record entitled You Sure Can’t Do.  During his career, he recorded for several labels, including Cobra, Chess, Atlantic, Vanguard, and Silvertone.

In February 1965 he made his first trip to England, sharing a bill with the Yardbirds.  During the tour, Rod Stewart served as his valet.  Clapton, a member of the Yardbirds, once told Guy he’d driven a great distance and slept in his van in order to get a chance to hear him play.  Clapton would later admit he got his idea for a blues-rock trio while watching Guy’s trio perform in England during that tour.  “Buddy Guy was to me what Elvis was for others,” he said, calling Guy the “best guitar player alive.”  Guy said he played with more energy back then, playing guitar with his feet and throwing it up in the air.  Despite his success in Britain, he still had no record.  He thought it was because he played too loud and too much feedback until he saw Clapton and Hendrix selling millions of albums using the same techniques – techniques they’d learned from him.

In 1970, Clapton co-produced an album for Atlantic Records, Buddy Guy & Junior Wells Play the Blues. He won his first Grammy in 1991 with his Silvertone album Damn Right I’ve Got the Blues, and picked up his second award in 2003 with Blues Singer, performed exclusively on acoustic guitar.

When crossover audiences discovered him in the late ‘60s, they mistakenly thought he was ripping off Jimi Hendrix rather than the other way around.  The truth wasn’t forthcoming until a 1968 videotape revealed Hendrix squatting near Guy, taping his concert.  Hendrix was so determined to learn from Guy that he occasionally canceled his own concerts in order to attend Guy’s club dates.

Honors bestowed upon Guy include five Grammy awards (including Grammies for his first three Silvertone releases); 23 W.C. Handy Awards (most of any blues artist), and Billboard’s Century Award for “distinguished artistic achievement.” Other honors include the Baton Rouge Blues Foundation’s Slim Harpo Award, induction into the Rock & Roll Hall of Fame in 2005, and the Congressional Medal of Arts recognizing him as the Greatest Living Electric Blues Guitarist.  Just before his death, Muddy Waters told Guy, “Don’t let them goddamn blues die with me.”

On April 16, 2008, Buddy Guy was inducted into The Louisiana Music Hall Of Fame in performance at The Texas Club in Baton Rouge, Louisiana, with the participation of his friend, Baton Rouge Mayor “Kip” Holden. 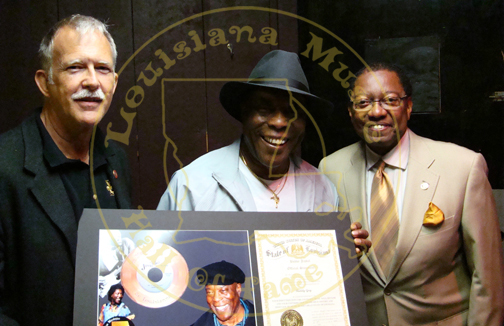 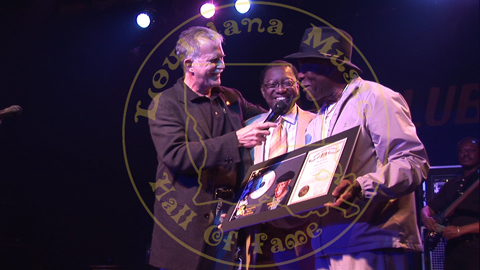