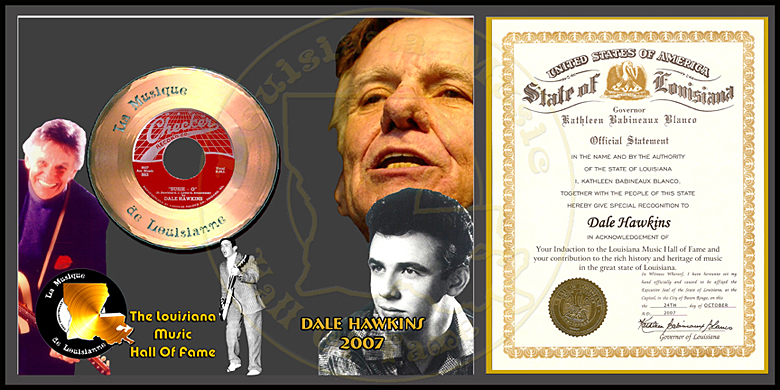 Toussaint was looking over merchandise at a souvenir booth when a woman asked him if he knew Dale Hawkins.

was his gentle response.

Born Delmar Allen Hawkins on August 22, 1938, in the village of Goldmine, Louisiana, he was an early innovator of

American rock & roll as a singer, songwriter, and rhythm guitar player.  “Goldmine is near Mangham, Louisiana,”

Hawkins said, laughing.  “If you don’t know where Mangham is, it’s just up the road from Jerry Lee Lewis’s hometown

of Ferriday and if you don’t know where that is, it’s just across the Mississippi River from Natchez, Mississippi.  Beyond that,

I can’t help you much.”  His mother was a schoolteacher at the tiny community’s only school and his father was a sharecropper.

“My father paid the doctor who delivered me two dollars a month until the twelve dollar delivery fee was paid in full,” he said.

His parents separated when he was three and his father subsequently died in a fire.  Dale was shuttled back and forth among a

succession of share-cropping relatives in the Mangham area.  It was while working in the cotton fields that he first became

exposed to blues as he toiled alongside black field hands.  It was also while attending elementary school that he met Carl Adams.

Adams had lost two fingers at age five in a tragic shotgun accident that killed his two-year-old cousin.  He became one of

a succession of skilled guitarists who worked with Hawkins during an outstanding career that has spanned nearly half a century.

Hawkins joined the Navy at age sixteen and upon his discharge a year-and-a-half later, took a job as a counter clerk in Stan’s

Record Shop in Shreveport.  The store was owned and operated by Stan Lewis who was instrumental in the recording c

areer of his clerk as well as many other performers in the Shreveport and East Texas area.  The jukeboxes of the time were

on the R&B hits as he sold them by day and sang them at night in various dives along the Bossier Strip.  The clubs of the

As a young man, Hawkins, like many of his contemporaries, found himself at the right place at the right time with the right sound.

America was emerging from the post-war doldrums.  Teenagers were weary of the endless list of stodgy ballads churned out by

boring crooners with the complicity of the handful of unimaginative major recording companies that monopolized the music industry.

The time was never better for white acceptance of rhythm & blues.  It was also the right time for “hillbilly” music, to morph into

Houston, and Lake Charles as well as in hamlets like Crowley and Ville Platte got in on the action.  In short, the timing was right

for anyone anywhere to take advantage of the blasé attitudes permeating the boardrooms of the four major recording companies.

And radio, to be sure, was positioned perfectly to take full advantage of this fortuitous trifecta of good timing.

and Dale Hawkins, all regulars on the Louisiana Hayride.  In 1956, Hawkins, while playing the clubs along the Bossier Strip,

began experimenting with a song he’d written.  The song, influenced by what Scotty Moore was doing on guitar for Elvis, still had

its own Louisiana sound that featured a heavy blues influence.

“It took five months for me to get Suzy Q right,” Hawkins said, “and in 1957 we paid KWKH engineer Bob Sullivan $25

for studio time when the station went off the air at midnight for equipment changes.  Sullivan was the engineer on the song and

I was the producer.  It took us seven takes to get it down right,” he said.  Besides Hawkins, the band included bassist Joe Osborne,

lead guitar.  All were from Shreveport.  Susie Q kicked off with the rhythmic beat of a cowbell as Burton fell in on guitar before

Hawkins came in on the vocal.  “It was a one-track recording because we didn’t have multi-track tapes back then,” Hawkins

said.  “Our band had the riffs for Suzy Q for some time, and we kept putting them together until one day I finally said, ‘That’s it.’”

He said.  “It was just sheer sound and it worked.  We went into KWKH in Shreveport to cut the song.  I know that sounds unusual

today, but they used to do a lot of recording there.”

The tape was sent to Chess Records in Chicago because his boss, Stan Lewis, had once worked with Leonard Chess before

moving back to Shreveport.  Leonard Chess told Hawkins he wanted the song but after several weeks passed with no word

from Chess, Hawkins sent a copy of the tape to Jerry Wexler at Atlantic Records and Wexler put the word out that if Chess

wasn’t interested, he was.  Two weeks later, Chess released the record and it broke in different parts of the country at

different times.  “We knew it was a hit after only a week and a half,” Hawkins said.  Independent labels like Chess were

coming into their own about this time because major labels like Capitol, Columbia, Decca, and RCA weren’t interested in the

new sound of popular music, which they considered a passing fad.  It was Stan Lewis, taking advantage of his friendship with

Leonard Chess (he was the biggest distributor of Chess and Checker records in Louisiana), that resulted in the management

deal with the Chicago record label.  “The special sound of the guitar was a reverb technique they added in Chicago,”

Hawkins said.  “The basic sound was ours, though, heavy on Louisiana influence, with some blues.”

Payola can take on many forms, from cash to gifts to vacations for deejays who promote records.  Sometimes it can even

adversely affect an artist.  In the case of Suzie Q, Hawkins and Burton collaborated to compose the song, but when Chess

issued the record, Burton was not credited.  Writers named on the Suzie Q record were Hawkins, Stan Lewis, and Eleanor

Broadwater.  Broadwater, it turned out, was the maiden name of the wife of WLAC deejay Gene Nobles.  The one-third of

composing royalties was Chess’s way of thanking Nobles for promoting the label’s records on the Nashville station.

adding that it was “two minutes and sixteen seconds of flawless music.”  Rock & Blues News said it was a record “that

helped define just exactly what was (and what was not) rock ‘n’ roll.”  Susie Q was chosen as one of the Rock & Roll Hall

of Fame’s 500 Songs that Shaped Rock & Roll and Offbeat Magazine, a New Orleans publication, included the song on

its list of the 100 Most Essential Louisiana CDs.   Creedence Clearwater Revival covered the song to launch the career

seven on the R&B chart.  It remained on the pop chart for nineteen weeks.  Hawkins followed that with La-Do-Dada (number 32)

April 1959.  He was smart enough to draw on his early experience in production in the KWKH studios with Merle Kilgore

and Johnny Horton.  He turned that experience into a successful career in producing hits for Joe Stampley and The Uniques

(Not too Long Ago), The Five Americans (Western Union), and Bruce Channel (Mr. Bus Driver), as well as songs by The

In Crowd, Michael Nesmith, John Fred, Ronnie Self, and Harry Nilsson.  He worked for a time as A&R (Artist & Repertoire)

representative for RCA Records.  In that capacity, he scouted for rock & roll groups all over the country, but mainly in the

Texas-Arkansas-Louisiana area.  “If anyone can sniff out a funky-rock hit, he can,” said Dick Moreland, West Coast Manager

of Rock Music for RCA.   Along the way, he also hosted The Big Beat, aka The Dale Hawkins Show on WCAU-TV in Philadelphia.

Though only four of his songs made the charts, the old rocker is still at it.  In 1998, Ace Records released a compilation

got rave reviews in Rolling Stone.  A member of the Rockabilly Hall of Fame now living in Arkansas, he continues to

play events throughout the U.S., including New Orleans Jazz Fest and the Ponderosa Stomp.  “Cream of the crop at the

Stomp,” one fan said of his performance at the 2002 Ponderosa Stomp.  “He had more energy than any performer

High Times said he had “the type of wild genius it takes to create truly inspired rock & roll.”

that he “returns rock & roll to its roots like few other ‘50s originals can still do.”

It may be one thing to reap the praises of rock critics, but quite another when fellow performers contribute their own plaudits.

Roy Buchanan, one of several top guitarists who worked with Hawkins through the years, said of a performance with Hawkins:

“I was adequate, but Dale would really make you work.  He wouldn’t leave you alone for a second and I was all for that.”

of the British Invasion – the missing link between Hank Williams and Elvis Presley and the Yardbirds and Led Zeppelin.

previous year.  Hawkins, who was scheduled to perform, had to cancel when he was diagnosed with colon cancer.

On February 9, 2006, he posted a message on the Dale Hawkins News web page in which he said he left the hospital on

February 8 following his fourth chemo treatment.  “My doctor went over my progress since the operation with a smile,” he said.

“My white blood count was back to normal and all of the other charts that he showed me were beautiful.  I have not had any

bad side effects from the chemo.  I am starting to get my strength back and my attitude is still on its positive kick-ass mode.

I am continuing with the treatment and with your prayers and by the grace of God (I) will win.  Thank you!!”

Another message posted on his condition on May 25 said he had gained weight and doctors were pleased with his progress.

“Many of you who have been aware have been so supportive and he extends his thanks to all for the prayers, cards, emails,

calls, and overall concern,” it said.  He continues to perform and appeared in Baton Rouge on October 27, 2007 at the LMHOF

Dale Hawkins, at that event was inducted into The Louisiana Music Hall Of Fame. 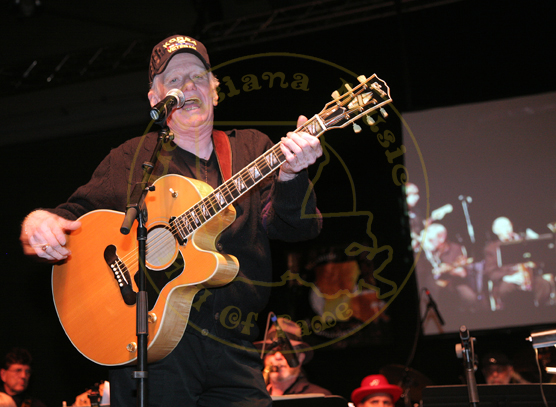 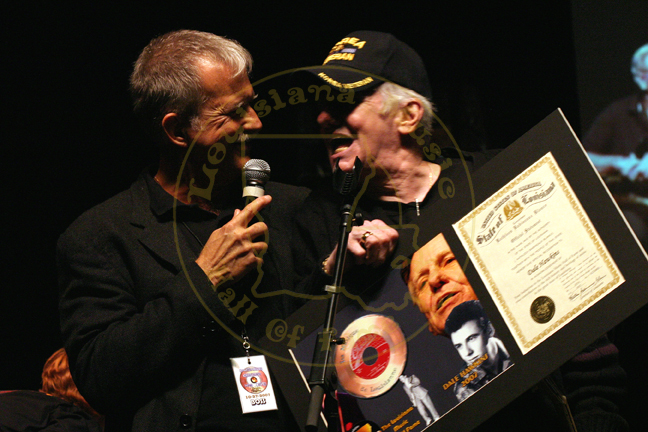 More info on Dale Hawkins is available at www.dalehawkinsmusc.com.