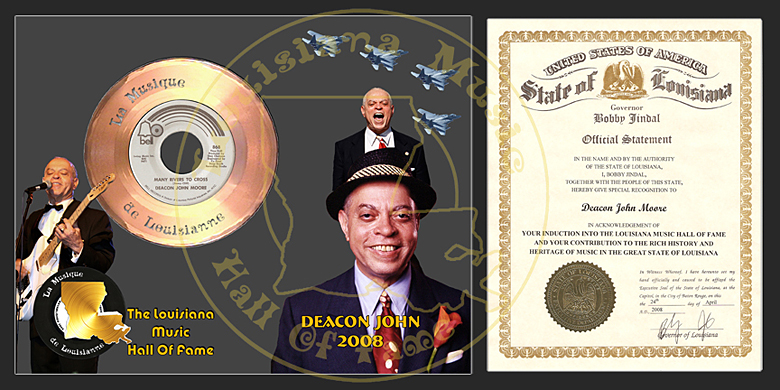 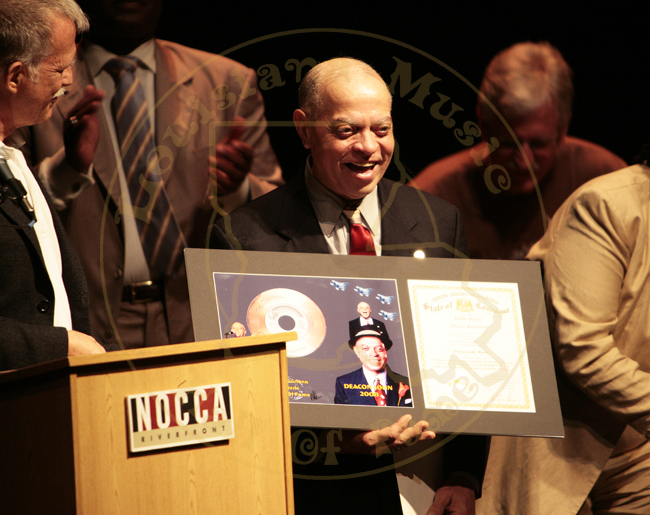 The guitar riffs of Deacon John Moore can be heard on literally hundreds of those historic New Orleans recordings that produced so many R&B and rock & roll hits of the ‘50s and early ‘60s.

Moore was one of thirteen children reared in a musical family.  He began his career singing in his church choir. After purchasing a pawn shop guitar he fell under the influence of Roy Montrell, Justin Adams, and George Davis.  Davis and Deacon John can be heard trading guitar licks on Robert Parker’s Barefootin’.

Other artists for whom he played sessions are Ernie K-Doe (Mother-In-Law), Lee Dorsey (Working In A Coal Mine), Chris Kenner, (Land of A 1,000 Dances, I Like it Like That, and Ride Your Pony), Irma Thomas (Ruler of My Heart), Aaron Neville (Tell It Like It Is), Allen Toussaint, Fats Domino, Johnny Adams, Little Richard, Dr. John, Benny Spellman, and Wardell Quezergue.  “I played on about 90 percent of everything recorded for Minit Records,” he said.

John Moore is a common name and sometimes talent alone isn’t enough.  He knew he needed something to set him apart from the crowd and for that something, he looked no further than Roy Brown’s 1947 hit Good Rockin’ Tonight.  “He had a line (absent from cover versions) that went ‘Well Deacon Jones and Nelda Brown/Two of the sleekest cats in town/They’ll be there, just wait and see/Stomping an’ jumpin’ at the jamboree.’  I took the name ‘Deacon’ from that song,” he said.

Deacon John and the Ivories played as the house band at the College Inn in Thibodaux.  “We played behind a different artist every Sunday,” he said.  “People would come from miles around and park all along the highway.  I played for local acts like Huey Smith and the Clowns and for national acts like Chubby Checker, the Midnighters, Marvin Gaye, Wilson Pickett, and Little Esther.

Moore was inducted into the Louisiana Blues Hall of Fame in 2000 and in 2006 he became president of New Orleans Local 174-496 of the American Federation of Musicians.

On April 24, 2008, in ceremonies hold at NOCCA in New Orleans, Deacon John (Moore) was inducted into The Louisiana Music Hall Of Fame.