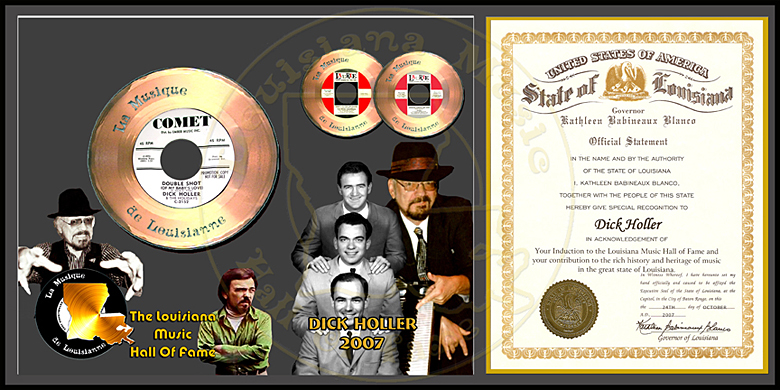 Born on October 16, 1934, in Indianapolis, Indiana, he moved with his family to Baton Rouge in 1951.  He graduated from University High School the following year and attended LSU for five years.  It was while attending LSU that he began to play piano and organizing bands with his college friends.  Holler performed for two years on the local award-winning WBRZ-TV teen show Hit or Miss.  Others who performed on the show were future actresses Donna Douglas and Elizabeth Ashley, and movie critic Rex Reed.  Holler also appeared occasionally on deejay Dave Davidson’s Saturday morning radio show Teen Town Rally.  It was during a January 1956 Teen Town Rally show that he met Jimmy Clanton and brothers, Ike and Tommy.  Jimmy was a student at Baton Rouge High at the time and he and his brothers were singing the Cadillacs’ song Speedoo.

“They were quite precocious,” Holler remembers.  “I tried to sign Jimmy on the spot,” he said, “but his mother informed me Jim was playing with the Dixie Cats.  She then asked if I would consider using Ike.  Ike was a fine musician, versatile on banjo, mandolin, guitar, and bass.  I was unaware of his versatility as he was playing mandolin that day.  I needed a great electric guitar man and that was Jimmy Clanton – the best young guitarist in southeast Louisiana.”

Undaunted, Holler asked Clanton to play with his band, The Nightrainers, when he wasn’t working with his own band, the Dixie Cats.  “So, we did a few gigs together at the Old State Capitol Building,” he said.  “Then in May of 1956, I was able to book a four-piece, four-night-a-week gig at Neil Morehouse’s Wagon Wheel on Airline Highway in Baton Rouge.”

The band included Holler on piano, Jimmy Clanton on lead guitar, Mike Bankston (a Baton Rouge High sophomore) on drums, and LSU sophomore Ed Winston on tenor sax.  Occasionally Leonard Root, a senior at University High, would perform on bass.  “That engagement lasted three months and we slowly improved and in September of 1956, we began working at Club Carousel in Baton Rouge, the most important blues club in southeast Louisiana” Holler said.  “We played on Sunday afternoons and on Monday, Tuesday, and Wednesday nights, which left weekends open for casual gigs in other towns and states.  The club changed our name to Dick Holler and the Carousel Rockets, but we shortened it to The Rockets.”

Musicians who rotated in and out of The Rockets included Mac Rebennack (aka Dr. John), Cyril Vetter and his brother Keith, Grady Caldwell, Bobby Loveless, Jack Bunn, Junior Bergeron (who still performs with Van Broussard), Ken Veca, Buck Rodriguez, Ed Hubbard, Lenny Capello, Johnny Holley, Glen Delatte, Kenneth Webb, Don Smith, Merlin Jones, and Bob Adams.  By 1957 The Rockets were cutting demo tapes of song ideas at Cosimo Matassa’s Studio on Governor Nichols Street in New Orleans, Holler said.  “Coz (Matassa) is a great guy and the South’s all-time top recording engineer and producer,” he said.  “He got us our first record deal and still comes to our Original Rockers Reunion every year at the Eagles Club in Baton Rouge.”

He said Jimmy Clanton was initially reluctant to write any songs, “but the advantage of creating original compositions soon became evident to both of us.  Holler did not collaborate with Clanton in writing Clanton’s first hit song Just a Dream.  “I was in the same room, though, writing songs,” he said.  “We held several writing sessions at Jimmy’s, Leonard Root’s, and my house.  Jimmy and I got separate recording deals on Johnny Vincent’s Ace Label and The Rockets backed Clanton on his first release, I Trusted You, and That’s You Baby, which got significant air play in late 1957.”

Matassa was managing Clanton by this time and he called in the regular New Orleans session crew to play on Jimmy’s next record, Just a Dream.  Soon after that, Clanton embarked on a solo career and Holler continued to front The Rockets for two more years until he was signed by Herald-Ember Records in 1961.  Other prominent artists on Herald-Ember were Maurice Williams and the Zodiacs (Stay), The Five Satins (In the Still of the Night), The Silhouettes (Get a Job), Lee Allen (Walkin’ with Mr. Lee), and Cajun humorist Justin Wilson.  “They (Herald-Ember) wanted a name change, so The Rockets became Dick Holler and the Holidays,” he said.  He and The Holidays left Baton Rouge in August 1962 and performed and recorded until May of 1965 in and around Columbia, South Carolina.  “Our records were selling there, so we went where the action was,” he said.  “Our third single was Double Shot of My Baby’s Love, written by Don Smith and Cyril Vetter,” he said.  The song didn’t become a hit until 1966 and then by a group called The Swinging Medallions.  Holler’s next effort was I’m Leaving It All up to You, which had been a number one song for Baton Rouge duet Dale & Grace in 1963.

The future appeared bleak when Herald-Ember folded in 1964 following the payola investigation of 1959-1962. Holler disbanded The Holidays, and Phil Gerhard, his producer returned to law school.  Holler, however, was far from finished and he has one of America’s most popular comic strips to thank.  Beginning in 1957, when he started collaborating with Jimmy Clanton, Holler wrote a string of hits that collectively, have sold more than 35 million records.  One of those hits came almost as an afterthought.  In early 1966, cartoonist Charles Schultz introduced the never seen Red Baron into the Peanuts comic strip.  “Phil Gernhard jumped into action and rewrote one of my songs and Snoopy vs. the Red Baron was born,” Holler said.  A garage band from Ocala, Florida calling itself The Royal Guardsmen entered a studio in 1966 to record an album for their label, Laurie Records.  The collection of numbers on the album included covers of Alley Oop, Liberty Valance, L’il Red Riding Hood, and Battle of New Orleans.  When they were finished, they still had some studio time left, so the band decided to record the novelty number co-written by Holler and Gernhard.  Laurie executives were so impressed with Snoopy vs. the Red Baron that they decided to release it as the group’s first single.  The song became an instant hit when a local deejay began playing it two weeks later.   It caught on locally first and then caught fire across the U.S. during the Christmas season. By January 1967, it had peaked at number two in the U.S. (behind the Monkees’ I’m a Believer) and number eight in the U.K., remaining on the charts for twelve weeks.  “We sold six million records of Snoopy,” Holler said.  “Then Dion Dimucci’s version of Abraham, Martin and John (also written by Holler) made the Top Five and was covered by about twenty artists, including Ray Charles, Whitney Houston, Tori Amos, Marvin Gaye, Smokey Robinson, Kenny Rogers, Harry Belafonte, Lobo, Cher, and the Bellamy Brothers.  Garth Brooks and Bob Dylan also performed the song in live concerts.

Abraham, Martin and John, a song lamenting the violent deaths of Abraham Lincoln, Martin Luther King, Jr., and John and

Robert Kennedy, was considered of such significance that it was the first of twenty songs discussed in Songs Sung Red,

White, and Blue: The Stories Behind America’s Best-Loved Patriotic Songs, a book by Ace Collins.

“It wasn’t a protest song,” Collins wrote.  “It wasn’t an anthem it wasn’t a flag-waving ballad or a gospel standard,

yet it contained elements of each of these styles.  In just four verses and a chorus, it became much more than just another folk-pop standard.

“What Holler’s Abraham, Martin and John accomplished was to voice the pain and anguish of millions and ask the

questions that haunted people all over the world” he said.  “The song did not give answers, but rather pointed out that the

ones who might have had those answers had been needlessly killed.”

Lobo, Cher, and the Bellamys recorded songs that Holler wrote and a German version of Crossfire by the Bellamys sold

won an engineering Grammy for Abraham, Martin, and John in 1969.  He called it “my proudest moment, although

I’m sorry that events conspired that allowed me to write the song.”

One of the most prolific songwriters most people never heard of, Holler’s American classic Abraham, Martin and John

breathed new life into the sagging career of recovering heroin addict Dion DiMucci.  By the early ‘60s, Dion and the Belmonts

broke up because of Dion’s heroin habit that dated back to the age of sixteen.  In early 1968 he and his wife moved to

Miami, where, with help from his father-in-law, he managed to kick the habit just in time to record Holler’s masterpiece.

Dion’s version reached number four in late 1968 and remained on the charts for fourteen weeks.  Besides Dion’s, four

making the song one of the most prestigious songs of the last century.

Except for the three or four months per year that he lives in Zurich, Switzerland while touring throughout Europe, Holler resides

in Marietta, Georgia.  He plays to audiences in Norway, the U.K., Scotland, Germany, Denmark, Poland, Austria, and

Switzerland.  He also had several releases that made the Top Five in Europe.  He co-wrote seven songs with his son David

on the CD Kandlbauer, which debuted on the Official Swiss Charts at number one in August of 2005.  Another son, Reno,

is actively involved in writing in both the U.S. and Europe.

Holler’s son David moved to Switzerland to perform on the piano bar circuit in 1995 and the following year, the elder Holler

followed him.  “It was a dream decision as I love Europe,” he said.  “I chose to live abroad because of the art, architecture,

the history, the quality of life, and the culture.  Also, they like American and British rock and I know all of the songs from

folk rock, and old time rock ‘n’ roll.  “I go all the way back to Big Joe Turner, Louis Jordan, and Louis Prima.”  He said the

songs of Johnny Mercer and Hoagy Carmichael provided the inspiration he needed to pursue songwriting as a career.

“In the words of Joan Jett, my all-time secret babe-o-licious crush,” he said, “I love rock & roll.”

On October 27, 2007 at the LMHOF “Louisiana’s Greatest Hits – LIVE! – Volume 1” concert in Baton Rouge, Louisiana, Dick Holler was inducted into The Louisiana Music Hall Of Fame. 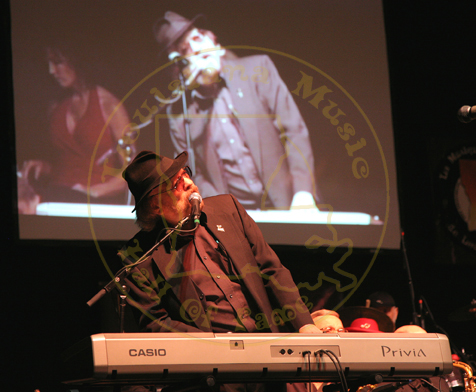 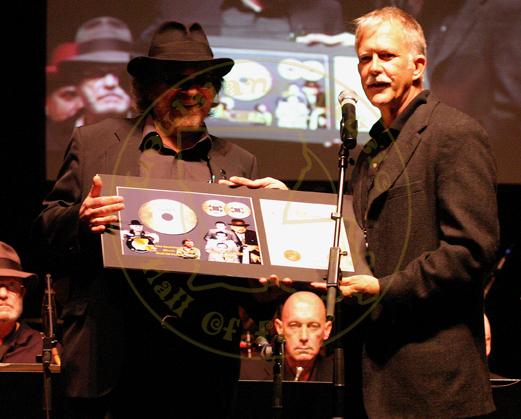 More info on Dick Holler is available at www.dickholler.com.