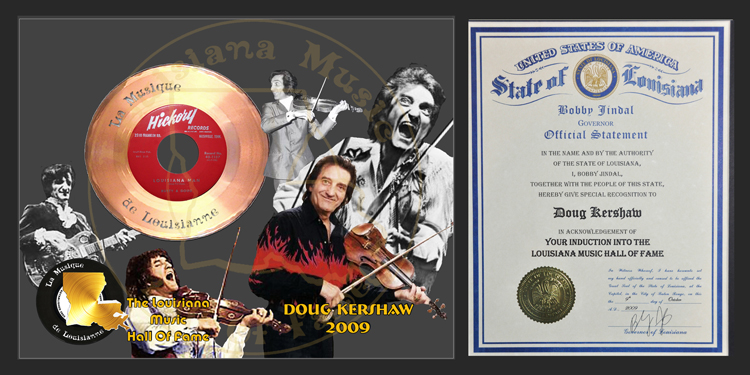 Born in Tiel Ridge in Cameron Parish, Doug Kershaw (Jan. 24, 1936–) is Cajun music’s ambassador to the world, thanks to his 1969 national television debut on the Johnny Cash Show. Two months later, Louisiana Man, recorded in 1961, was the first song broadcast back to earth from the lunar surface by the Apollo 12 astronauts. The song, recorded with brother Rusty Kershaw, was eventually covered by more than 800 artists. Doug signed a contract with Warner Brothers Records in 1969 and he topped off the year with a week-long gig at the Fillmore East in New York as the opening act for Eric Clapton’s Derek & the Dominos.

With his appearance on the Johnny Cash Show, Doug’s popularity skyrocketed, though in reality, he and Rusty had already sold more than eighteen million records. Louisiana Man was a Top Ten country hit on the Hickory label and Diggy Liggy Lo, had done nearly as well.The son of an alligator hunter, Doug was the seventh of nine children. He was raised in a home where Cajun French was spoken and didn’t learn English until he was eight–the same year his father committed suicide. Starting with the fiddle at age five, he eventually taught himself to play 28 instruments. His first paying job was at a Cajun bar, the Bucket of Blood, where he was accompanied by his mother. He and brothers Rusty Kershaw and Peewee formed their first band, the Continental Playboys, in 1948.

Peewee Kershaw soon departed the band but Rusty and Doug continued recording in French for J.D. Miller’s Feature Records. Miller convinced them to switch to English and in 1955 they recorded So Lovely Baby which Miller leased to the Hickory label. The song was a Top Five country hit and the brothers soon became members of the Louisiana Hayride in Shreveport.A sketch still hangs on the wall of Miller’s recording studio that depicts Rusty and Doug Kershaw and members of their band during a recording session. Each member is clad only in underwear. Studio owner Mark Miller explained that the studio had no air conditioning and it was so hot and humid during the session that band members stripped down to their skivvies. Doug earned a degree in mathematics from McNeese College in Lake Charles and in 1958, both brothers enlisted in the Army. Reunited following their discharges in 1961, the two collaborated on Louisiana Man but by the time their first album, Rusty and Doug, was released in mid-1964, they decided to split up.

On June 21, 1975, Doug married wife Pam in the Houston Astrodome before an Astros game. Following the game, he performed a concert for the Astrodome crowd. He has five sons. One son, Tyler, is a drummer in his band. In 1988 he recorded Cajun Baby, a duet with Hank Williams, Jr. He currently runs Doug Kershaw’s Bayou House, a restaurant in Lucerne, Colorado where he continues to play regularly. 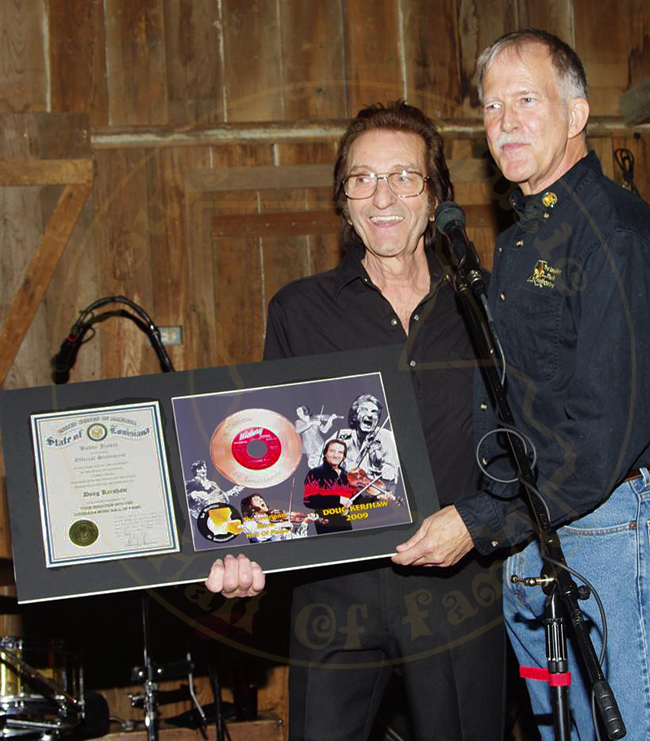