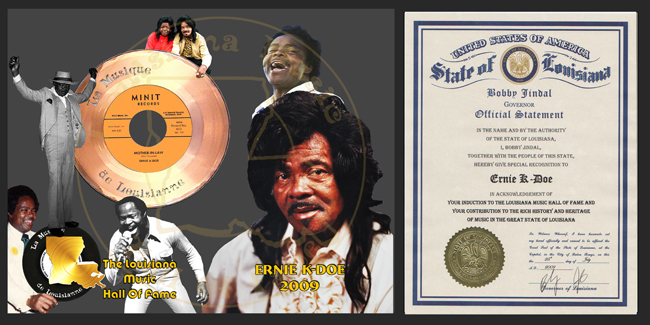 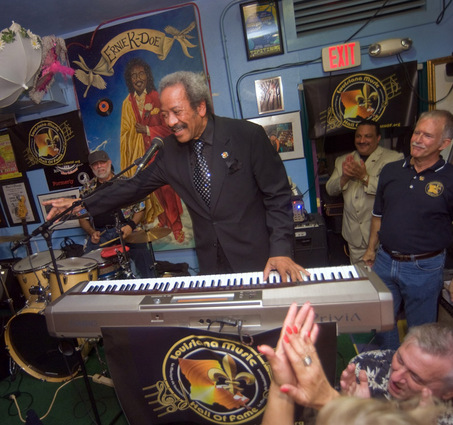 MATTHEW HINTON / THE TIMES-PICAYUNE
Allen Toussaint, author of “Mother-In-Law” and a recognized musical genius who has touched the careers of scores of artists over four decades, sings the song at K-Doe’s lounge in New Orleans Sunday August 2, 2009 when he was inducted into the Louisiana Music Hall of Fame along with a posthumous induction of K-Doe. 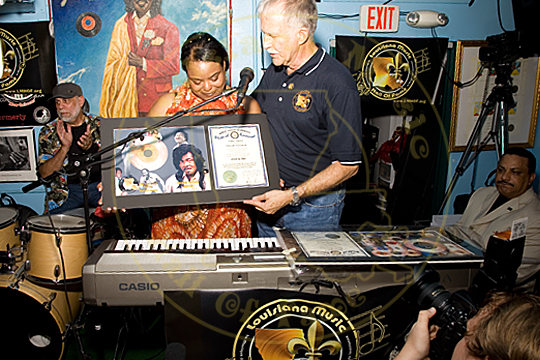 Ernest Kador, Jr. (Feb. 22, 1936–July 5, 2001) was once quoted as saying, “I’m not sure, but I’m almost positive that all music came from New Orleans.” Better known by his professional name Ernie K-Doe, he is best remembered for one song. Though he broke into the Top 100 four more times, Mother-In-Law, a number 1 hit, is the signature song that catapulted him to fame in 1961. K-Doe stumbled upon the novelty song in a studio trash can after its composer, Allen Toussaint, had thrown it away. It first entered the charts in May and remained there for fourteen weeks.

With Mother-In-Law jokes always popular, the song was a natural. Add to that Benny Spellman’s rich baritone repeating the title line backed by Allen Toussaint on piano, and the song had all the ingredients to make it a hit and was just what Joe Banashak needed to give his fledgling Minit Record label a much-needed hit.

An earlier effort, Hello My Lover, was a regional hit, selling almost 100,000 copies, but the song was released under the name Ernie Kador.

The next record was Mother-In-Law. The artist’s name was changed from Ernie Kador to Ernie K-Doe and earned the singer a gold record.

In May of 1961, he again broke into Billboard’s Hot 100 with Te-Ta-Te-Ta-Ta. It remained on the charts for five weeks, peaking at number 53. I Cried My Last Tear and A Certain Girl both put him back on the charts in December of 1961, reaching numbers 69 and 71, respectively. The former was on the charts for five weeks and the latter for four. His only other entry into Billboard’s Hot 100 was in February of 1962 when Popeye Joe appeared for one week at number 99. Tain’t It the Truth, which captured the unique magic and feel of New Orleans rhythm & blues, was relegated to regional status.

After that brief fling with national fame, K-Doe’s career floundered and he was unable to record another hit. Beginning in the 1970s, he sank into a decade of alcoholism that reached its depths when he was forced to sing on street corners for spare change. He resurfaced in 1982 as host of a local radio show. His unabashed self-aggrandizement enhanced his on-air antics gaining him a new generation of admirers. In 1994, he met his future wife, Antoinette Fox, who helped him turn his life around. He opened his own club on Claiborne Avenue, calling it appropriately, the Mother-In-Law Lounge. He performed there frequently, often accompanying his own songs on the jukebox. He was inducted into the New Orleans Music Hall of Fame in 1995, and in 1997 the Rhythm & Blues Foundation Pioneer Award was bestowed upon him in Manhattan. His career now resurrected, he proclaimed himself Emperor of the World.

He died from kidney and liver failure.