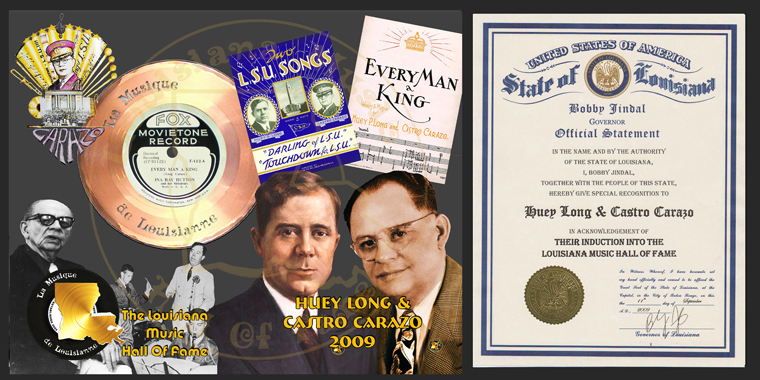 For Long, the success of the LSU band was inextricably linked to the success of the University. Long’s plan was to make LSU one of the country’s greatest universities and this included making the band “second to none.” In an LSU oral history “I’ve Got a University: Huey Long and LSU’s Golden Years,” Mary Hebert recalls “…improving the university became one of his pet projects. It was not LSU’s academic standing, however, that first attracted his attention-it was the band…The governor then demanded that the band be enlarged from twenty-eight to one hundred-twenty-five pieces…one of the largest in the country.” 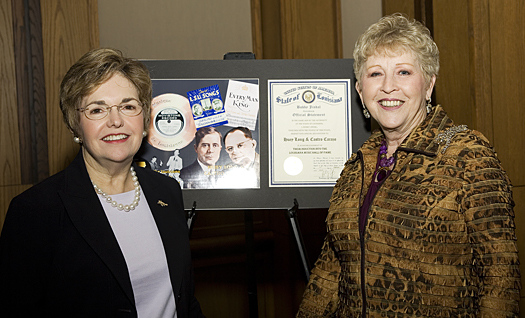 Kay Long and Nina Carazo Snapp with their grandfathers’ Award

However, Long felt he needed a new band director to advance his plans.  In 1934 Long attended a show at the famed Blue Room of the Roosevelt Hotel in New Orleans featuring jazz dance orchestra leader Castro Carazo and sent a bodyguard to bring the Costa-Rican born celebrity to his table. LSU Alumni Association President and Tiger Band alumnus Dr. Charlie Roberts recalls how Castro told him the encounter went. “Huey said ‘You are now the band leader at LSU, come with me, we’re returning to LSU.”

Long and Carazo co-wrote several of LSU’s songs, most notably “Touchdown for LSU,” (still a major component along with “Tiger Rag” in the LSU Tiger Marching Band’s famed pregame show in Tiger Stadium), “The LSU Cadets March” and “Darling of LSU.”   Carazo also told Roberts that his relationship with “the Kingfish” had a special chemistry. “Long would call up Carazo at all hours of the night, once saying ‘Get your pen and paper, I’ve got this new song.’ Huey then whistled “Touchdown for LSU” over the phone.”  The duo also wrote and published a song entitled “Miss Vandy: Dedicated to the Coeds of Vanderbilt University” Unfortunately, no one can recall or find any reference as to the song’s origin.  (The song was rediscovered and shared with Vanderbilt University’s Band Department in 2007 and the Commodore Band subsequently performed it as a tribute in one of its halftime shows.) Huey Long understood how music can inspire and drive an idea, and his anthemic “Every Man a King” was written with Carazo in 1934 when Long was Senator possibly as a presidential campaign song. It’s not hard to see that he provided a model for Jimmie Davis (himself an Louisiana Music Hall of Fame member) to convert his legendary “You Are My Sunshine” into a potent campaign tool over a decade later.

Long initiated a massive increase in the band’s membership to nearly 250 and saw to it that its traditional military dress was replaced with showier uniforms in the schools colors of purple and gold. As intent on showmanship as he was size, Long encouraged the football band to become more dazzling. Halftime shows soon won LSU the nickname “The Show Band of the South.” On several occasions Long, a former elected Louisiana railroad commissioner (later called public service commissioner) would successfully “negotiate” lower train ticket prices so that the band and students could travel with him to away football games.  Long would often lead the band through the streets during parades.

The only thing that kept Long and Carazo from generating more material was the untimely assassination of the former Governor in 1935. Despite the tragic event, the LSU Tiger Band continued to enjoy a period of innovation and fame under “Professor” (as he was fondly addressed by friends and band members) Carazo’s guidance, In 1937 “Fight for LSU,” LSU’s official fight song, was published by Carazo with lyrics by W.G. “Hickey” Higganbotham. However, within a few years many of the changes the “Kingfish” made to the Tiger Band and to the University were reversed as part of a backlash against his control over LSU. As a result, Carazo was fired and military uniforms were reinstated. It would only be after World War II that the Long/Carazo legacy of show bands would return, and when it did the LSU Tiger Marching Band fed upon this heritage of show band excellence to go on to even greater heights as an elite organization among college bands. 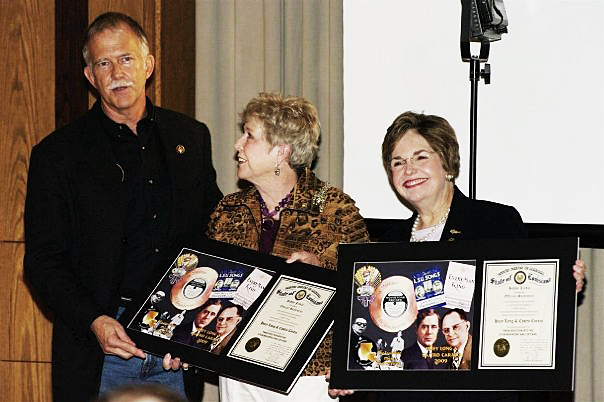 Carazo made a mark for himself as both a composer and band leader before and after the “Kingfish” and LSU Band years (1934-40). Carazo composed music in a wide array of styles: light classic, traditional march, jazz and Cuban/Latin dance.  He achieved success with the Latin-flavored “Bonita” with words by Sam Lewis, a prolific Broadway and popular music lyricist. He also wrote “National Guard March,” officially adopted by the U.S. National Guard; “R.O.T.C. Cadets March,” and in 1952 his song “Louisiana My Home Sweet Home” was adopted as Louisiana’s official state march song.

To learn and experience more, please visit the Huey P. Long & Castro Carazo albums  under “GALLERIES MUSIQUE” on this site.