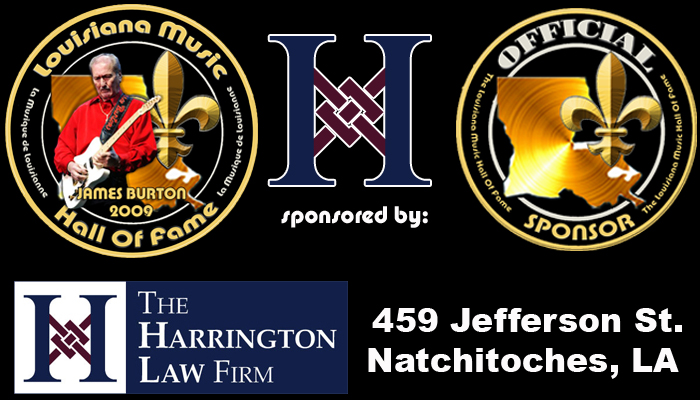 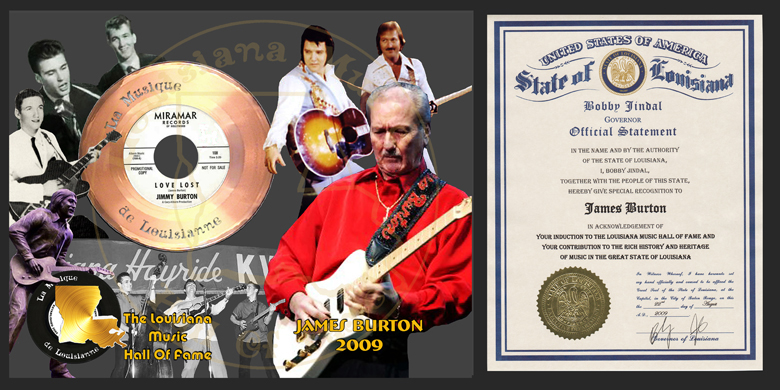 He got his first guitar at thirteen and within a year, James Burton (Aug. 21, 1939--) was a member of the Louisiana Hayride staff band. At fifteen, he joined Dale Hawkins in the KWKH studio in Shreveport to record Susie-Q. Besides Hawkins, he would record with Elvis Presley, Elvis Costello, Rick Nelson, Jerry Lee Lewis, John Denver, Merle Haggard, Emmylou Harris, Randy Newman, and Roy Orbison.

Burton was born in Minden and his family moved to nearby Shreveport when he was ten. He and Hawkins co-wrote Susie-Q in 1956, Burton writing the music and Hawkins penning the lyrics. Burton never got credit for his writing contributions. He remains philosophical about it, saying he was only fifteen and knew nothing about the music business. He said he was only doing something he really loved and enjoyed.

At the Hayride, he backed George Jones, Johnny Horton, and Bob Luman. Ricky Nelson overhead him as he played behind Luman at the Imperial Records studio and recruited him for his band. The two remained together from 1958 to 1965. Millions of viewers watching Ozzie & Harriet each week saw Burton playing behind Nelson in the closing musical performance of each show.

In 1965, the TV show Shindig debuted, featuring Burton as guitarist for the show’s house band, the Shindogs. During this time, Bob Dylan tried to lure him to work in his touring band, but the contract with Shindig prevented him from accepting the offer. In 1966, he released Corn Pickin’ and Slick Slidin’ with Buck Owens’s pedal steel guitar player Ralph Mooney. In 1968, Burton was asked to participate in the NBC 1968 Elvis Presley Comeback Special, but he was doing studio work on an album with Frank Sinatra and again, was unable to accept. He had seen Elvis perform at the Hayride but the two never met until Elvis decided to resume touring in 1969. Burton was the first person he called. Presley wanted Burton to play guitar and be his band leader. This time Burton accepted the offer to replace Scotty Moore. The two remained together until Presley’s death on August 16, 1977.

Burton remembered he was on board a plane that day en route to Portland, Maine, for Presley’s show scheduled for August 17. During the flight, they were asked to return to Las Vegas, he said. The plane landed in Pueblo, Colorado to refuel and trombonist Marty Harrell called Vegas to learn what was going on. Harrell came up to Burton and put his arm around him and said Elvis had died, Burton remembered, adding that cold chills went over him. He and the others attempted to come to grips with the finality of the news during the long flight back to Vegas. “It was an incredibly sad time,” he said.

While working with Elvis, Burton also performed with Gram Parsons and Emmylou Harris as part of their Hot Band during his downtime with Presley. He toured for several years with John Denver and was a member of Jerry Lee Lewis’ road band in the early ‘80s. In 1971, with Presley’s producer Felton Jarvis, he recorded his only solo album, The Guitar Sounds of James Burton. Other stars with whom he performed included Hoyt Axton, Judy Collins, Buffalo Springfield, the Everly Brothers, the Beach Boys, Sonny & Cher, Buck Owens, the Fifth Dimension, and Phil Spector’s roster of singers, among others. In 1988, he performed in the Cinemax special, Roy Orbison and Friends: A Black and White Night, playing a guitar duel with Bruce Springsteen.          Accolades for James Burton have come from a wide range of artists and critics. John Fogerty said Burton was one of his earliest influences. Emmylou Harris called him a poet, saying there is no one comparable to him. John Denver echoed Harris, saying Burton is the best guitar player there is. Chet Atkins called him “the greatest,” and Carl Perkins said one would be hard-pressed to meet a finer gentleman or a better guitar player than Burton. George Harrison called Beatles material feeble by comparison.

On March 19, 2001, Burton was inducted into the Rock & Roll Hall of Fame. Burton fan Keith Richards of The Rolling Stones presented his induction speech Today, James resides in Shreveport and heads the James Burton Rock N Roll Foundation which holds the James Burton International Guitar Festival annually in the Shreveport Municipal Auditorium (home of the Louisiana Hayride), which features two prominent ststues in front on Elvis Presley Ave, one of Elvis and one of James Burton.

Bio courtesy of Tom Aswell - author of "Louisiana Rocks - The True Genesis Of Rock And Roll". 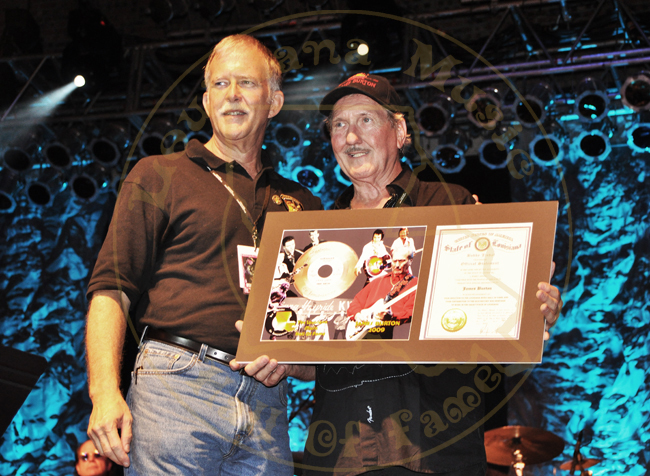