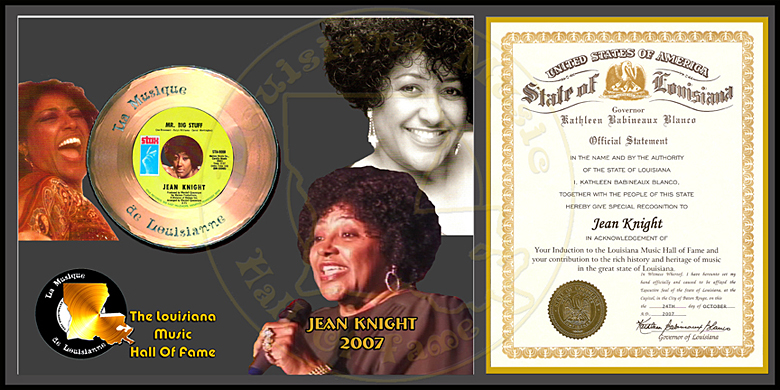 Jean Knight didn’t have her first hit until 1971 but it was such a huge hit that it would be impossible to overlook her when discussing Louisiana rock singers.  Born Jean Caliste in New Orleans on January 26, 1943, she got her big break when, at the urging of her first husband, she entered Cosimo Matassa’s J&M Studio to record a demo in 1965.  One of the songs she recorded was a cover of Jackie Wilson’s Stop Doggin’ Me Around.

Huey Meaux of Winnie, Texas was also in the studio to record a female singer, Barbara Lynn, whom he’d discovered in nearby Beaumont.  He was confident Barbara Lynn’s song You’ll Lose a Good Thing would be a winner – and it was – but Meaux had the presence of mind to take note of this other new singer from New Orleans.  He signed her to a recording contract and she recorded three singles for Meaux, including a cover of Ernie K-Doe’s Tain’t It the Truth, but nothing really clicked outside New Orleans.

With music now only a hobby, she worked full time baking bread in Loyola University’s cafeteria.  Then one day a stranger approached her to say he’d written some songs that producer Wardell Quezergue wanted her to sing.  She’d never heard of Quezergue but she was intrigued enough to allow him to transport her in a borrowed bus to his Malaco Studio in Jackson, Mississippi.  She’d heard a tape of Mr. Big Stuff and she liked it, but it was a ballad and she wanted to liven it up.  Joe Broussard, one of the co-writers of the song, told her to sing it the way she felt it.  In the Malaco studios, she nailed the song on her second take.

Knight went back to baking bread while Quezergue tried to find a label interested in picking up her record and Groove Me, a song that King Floyd had recorded the same day.  His first choice was Stax Records in Memphis, but they weren’t interested so in desperation Quezergue started his own label, Chimneyville, and released Groove Me which became an instant hit in New Orleans.  That got the attention of Stax executives and the company picked up Knight’s Mr. Big Stuff.  The record was an overnight sensation in the Washington and New York markets and the song quickly climbed to number one on the R&B charts and to number two on the Billboard Hot 100, remaining on both charts for sixteen weeks. As personal appearances piled up for Knight, Mr. Big Stuff went on to sell more than three million copies, earning her both gold and platinum records.  At the Grammy awards in New York, the song was runner-up to Aretha Franklin’s Bridge over Troubled Waters for Song of the Year and Knight was named Most Promising New Female Artist. Knight was getting $5000 a night and was so busy she didn’t have time to buy a car but she was never home long enough to drive one anyway.  Stax suggested some songs for her to record but Quezergue tossed them, insisting that she record songs his production company came up with.  The dispute between Quezergue and Stax accelerated the end of her association with the record company by 1973, not that it mattered to her future finances.  “Mr. Big Stuff is better to me now than thirty-one years ago,” she said in a 2002 interview.  “All I have to do is sit at home and wait for the mailman.”

In 1981, she charted again (number 57) with You Think You’re Hot Stuff that sold 900,000 copies, and in 1985, her cover of Rockin’ Sidney’s My Toot Toot sold 850,000 singles.  In all, there were three versions of My Toot Toot that charted simultaneously, including Knight’s, which was an even bigger hit than that of Rockin’ Sidney.

On October 27, 2007 at the LMHOF “Louisiana’s Greatest Hits – LIVE! – Volume 1” concert in Baton Rouge, Louisiana, Jean Knight was inducted into The Louisiana Music Hall Of Fame. 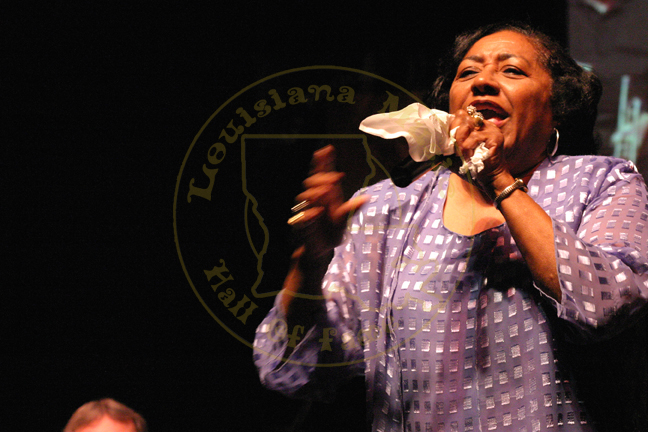 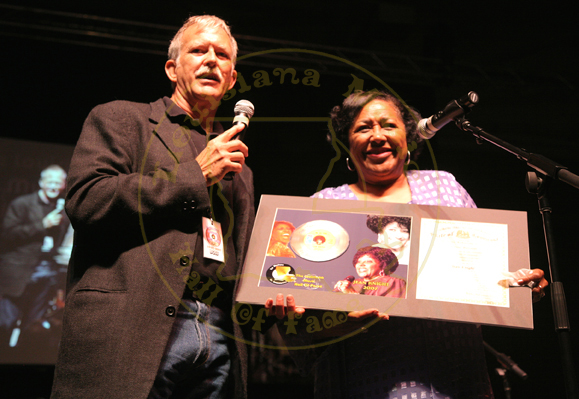