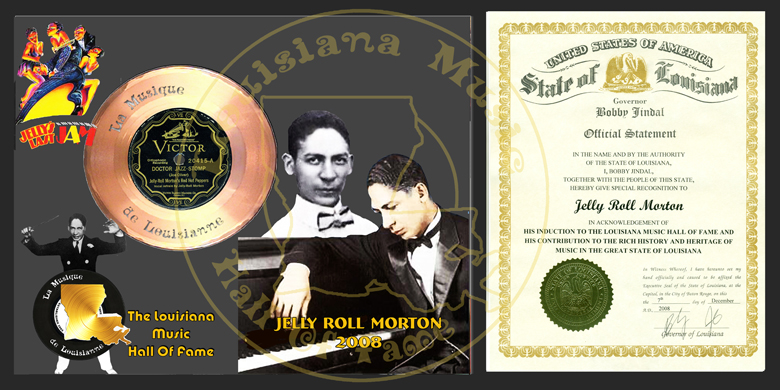 Jelly Roll Morton grew up in New Orleans and began learning piano at age ten, graduating two years later to working in the whorehouses of Storyville as a piano player. From 1904 to 1917, he roamed the South as an itinerant pianist, working clubs in Louisiana, Mississippi, Alabama, and Florida.

Maintaining New Orleans as his base, he traveled to St. Louis and Kansas City, eventually making his way to the West Coast and then to Chicago. In Chicago, he established himself as a talent to be reckoned with and made several classic recordings for RCA Victor with some of the best New Orleans sidemen available, including Kid Ory and Johnny St. Cyr. He even made the repeated boast that he invented jazz.

By the 1930s, Jelly Roll had fallen on hard times, so hard that he somehow lost the diamond from his front tooth. He played dives in Washington, D.C., eventually managing a jazz club where he played occasionally. In 1938, folklorist Alan Lomax documented his life in a series of interviews about early jazz for the Library of Congress. Morton blamed his encroaching ill health on a voodoo spell. He died in 1941.

In 2008, Jelly Roll Morton was posthumously inducted into The Louisiana Music Hall Of Fame.

*Bio courtesy of Tom Aswell – author of “Louisiana Rocks – The True Genesis Of Rock And Roll”.