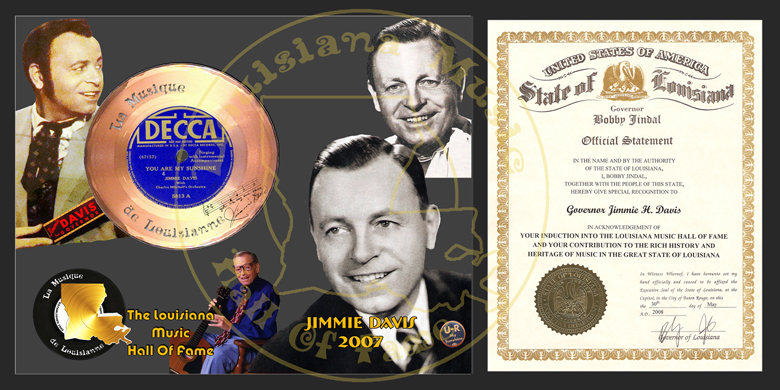 A son of sharecropping parents, Jimmie Davis was a hugely successful singer and twice served as governor of Louisiana, both times defeating a ticket that included powerful Earl K. Long.

His most famous song, 1939’s You Are My Sunshine, was covered by dozens of artists, including Bing Crosby, Aretha Franklin, Gene Autry, Johnny & the Hurricanes, Mitch Ryder, and Ray Charles.  It was named the official state song of Louisiana in 1977, won a Grammy Hall of Fame Award in 1999, and that same year was named one of the Songs of the Century by the Recording Industry Association of America.

He worked as a street musician to pay his way through Baptist-affiliated Louisiana College in Pineville and LSU in Baton Rouge.  Upon obtaining his Master’s Degree in education from LSU, he landed a teaching job at Dodd College for Women in Shreveport and earned extra money singing on a local radio station.

Early on, he had a penchant for risqué songs and like Mississippi blue yodeler Jimmie Rodgers, he made frequent use of double entendres in his song lyrics. When a talent scout heard him on the radio, he landed a recording contract and had his first major hit with Nobody’s Darling but Mine, also covered by several others.  He followed that with It Makes No Difference Now.

A political novice, he won his first race when he was elected Shreveport’s commissioner of public safety before winning a seat on the Louisiana Public Service Commission.  In 1943, he was elected governor when he defeated a ticket that included former Governor Earl Long as a candidate for lieutenant governor.  Even then, his singing career continued with his number 1 hit There’s a New Moon over My Shoulder.  He traveled to Hollywood to make a handful of B-westerns, playing himself in the 1947 movie Louisiana based loosely on his life.  In 1959, Davis won his second term as governor, again defeating, among others, a ticket that included outgoing Governor Earl Long who again ran for lieutenant governor. He had by that time begun to record gospel music almost exclusively, achieving another huge hit with Suppertime.

He didn’t spend all his time in office singing, however.  In his first term, he established a state retirement system and funding for more than $100 million in public improvements while leaving the state with a $38 million surplus.  During his second administration, he built the Sunshine Bridge over the Mississippi River, the Toledo Bend Reservoir, and the new Governor’s Mansion, all criticized at the time but later acknowledged as beneficial to the state.  He also coordinated pay periods of state employees who sometimes received paychecks a week late.