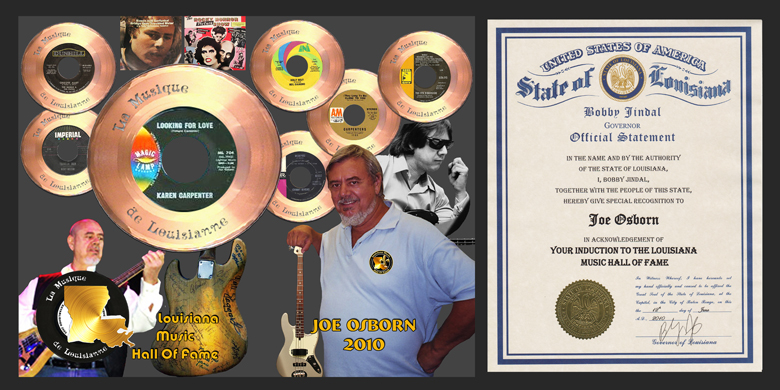 The Bass lines of Joe Osborn (Aug. 28, 1937–) are heard on half the hit songs recorded in Los Angeles. He played on more than 400 Top 40 country hits and over 200 Top 40 pop hits, twenty of which were number 1 songs. He played bass for Dale Hawkins on his recording of Susie-Q in 1957. He was the first to record Karen Carpenter, doing so in the Garage Studio,  his four-track recording studio in his home, and releasing Karen’s first single on his Magic Lamp label.

Osborn was born in the Madison Parish town of Mound, Louisiana, across the Mississippi River from Vicksburg. He grew up in Shreveport and at age twelve, learned to play guitar by listening to the radio. He started out working area clubs before teaming with Hawkins. He headed to Los Angeles and, finding himself without work, contacted Shreveport native Bob Luman, who hired him for a year-long gig at the Las Vegas Showboat Hotel in 1959. He returned to Shreveport briefly in 1960 but soon returned to Los Angeles. For the next four years he played bass on Rick Nelson’s recordings and was a regular guest, along with James Burton, on The Ozzie and Harriet Show.

Osborn soon was in demand as a recording session sideman. Among those soliciting his services were producers Bones Howe and Lou Adler, songwriters Jimmy Webb, Steve Barry, and P.F. Sloane, and singers Tommy Boyce and Bobby Hart. While making a demo for Adler’s Dunhill Records in 1963, he played with drummer Hal Blaine and keyboardist Larry Knechtel. It was the first time to play together for the three who later became known as the Wrecking Crew, which for the next decade was the top rhythm section on the West Coast. The trio played on recordings by Glen Campbell, the Beach Boys, the Monkees, the 5th Dimension, the Partridge Family, the Mamas and the Papas, the Carpenters, the Association, 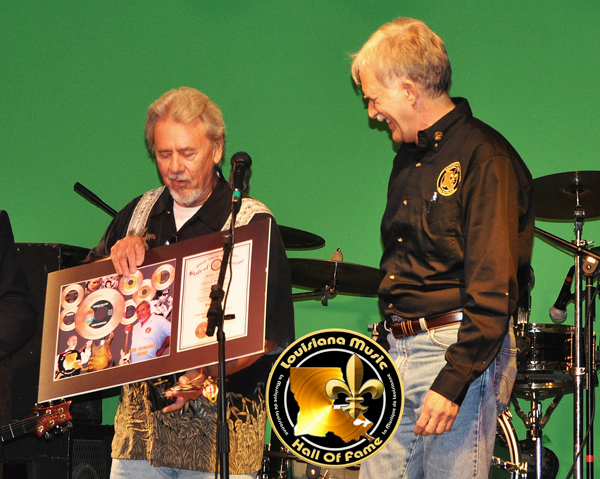 Gary Lewis & the Playboys, America, Spanky & Our Gang, and the Grass Roots.

Baton Rouge native Johnny Rivers, by then living in Los Angeles, recruited Osborne to play bass on his albums and to help open the Whiskey-A-Go-Go in 1964. Osborne traveled to New York to play on recordings by Simon & Garfunkel, Bobby Sherman, Richard Harris, and Barry McGuire. He also performed on numerous movie soundtracks and TV commercials.

Attempting to cut back on his workload, he demanded double and triple scale. The tactic backfired when demand for his services increased to as many as twenty sessions per week. To force a cutback in his work schedule, he moved to a Nashville farm. There he experienced a slower pace of occasional jingles and sessions with Chet Atkins, Eddie Rabbitt, Merle Haggard, Reba McEntire, Kenny Rogers, and Jimmy Buffett.

In 1988, he moved back to a Shreveport suburb where he continued to record original songs on his four-track recorder and occasionally plays with the Third Generation, a family band with his children and grandchildren. He still flies to Dallas, Los Angeles and Nashville for occasional recording dates. But after four decades of non-stop picking, he has finally succeeded in reducing his work schedule.