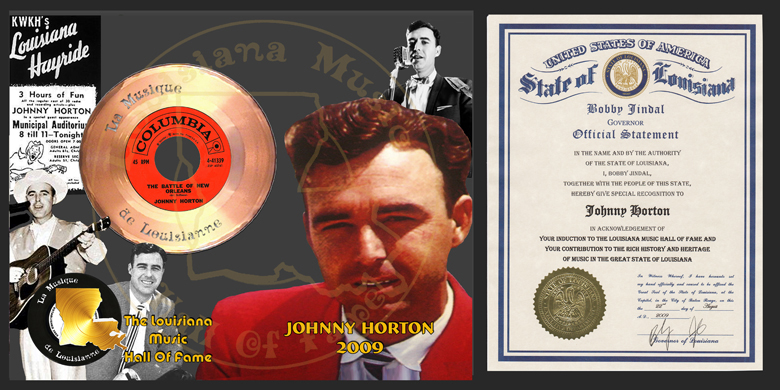 It was a circuitous odyssey that carried Johnny Horton from Los Angeles, to the fishing waters of Alaska, to Shreveport, and eventually, to the number one song for six weeks in 1959.  Then, at the peak of his career and in the time it took a Texas A&M student to wander over the center line, Horton’s life was snuffed out.

Born John Gale Horton in Los Angeles on April 30, 1925, he spent most of his formative years bouncing back and forth between California and East Texas with his sharecropping parents, eventually calling Tyler, Texas home.  After graduating from high school in 1944, he attended Methodist seminary to pursue the ministry.  He soon left school and started traveling the U.S., eventually moving to Alaska in 1949 where he worked as a fisherman and wrote songs in his spare time.  It was back to East Texas in 1950, where he entered and won a talent contest hosted by Jim Reeves who had yet to achieve stardom in his own right.  During 1951, he performed on several Los Angeles TV shows and hosted a radio show in Pasadena.  By the end of the year, he relocated to Shreveport where he became a regular on the Louisiana Hayride but quickly encountered two major disappointments.  First, his wife left him and in short order, his manager severed ties with him to take over management of Jim Reeves.

Hank Williams rejoined the Louisiana Hayride in 1952 and took Horton under his wing.  After Williams died on New Year’s Day of 1953, Horton began a relationship with Williams’ widow, Billie Jean Jones Eshliman Williams, and they were married on September 26 of that year.  Horton’s career, however was stalled and by November 1954, he was out of the music business, albeit temporarily.  Only a month before, Elvis Presley had made his historic debut on the Hayride and the seeds of rockabilly were sown.  Billie Jean received a settlement from Williams’s estate, but she and Horton had gone through the money and Horton was broke.  Tillman Franks, five years older than Horton, had played bass for Webb Pierce, the Carlisles, Billy Walker, Jimmy C. Newman, and the duet of Jimmy & Johnny before he was fired as a Hayride announcer.  He, too, was out of work when Horton came to him.  “Billie told him to get his ass out of the house and find a job,” Franks said.  “I told him I just didn’t like the way he sang.  He said, ‘No problem.  I’ll sing any way you want me to.’  He was serious,” Franks said.  “Billie told him if he could get me to manage him, he would go to number one, so I decided to give it a try.”

Horton already had a history of bad to mediocre songs he’d recorded and his career was going nowhere until, under Franks’ guidance, he morphed his vocal stylings from country to honky tonk and left Mercury Records to sign with Columbia.  His first record in 1956, Honky Tonk Man, was a hit and was covered by Dwight Yoakam half-a-century later.  The song didn’t come easy, though.  Franks and Horton had to borrow Shreveport singer David Houston’s father’s car to drive to Nashville.  En route, they stopped at Elvis Presley’s Memphis home to borrow ten dollars gas money and to complete Horton’s band by recruiting Presley’s bass player Bill Black.  He followed Honky Tonk Man with One Woman Man and his first number one song, Springtime in Alaska.  In June of 1959, he became a household name with Jimmy Driftwood’s Battle of New Orleans, a song that skyrocketed to number one on both the country and pop charts in June, remaining atop the charts for six weeks.  Altogether, it stayed on the charts for 21 weeks and sold nearly three million copies and was the top song for 1959. The only downside to the song’s and Horton’s success was his appearance on the Ed Sullivan Show.  Both he and his band appeared in ridiculous coonskin caps, looking out of place and ill-at-ease as he lip-synced the lyrics.  Fast on the heels of Battle of New Orleans was Johnny Reb, a song saluting the Confederacy, which hit number 54 in September 1959.

Horton was hot and could do no wrong, except in the eyes of the powers that be in Nashville.  One of the few country stars to steadfastly refuse to appear on the Grand Ole Opry, he became a pariah by the country music elite.  His marriage to Hank Williams’ widow only nine months after Hank’s death did nothing to soothe feelings among country’s elite.  Even the Encyclopedia of Folk, Country & Western Music contains not a mention of Johnny Horton among its more than six hundred entries.

In April of 1960 he recorded Sink the Bismark (inspired by the movie of the same name, according to album liner notes), which reached number three on Billboard’s Hot 100.  Johnny Freedom reached number 69 in July 1960 and in December 1960, North to Alaska reached number four, earning him his third gold record.  Sadly, he never lived to see it.  Nor did he ever see the John Wayne movie of the same name that featured the song in the opening credits.  A month earlier, on November 5, Horton, Franks, and guitarist Tommy Tomlinson were en route back to Shreveport from a performance at the Skyline Club in Austin, Texas.  It was 1:30 a.m. and as Horton approached the crest of a railroad overpass near Milano, Texas, an oncoming car crossed over the center line, crashing into Horton’s vehicle.

Franks and Tomlinson were seriously injured, but survived.  Franks woke up a split second before the impact to see Horton fighting the wheel.  “Then I saw the pickup truck coming in on us,” he said.  Franks was knocked unconscious by the crash and when he awoke, he was lying against Horton.  He asked Tomlinson, who was moaning in the back seat, what happened and Tomlinson responded that they’d been in a bad wreck and “Johnny’s in a real bad way.”  Franks then lapsed again into unconsciousness.  Horton was pronounced dead at St. Francis Hospital in Cameron, Texas at 1:45 a.m.

In an eerie plot twist that mirrors a story line from a Hollywood B-movie, Horton not only was married to Hank Williams’ widow at the time of the accident, but each singer’s final performance was at Austin’s Skyline Club.