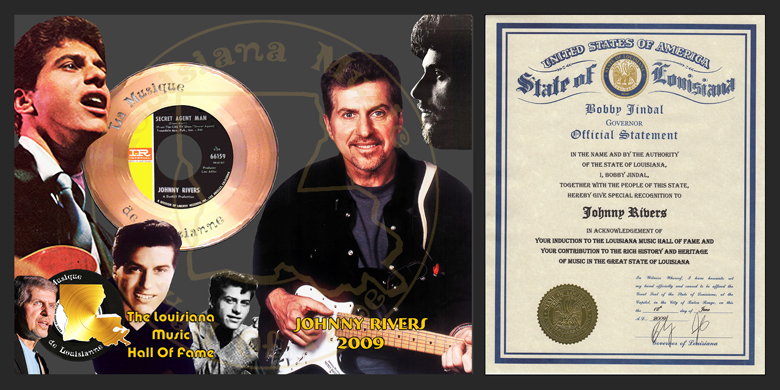 A popular trivia question on oldies radio programs is, “Who is Johnny Ramistella?”  If you happen to be from Baton Rouge, the question is a no-brainer.  If you live elsewhere, it’s a little trickier: Johnny Rivers was born John Henry Ramistella in New York City.  When his father lost his job, the family moved to Baton Rouge where an uncle worked as head of the LSU art department.  He got the elder Ramistella a job painting houses and antiquing furniture.  Getting his first guitar at age eight, Johnny’s career is, for the most part, a story of great timing beginning with his boyhood attraction to rhythm & blues music indigenous to South Louisiana.  When performers like Fats Domino, Jimmy Reed, and Irma Thomas played at his school dances at Baton Rouge Junior High, it only served to arouse an even more intense drive to make his own music.  It wasn’t long before he graduated from sessions with his dad and uncle and started sitting in with local bands.  One of those was a band called The Rockets, led by Dick Holler who later wrote Abraham, Martin, And John and Snoopy Vs. The Red Baron, among others.  Lead guitarist for The Rockets was a still-unknown teenager named Jimmy Clanton. 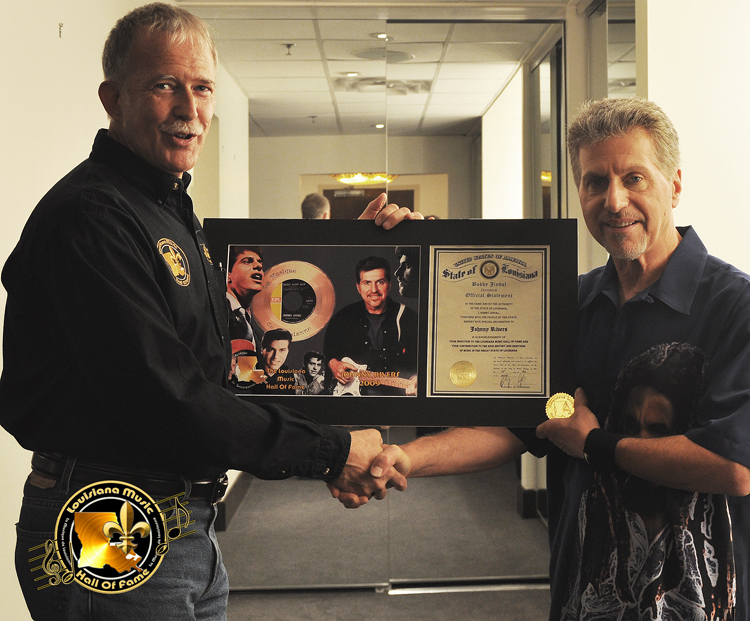 Rivers entered talent shows at the old Paramount Theater in downtown Baton Rouge, winning seven straight times before he was asked not to return so that others would have a chance.  While shut out of the amateur contests, he now had the confidence needed to approach local bands to ask to sit in with them.  Rivers flouted the traditions of the segregationist South by befriending black musicians Slim Harpo, James “Sugarboy” Crawford, and Art Neville.  Even today, he thinks music had a way of overcoming the separatist mindset.  “Music made for a different community,” he said.

Inevitably, he started his own band, The Spades, while still in junior high and he cut his first record at age fourteen.  A year later, in 1957, he returned to New York for a visit.  Determined to meet America’s most famous deejay, he went to Columbus Circle and stationed himself outside the WINS studio in the freezing rain in a scene Rivers later said was like something from an Alan Freed movie.  When Freed returned from lunch with his manager, Jack Hooke, Rivers drew on all the courage a fifteen-year-old kid could muster.  “My name’s Johnny Ramistella,” he said.  “I’m from Baton Rouge, Louisiana, and I have a band.  I play and write and I’d like you to hear my music.”  Incredibly, Freed handed him his business card and told him he had an office in the Brill Building on Broadway.  “Why don’t you come down tomorrow afternoon?” he said.  He did go, of course, and played several songs for Freed and Hooke.  Hooke called George Goldner, owner of the Gone and End record labels, to set up a recording session.  Songwriter Otis Blackwell, who wrote Don’t Be Cruel for Elvis and Great Balls of Fire for Jerry Lee Lewis, arranged Johnny’s debut single Baby Come Back b/w Long, Long Walk.  The record didn’t sell, but it is significant in that as it was being prepared for release, Freed suddenly turned to the youngster.  “Your name,” he said.  “You need to come up with something a little more musical than Ramistella.”

“We were discussing it,” Rivers said, “and I said something about how I grew up in Baton Rouge on the Mississippi River and somehow Rivers came out of that.  It was the first time I used that name.” 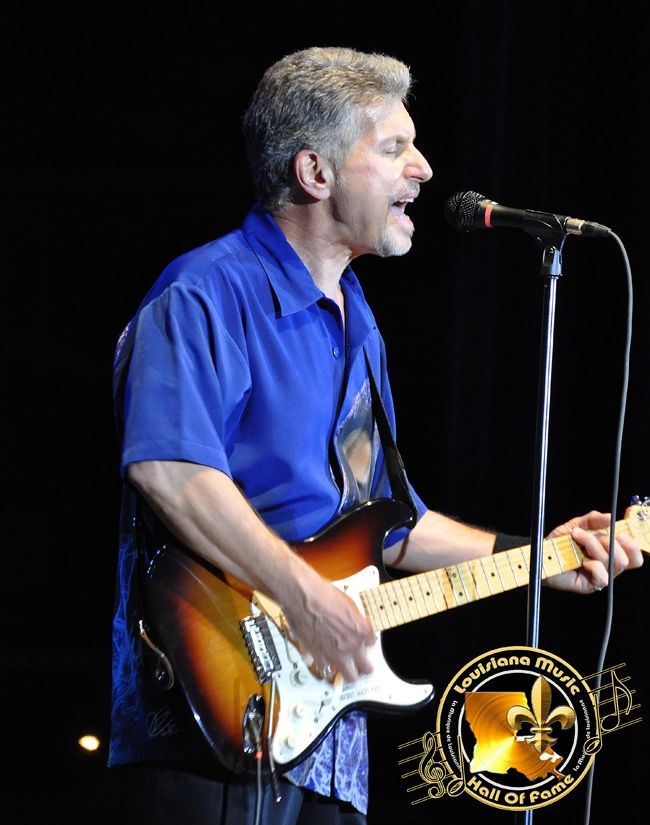 The new singer with the new name returned to Baton Rouge where he got another career break.  He began touring as a solo act with Southern comedian Brother Dave Gardner, one of the hottest comics in America in the early ‘60s and who pioneered the concept of comedy record albums for RCA.  At a show in Birmingham in 1959, Rivers met Audrey Williams, widow of singer Hank Williams.  Audrey brought Rivers to Nashville and secured a contract for him with Cub Records, a subsidiary of MGM.  He cut two records with the studio backing of several of Nashville’s best session artists, including Floyd Cramer, a native of Shreveport and former house piano player for the Louisiana Hayride.  Rivers formed a close friendship with the late Roger Miller, then an upcoming songwriter who owned his own publishing company.

His New York and Nashville experiences honed his instincts for selecting good songs and writers for his own recording career.  Learning that “the song was everything” from those venues, he continued to grow as an artist.  In New York, writers like Otis Blackwell would bring him a new tune and ask him to record a demo with an Elvis Presley sound.  At twenty-five dollars per demo, Rivers made a comfortable living in both cities and around 1960, he got a spot on the Louisiana Hayride through the efforts of KWKH deejay Merle Kilgore.

The Hayride appearance led to yet another break with an introduction to former Hayride house guitarist James Burton, a Shreveport native then playing for Ricky Nelson’s band in California, but home on vacation at the time.  Burton took a tape of Johnny’s song I’ll Make Believe to California and a few weeks later he called to tell Rivers that Nelson would record it for inclusion on his Imperial LP More Songs by Ricky.

Much had happened in a relatively short span of four years, but Rivers still did not have a hit record.  All his contacts, all his writing, and all the records he had recorded in Baton Rouge, New York, and Nashville had failed to chart.  He moved to California in 1961, met Ricky Nelson, and recorded Long Black Veil for Capitol Records which, like the others, was a commercial flop.  Again, though, he landed on his feet when he obtained work as a writer and producer.  Everything changed two years later.

Following late night hours at the recording studio in his capacity as a producer and musician, he often stopped at a little Italian restaurant-bar that stayed open late and which featured a jazz trio.  One night the band didn’t show and the restaurant’s owner, Bill Gazzari, asked him to fill in until he could find another jazz band.  With only drummer Eddie Rubin and no act, Rivers settled in for what he anticipated would be a three- or four-day gig.  Instead, in one of those freak events that defies explanation, word spread and the house was packed every night with throngs of people who came to hear Rivers and Rubin play rock and R&B at the heretofore jazz venue.  When Rivers was ready to leave, Gazzari, with one eye on his suddenly inflated profits, offered him more money and even hired a bassist, studio icon Joe Osborne, a native of Shreveport.

Again, Rivers would have the good fortune to meet someone – actually two someones – who would have significant impacts on his career as a performer.  The first was Lou Adler, who became his producer.  The other was Elmer Valentine, who was preparing to open the Whiskey A Go-Go Club on the Sunset Strip.  Valentine offered Rivers a year’s contract to perform at the new club.  He opened at the club on January 15, 1964.  Three days later The Beatles’ I Want to Hold Your Hand hit the Billboard charts.   The song, The Beatles’ all-time number-2 hit behind Hey Jude, remained on the charts for fifteen weeks, seven as the number-1 song in the country.  In quick succession, The Beatles followed with She Loves You, Can’t Buy Me Love, Love Me Do, A Hard Day’s Night, and I Feel Fine, all number-1 songs in 1964, as well as Twist and Shout, Please Please Me, P.S. I Love You, Matchbox, Ain’t She Sweet, I Saw Her Standing There, Slow Down (a cover of the Larry Williams hit), I’ll Cry Instead, And I Love Her, and several other lesser hits that same year.  The hemorrhage of British groups that followed in the Beatles’ wake represented an ominous portent of things to come.  One American artist after another faded into rock & roll purgatory, victims of Her Majesty’s transatlantic onslaught.  Among the few Yanks who survived the British Invasion, were two from Baton Rouge, Louisiana: John Fred and Johnny Rivers.

Rivers brought his Gazzari’s following with him to the Whiskey A Go-Go and the new club was a smashing success from the first night.  Rivers and his familiar red Gibson ES-335 guitar were at the club only a short time before Adler came up with the idea for a live album but after recording over two nights, they couldn’t find a record company in all of Los Angeles who wanted any part of the project until Liberty Records President Al Bennett released it on Imperial, which Bennett had purchased from founder Lew Chudd.  Rivers was excited at the prospect of recording for the label that made stars of Ricky Nelson and Fats Domino.  That he and Adler were given complete autonomy in selecting which songs he would record only made the deal sweeter.

Rivers played harmonica on Maybeline, but wasn’t happy with the results.  “I still cringe when I listen to it because I played it out of tune,” he said.  “I never liked my recording of that song.”  Of his cover of Mose Allison’s Seventh Son, he acknowledged he had been a fan of the blues singer for years after hearing Allison sing the song in a Gulfport, Mississippi jazz club.  For Poor Side of Town, Imperial tried to discourage him from changing directions in his music but he insisted on cutting the song.

He nearly pulled off another big hit but circumstances and corporate decisions have a way of intervening in the music business, usually in a negative way.  Rivers heard a song on an obscure album he liked.  He’d never heard of James Taylor but liked Fire and Rain and decided to record it.  It did so well at first that Warner Brothers, seeing that Rivers’ record was making a move, decided to release Taylor’s version as a single.  Warner Brothers promoted Taylor and his song and radio stations that were playing Rivers suddenly switched and started playing Taylor’s release, which climbed to number 3 in the country.

In all, Rivers received two Grammy Awards (for Best Contemporary Single and for Record of the Year, both as producer of the 5th Dimension’s Up, Up, and Away, in 1967), had nine Top 10 hits, seventeen that made Billboard’s Top 40, and coincidentally, seventeen gold records.  He recorded go-go style records, folk, blues, rock oldies, and slow moving ballads, selling more than thirty million records in the process.  In 2000, he teamed with Tom Petty, Paul McCartney, and Eric Clapton to record a tribute album dedicated to Buddy Holly’s band The Crickets.  He is encouraged at what he sees as a trend toward a renewal of what he calls a genuine sound as opposed to “the techno-pop stuff.”  Rivers eschewed studio overdubbing, choosing to do his vocals live and to play guitar with the band instead of laying down the vocal and guitar and other instrumental tracks separately.

To top off an already rewarding career, he also founded his own record company, Soul City Records and was recognized for giving songwriter Jimmy Webb his first break when the 5th Dimension recorded his composition Up, Up, And Away.

Other honors for Rivers include:

On June 12, 2009, at The Hard Rock – Live, Biloxi, MS, Johnny Rivers was inducted into The Louisiana Music Hall Of Fame.

Be sure to visit Johnny Rivers’ web site at www.johnnyrivers.com .