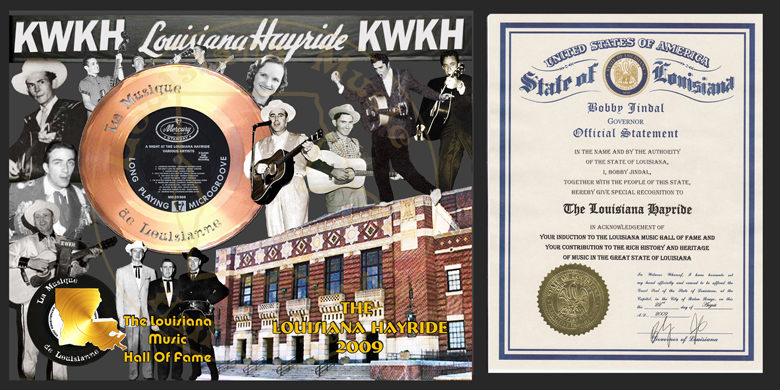 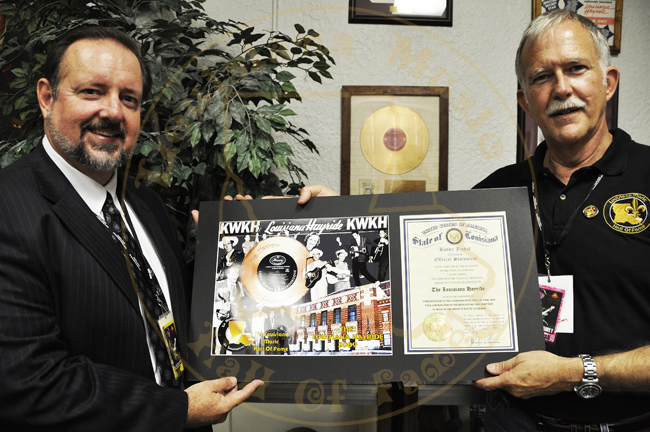 Gaggles of singers and pickers responded to the siren song that was the Louisiana Hayride. Collectively, they transformed the venue into a rockabilly Mecca. Two singers in particular–a frail, nasal balladeer from Alabama and a self-conscious teenager from Memphis who billed himself as the Hillbilly Cat–did more to validate the show as a major player in the live entertainment field than any other artists. But while the impact of Hank Williams and Elvis Presley remains indisputable, there were other contributors.

As the ‘50s moved into the ‘60s and television began to assert itself as the center of family activity, stars like Jack Benny and Bob Hope moved from radio to television. The popular radio show Gunsmoke followed suit, forcing radio to move away from live programming in favor of pre-recorded music. The Louisiana Hayride no longer was as important to aspiring stars as it once was. Television was now the vehicle that gave them their national exposure as evidenced by the appearances of Elvis and The Beatles on the Ed Sullivan Show and Jerry Lee Lewis on the Steve Allen Show. American Bandstand and Shindig also accelerated the exodus to the new medium. By mid-1960, the Hayride was surviving on past momentum and reputation. By the ‘70s, it virtually ceased to exist, its glory relegated to a bygone era.

Dave Kent approached KWKH in 1975 to purchase the Hayride name. He was informed that the name was never copyrighted and since the station had no intentions of ever using the name again, he was welcome to it. KWKH management never had the foresight to copyright the name, but even more unbelievable were the slipshod methods employed in preserving the history of this important show. About the same time that Kent was reviving the original Louisiana Hayride, KWKH was preparing to move from its longtime Texas Street home in downtown Shreveport to a new location on I-20. Movers were boxing up some things and throwing away others. Station management asked Kent if he wanted an old box of reel-to-reel tapes of shows that they had. Son Joey Kent was sent to pick up the tapes and while he was there, he was asked if he had time to help move a desk. When the desk was moved, a tape reel wedged between it and the wall fell and started unwinding across the floor. Joey Kent stopped it with his foot and noticed it had Elvis’s name on it. When he and his father listened to it and it turned out to be a recording of Elvis’ Hayride debut.

Station engineers occasionally recorded segments to document that sponsors were getting the promotions they paid for. Kent has a tape of Johnny Cash doing a live Southern Maid doughnut commercial from the Hayride stage. Elvis made only one product endorsement his entire career, a live Hayride ad for Southern Maid on November 6, 1954:

You can get ‘em piping hot.

Typically, the engineer on duty picked a tape at random and placed it on the recorder and turned it on. The engineer then would go about his business and allow the tape to run through that segment of the program in order to catch the commercial. That’s how the majority of about six hundred songs owned by Kent were captured. The station was recording the show for a sponsor on Presley’s Hayride debut, so a station engineer turned on the tape about ten minutes before Elvis came out on stage. The tape ran out about twenty minutes after he was finished.

Dale Hawkins recorded Susie-Q in the KWKH studios after the station went off the air. In fact, many of the Hayride stars recorded some of their biggest hits that same way. While the Hayride ended around 11:30 or midnight, the station would sign off the air at 1:00 a.m. and wouldn’t go back on until 5:00 on Sunday morning, leaving four hours that the studio was not in use. Hank Williams, Slim Whitman, Jim Reeves, and others would adjourn to the station’s studios to cut tapes of new songs. Kent said there was some documentation of recording sessions held by Jim Reeves in the studios but that the station inexplicably discarded them during its move. The only reason many Hank Williams recordings survived was because Williams had a regular morning show on KWKH and often recorded shows in advance in order to go on the road to perform without disrupting his show. When Williams died on New Year’s Day, 1953, a station deejay named Ray Bartlett retrieved the tapes and sold them to Leonard Chess of Chess Records. Chess in turn, sold them to Hank’s record label, MGM. Bartlett, for his part, was fired.

After World War II, he was offered the job of program director at KWKH. Station management wanted to revamp an old program called Saturday Night Roundup. He was given the assignment to put together The Louisiana Hayride and was in charge of booking the show’s talent. He was the Hayride’s producer from 1948 to 1958. The first breakthrough for the Louisiana Hayride that would place it on an even footing with the older and more established Grand Ole Opry came when Hank Williams became a regular on the show in August of 1948. Six years later, Logan and talent manager Tillman Franks became aware of a young singer from Memphis. They decided to give him a chance to perform on the Hayride. On October 9 or 16, 1954 (there are conflicting dates given by those who were there), Elvis Presley was introduced to his first national radio audience on the show. Presley was quickly signed to a contract to appear weekly on the Hayride and to tour with other regular Hayride performers.

When Logan retired in 1958, Tillman Franks became the Hayride producer for the next two years. Franks also taught guitar to Jerry Kennedy, Tommy Sands, and Merle Kilgore. It was in his capacity as manager of singers, however, that he built his reputation, working with Slim Whitman, Webb Pierce, Johnny Horton, Claude King, Jimmy C. Newman, David Houston, and even Terry Bradshaw. Franks said it was he who secured a recording contract for Bradshaw with Mercury Records. He also wrote several of Horton’s songs.

When Hank Williams first appeared in Shreveport, he didn’t have a suit so Franks gave him the familiar white suit he wore during his performances. The white suit was the same one Williams was wearing for a picture that was later used on a commemorative U.S. postage stamp. He also helped get Williams booked onto several shows in northwest Louisiana and east Texas.

Logan died in Victoria, Texas in 2002. Franks died in Shreveport four years later. Their deaths marked the end of an era during which some of the hottest talent in rockabilly music blazed a trail across the stage of the Louisiana Hayride, an era of artistic achievement that most surely will never be duplicated.

The Louisiana Hayride is currently owned by Alton and Margaret (Lewis) Warwick of Shreveport. Maggie Warwick is also the current (2009) Chairperson of the Louisiana Music Commission. The couple were formerly involved with the preservation of the Hayride’s home, Shreveport’s Municipal Auditorium, and have plans to revive the Hayride and establish a new physical location in Shreveport/Bossier City, LA.

*More info on the current “Louisiana Hayride” “Cradle of the Stars” can be found at www.louisianahayride.com.