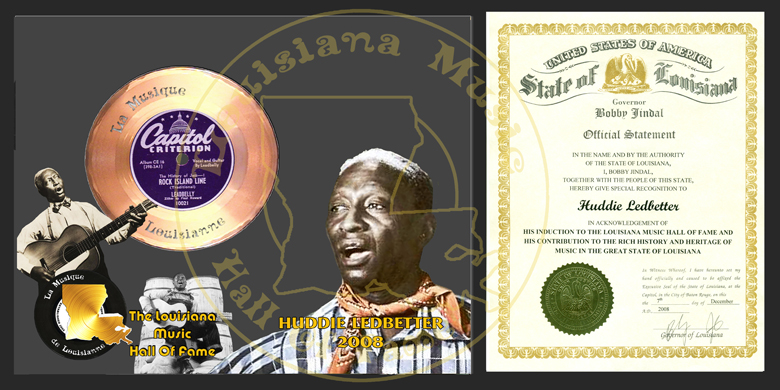 He was probably Louisiana’s first music superstar. While the precise date of his birth is uncertain, it is known that he was born in Mooringsport, just outside Shreveport and that he spent much of his younger life in and out of prisons. Possessing a legendary quick temper, he was arrested and convicted of murder in Texas in 1917 and sentenced to 20 years imprisonment. Released by Texas governor Pat Neff he was back in prison five years later, this time in Louisiana’s Angola State Penitentiary for attempted murder. It was while in prison that he earned his nickname as both a play on his surname and for his physical toughness.

Forklorist John Lomax and his son Alan discovered Leadbelly in Angola in 1933 while searching for singing talent in the nation’s prisons. The following year, they recorded Goodnight Irene. Louisiana Governor O.K. Allen subsequently signed his release and Leadbelly was again a free man. Leadbelly traveled as Lomax’s driver to New York where he signed his first recording contract. He achieved little commercial success with American Record Corp. because label executives insisted that Leadbelly sing blues instead of folk music. The problem with that was he sang folk, not blues.

In 1940, following yet another jail sentence for assault, he found the folk music scene exploding in popularity and he befriended Woody Guthrie and Pete Seeger. Seeger, who attempted to conceal his Harvard education by wearing faded jeans, stood in stark contrast to Leadbelly, who always wore a clean white shirt, starched collar, a well-pressed suit and shoes that were always shined. While in New York, Leadbelly recorded his best-known songs – The Rock Island Line, The Midnight Special, and Goodnight Irene – all of which are folk music standards.

By 1948, he was starting to feel the early effects of the disease that would take his life. He began a tour of Europe in May of 1949 but numbness in his legs and right hand persisted. He was diagnosed with amyotrophic lateral sclerosis (ALS) – Lou Gehrig’s disease. He died just over six months later, on December 6, and was buried in the Shiloh Baptist Church Cemetery eight miles west of Blanchard, Louisiana, near Shreveport.

Six months after his death, Seeger and his group, The Weavers, took Leadbelly’s Goodnight Irene to the number 1 position on the pop charts. Frank Sinatra, Ernest Tubb and Red Foley each recorded covers of the song. The Lonnie Donegan Skiffle Group reached the Top 10 in both the U.S. and in England with The Rock Island Line. Johnny Cash had a Top 40 country hit with it in 1970. Johnny Rivers had a number 20 Billboard Hot 100 hit of Midnight Special in 1965 and Creedence Clearwater Revival also recorded it. Jimmie Rodgers had a number 3 hit in 1957 with Kisses Sweeter than Wine, a song that Leadbelly had adapted from the Irish folksong Drimmer’s Cow. The Highwaymen, riding the crest of the folk music craze of the early 1960’s, had a number 13 hit with Leadbelly’s Cotton Fields in 1962. In New Orleans, however, was the biggest hit of any of his songs by another artist. The Animals changed the name to House of the Rising Sun and it became a number 1 hit for three weeks in 1964 and earned the British group a gold record. Their version is still played regularly on radio stations today, more than 40 years after it was recorded.

Leadbelly had three of his songs designated among the Rock & Roll Hall of Fame’s 500 Songs that Shaped Rock & roll – the Animals’ House of the Rising Sun, Lonnie Donegan’s The Rock Island Line, and his own version of The Midnight Special.

Kurt Cobain covered Where Did You Sleep Last Night in 1993 to close Nirvana’s MTV Unplugged special and The Rolling Stones adapted The Bourgeois Blues for their song When the Whip Comes Down. Others who have covered Leadbelly songs include the Grateful Dead, Gene Autry, Led Zeppelin, Jerry Garcia, and Rod Stewart. Bob Dylan, Pearl Jam, and Van Morrison mention Leadbelly in songs and Pete Seeger wrote a song about him. Leadbelly was inducted into the Rock & roll Hall of Fame in 1988.

In 2008, Huddie “Lead Belly” Ledbetter was posthomously inducted into The Louisian Music Hall Of Fame.

*Bio courtesy of Tom Aswell – author of “Louisiana Rocks – The True Genesis Of Rock And Roll” .