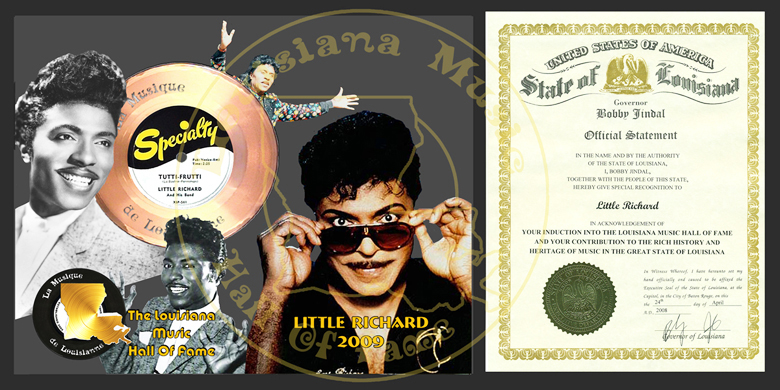 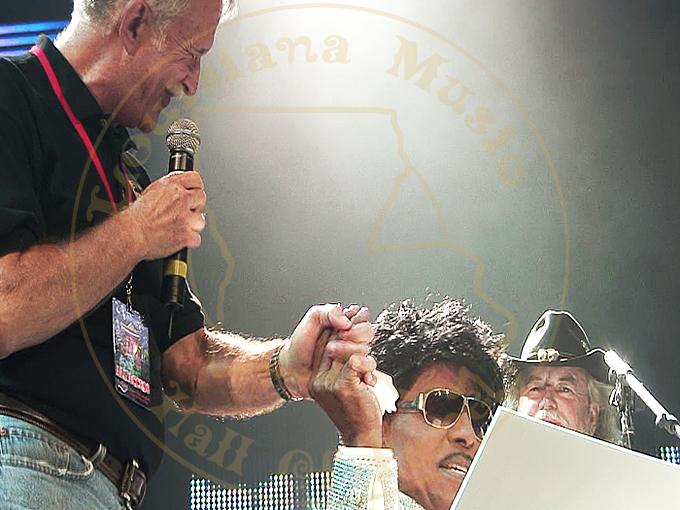 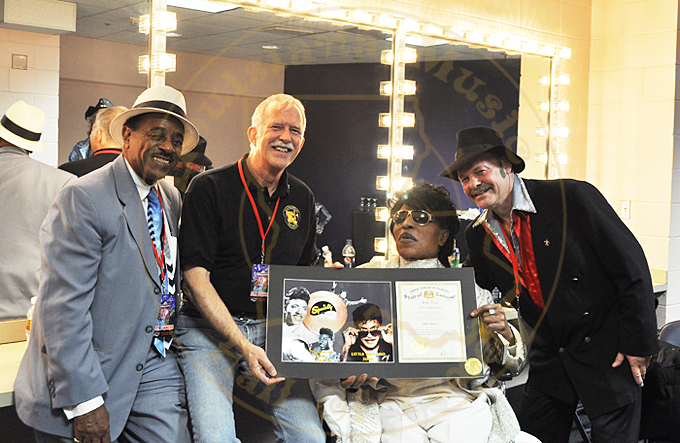 RICHARD (b. Dec. 5, 1932 – ): There are, quite simply, not enough superlatives to describe the impact Richard Wayne Penniman, aka. Little Richard had – and still has – on rock & roll music.  Elvis is credited with introducing the black sound to white audiences but Little Richard, born in Macon, Georgia, did more than anyone else to break down those barriers.  He brought white kids over to black radio stations to hear – and feel – a sound that was so exciting, so authentic, and so unlike anything they’d ever heard before.

In 1952, Little Richard was washing dishes in the Greyhound bus station restaurant in his hometown of Macon, Georgia.  He’d cut a few songs for RCA and Peacock records, but none of them hinted at what was to come.  In 1955, New Orleans singer Lloyd Price, fresh from scoring big with Lawdy Miss Clawdy for Specialty Records, suggested that Penniman send a demo tape to Specialty owner Art Rupe.  Rupe liked what he heard and lost no time flying Specialty A&R man Robert “Bumps” Blackwell into New Orleans to set up a recording session at Cosimo Matassa’s studio.  Some of the city’s top musicians were brought in: drummer Earl Palmer, Saxophonists Lee Allen and Alvin “Red” Tyler, guitarists Edgar Blanchard and Justin Adams, bassist Frank Fields, and pianist Huey “Piano” Smith.  Most of the same musicians were used by producer Dave Bartholomew to back Fats Domino, Roy Brown, Shirley & Lee, and Lloyd Price.  Just whose idea it was to bring in a piano player for a Little Richard session is not quite clear but it soon became apparent that it was a mistake.

The session began on September 14, 1955, and languished for more than two days with nothing to show for it.  Without his piano, Richard was subdued.  Not even his version of Leiber and Stoller’s Kansas City could enliven the listless session.  Blackwell wanted something raw and on the edge, something like the current Ray Charles hit I Got a Woman, but it just wasn’t happening; the studio session appeared fruitless.  Frustrated, Blackwell adjourned with Penniman and the other players for lunch at the Dew Drop Inn.

One story has Richard, seeing the piano on the stage, leaping to the bandstand and launching into “A-wop-bop-a-Loo-Bop-a-Lop-Bam-Boom.”  What followed was a raunchy rendition of Tutti Frutti, a song he’d been using in his shows that smacked of sexual overtones.  Blackwell rushed everyone back to the studio for the few remaining hours for which they were booked.  The song was unacceptable in its present state, so he chased down a local songwriter, Dorothy La Bostrie, to clean up the lyrics.  With Richard, a minister’s son, facing the wall, he sang the lyrics a few times, enough for La Bostrie to get a feel for the song and to write substitute lyrics.

Labostrie remembered it differently.  She said she was listening to the radio on September 3, 1955, when she heard that Bumps Blackwell was looking for songwriters.  Little Richard, on many occasions, has said he wrote the song and that he was cheated out of songwriter’s royalties.  Not so, Labostrie insisted.  She said she got the idea for the song from a new ice cream flavor, tutti frutti.  She said she immediately thought that would be a great idea for a song and kept it in the back of her mind until that day in the studio.

No matter which version is accurate, Huey Smith was excused from the session and Richard took over the piano.  Combining the passion of gospel and New Orleans R&B with the stylings of the local session artists, Tutti Frutti became the first of a string of Little Richard hits recorded in New Orleans for Specialty Records.  It reached number 2 on the R&B chart and number 17 on the pop charts, selling over five hundred thousand copies.  Others that followed included Long Tall Sally (his biggest hit, topping the R&B chart for eight weeks and reaching number 6 on Billboard’s Hot 100), Slippin’ and Slidin’ (number 1 on R&B and number 17 on the pop chart), Rip it Up, Ready Teddy, Heeby-Jeebies, The Girl Can’t Help It (which would become the title track to the Jayne Mansfield movie), Lucille (number 1 and 21 on the R&B and pop charts, respectively), Send Me Some Lovin’ (number 2 on the R&B chart), Keep a Knockin’ (number 2 R&B and number 8 pop), Good Golly Miss Molly (numbers 4 R&B and 10 pop), and Jenny, Jenny (number 2 and number 10).  Matassa remembered Little Richard’s recording sessions at his J&M Studio.  “They were always real high energy just because Richard was that kind of guy,” he said.When playing white clubs, Richard required his band members to wear pancake makeup so as to act gay.  “The band hated that makeup,” he said in a TV Guide interview in 2000.  “If we didn’t put on makeup, they wouldn’t have let us in those white clubs.  They figured we weren’t gonna bother the [white] girls.”

Then, just as abruptly as he appeared upon the scene, Little Richard Penniman, one of twelve children who grew up in poverty in the Deep South, walked away from fame and fortune.  The flamboyant performer who took the stage in sequined costumes, mascara, lipstick and a six-inch pompadour to attack his piano and to shake the rafters in his quivering falsetto, gave it all up, albeit a temporary hiatus.  The stories vary.  One says he witnessed a space satellite flare in the night sky over Australia as it re-entered the earth’s atmosphere.  The other story said he had a close call when an airplane on which he was a passenger caught fire.  Either way, it was on October 13, 1957, the fifth date of a two-week tour of Australia with Gene Vincent and Eddie Cochran.  He unexpectedly turned his back on the life of a rock & roll star, threw his diamond rings valued at eight thousand dollars into the Sydney harbor, and enrolled in Oakwood Bible College in Huntsville, Alabama, to become a Seventh Day Adventist minister.

His exodus from rock & roll lasted five years and on October 8, 1962, he launched his comeback tour in Europe.  Opening for him at the Star Club in Hamburg was an as yet undiscovered group calling themselves the Beatles.  A year later, he again toured Europe with another unknown group, the Rolling Stones, providing the opening act.  In 1964, the Beatles released their own version of Long Tall Sally with Paul McCartney on lead vocal.  Richard next appeared with Chuck Berry, Gene Vincent, Bo Diddley, and Louisiana natives Fats Domino and Jerry Lee Lewis at a rock & roll revival show in Toronto.  In September 1972, he was reunited with the core session artists from his historic New Orleans ‘50s sessions when his album The Second Coming was released.

In 1986, he began a series of live concerts, recording projects, television, film soundtracks, and commercials.  His unique version of the children’s tune Itsy Bitsy Spider was included on the Disney Records’ benefit album For Our Children.  The album went gold, reaping millions of dollars for the Pediatric AIDS Foundation.  He followed that with the Disney album Shake It All About, which featured children’s songs in his unique style.  He also appeared on the children’s shows Mother Goose Rock ‘n’ Rhyme and Sesame Street.  Along the way, he employed two chauffeurs who would go on to stellar careers in show business.  The first was Peter Grant, later Led Zeppelin’s manager, and the second was an employee of Specialty Records whom the company assigned to drive Richard.  His name was Sonny Bono.

On January 23, 1986, Little Richard was one of the first ten inductees into the Rock & Roll Hall of Fame.  That same year, he was featured in the movie Down and Out in Beverly Hills.  He was honored with his own star on the Hollywood Walk of Fame in 1990 and following that, he returned to his hometown of Macon, Georgia, for the dedication of Little Richard Penniman Boulevard.  In 1993, he received the Lifetime Achievement Award from the National Academy of Recording Arts and Sciences at the thirty-fifth Grammy Awards.  The following year he received a Lifetime Achievement Award from the Rhythm & Blues Foundation.  In 1997, he was presented the American Music Awards Distinguished Award of Merit in recognition of his contributions to music history.  He was inducted into the NAACP Image Awards Hall of Fame and in 2003 he was inducted into the Songwriters Hall of Fame.  In 2006, he was featured as a celebrity in a GEICO Insurance television commercial.

On May 30, 2009, while performing in “The Domino Effect” tribute concert for his longtime friend, Fats Domino, Little Richard was inducted into The Louisiana Music Hall Of Fame.