Lloyd Price (Mar 9, 1933–) became one of the earliest architects of rock & roll when Dave Bartholomew signed him to a contract with Specialty Records. On March 3, 1952, he entered Cosimo Matassa’s J&M Studio and with Fats Domino playing the piano, recorded Lawdy Miss Clawdy. Based on a catch phrase from an African American radio personality named Okey Dokey Smith, the song shot to the top of the R&B charts for seven weeks that year. It was included by the Rock & Roll Hall of Fame as one of 500 Songs that Shaped Rock & Roll and would be covered by over 150 artists including Elvis Costello, the Buckinghams, Fats Domino, Little Richard, Larry Williams, Johnny Rivers, Ronnie Hawkins, Conway Twitty, Mickey Gilley, Paul McCartney, John Lennon, and Elvis Presley. Presley also performed it on his 1968 NBC comeback special. 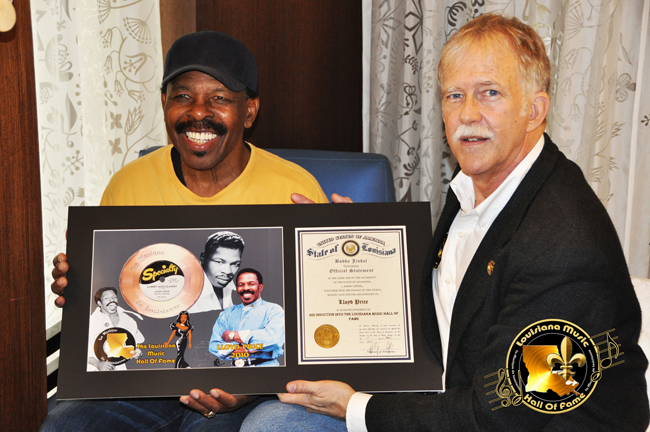 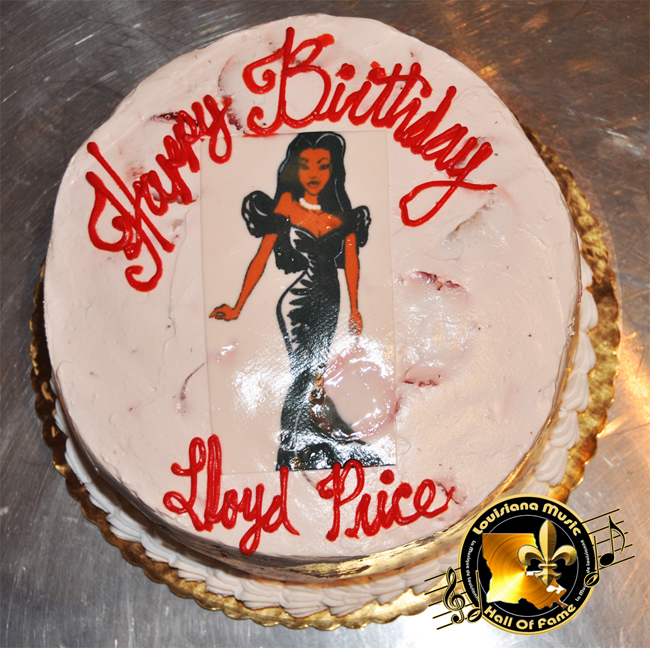 A special Lawdy Miss Clawdy birthday cake from the LMHOF for his 77th birthday.

Price grew up in the New Orleans suburb of Kenner. Influenced early on by Louis Jordan, Roy Milton, and Amos Milburn, he formed his own band with younger brother Leo (who later wrote Send Me Some Lovin’ for Little Richard). Price was 19 when he entered the studio to record for the first time as Specialty Records owner Art Rupe looked on. Session producer Dave Bartholomew was unhappy with pianist Salvador Doucette and was having considerable difficulty getting Lawdy Miss Clawdy the way he wanted it. As if on cue, Fats Domino drove up in his new black Cadillac to pay a social call on Matassa and Bartholomew.

Bartholomew asked Fats to sit in on the session. He at first refused, saying his contract with Imperial Records forbade his participation in a session for another label without Imperial owner Lew Chudd’s approval. After Domino had been lubricated with liquor, however, he declared that he was going to have some fun. With that, Fats played the song through once, adding his own piano introduction and solo. Cosimo started the tape rolling and Lawdy Miss Clawdy was recorded, featuring the surreptitious rolling piano triplets of the top R&B artist in America. Participating incognito, Fats was paid the princely sum of $54.50, union scale for session musicians.

Price had four more R&B Top 10 songs in ‘52: Oooh, Oooh, Oooh (number 4), Restless Heart (number 5), Tell Me Pretty Baby (number 8), and Ain’t It A Shame (number 4). Drafted into the Army in 1953, his string of hits was momentarily interrupted until five years to the day from his Lawdy Miss Clawdy recording session. On March 3, 1957, he recorded Just Because for the ABC-Paramount label. The song hit number 3 on the R&B charts and even crossed over to number 29 on the pop charts.

During his three-year Army hitch, he fronted a large dance band that featured mostly swing music for G.I. audiences. The experience gave him the inspiration to combine the full sound of an orchestra with the bouncy rhythm & blues tempo. His idea proved to be a hard sell, however, because of the pack mentality of record executives who believed that rock & roll had to be performed by small combos. Price persisted and on songs like Stagger Lee, a vocal group augmented his shouting style and a big band, as envisioned when he left the Army, filled out the sound for the recording.

When he performed Stagger Lee on Dick Clark’s American Bandstand show, Clark insisted that the lyrics be cleaned up to present a wholesome sound that would be acceptable to mainstream America. The two men gambling line became two men arguing, thanks to a determined campaign by the Legion of Decency that also resulted in the lines referring to the killing and the barroom to be deleted. In 1960, he again broke into the R&B Top Ten with Question but the rapid pace of his hits was unquestionably slowing. His last Top 20 song was a remake of Errol Garner’s Misty, released on his own Double-L label. It reached number 11 on the R&B chart. Stagger Lee has now been re-recorded over 250 times, and Personality over 150 times.

Price was also an astute businessman. He was a nightclub owner, a recording executive, a songwriter, producer, bandleader, booking agent, and a promoter. He helped launch the recording career of Wilson Pickett on his Double-L label. He also started another record label, Turntable and opened a nightclub that bore the same name.

His business partner Harold Logan was murdered in 1969 and Price moved to Africa where he invested in various ventures, teaming with Don King to promote a music festival in Zaire. The extravaganza drew 120,000 people who came out to see James Brown, B.B. King, Etta James, Bill Withers, the Spinners, and others. Price and King also promoted fights between Muhammad Ali and George Foreman in Zaire and between Ali and Joe Frazier in Manila. He returned to America in the early ‘80s, but for the most part, he stayed away from performing until he was lured into doing a European tour with Jerry Lee Lewis, Little Richard, and Gary “U.S.” Bonds. On March 18, 1994, Price received the Pioneer Award at the sixth annual Rhythm & Blues Foundation ceremonies in Los Angeles and on January 12, 1998, he was inducted into the Rock & Roll Hall of Fame. IN that historic induction, Lloyd Price gained the distinction of being the only artist ever elected by a unanimous first ballot vote.

He currently lives in New York State and has a small empire of Lloyd Price and Lawdy Miss Clawdy branded products ranging from healthful foods distributed through Wal Mart to a line of bowling balls. His new book, “the True King of the 50’s” is a historic panorama of his experiences in music beginning in 1940.

Be sure to visit Lloyd Price’s Official web site at www.lawdymissclawdy.com .