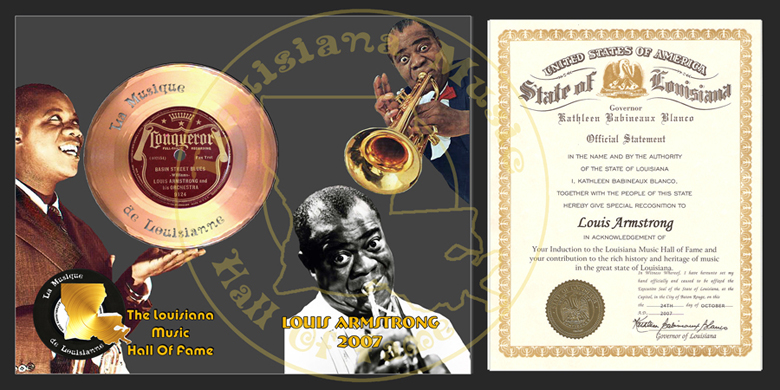 LOUIS ARMSTRONG (b. Aug. 1, 1901 – d. July 5, 1971): Watching film clips of jazz legend Louis Armstrong mopping the sweat from his brow with a white silk handkerchief, one would never guess he spent his early boyhood digging through New Orleans garbage cans in search of food.  A product of one of the poorest sections of the city, he developed street smarts and a dirty mouth at an early age.  Sent to the Jones Home for Colored Waifs at the age of 13 for firing a pistol on New Year’s Eve, he got his first introduction to the cornet.

A year later he played places like the Come Clean Dance Hall, the Funky Butt Hall, and the Mahogany Hall.  He worked the infamous Storyville district as a musician and as a pimp but abandoned the seamier side of life when one of his girls stabbed him.

Relocating to Chicago in 1922, he hooked up with Joe “King” Oliver’s Creole Jazz Band.  In 1935 he hired as his manager Joe Glaser, rumored to be connected to the Al Capone mob of Chicago.  Whether or not the rumors were true, Glaser proved to be a capable manager and freed Armstrong up to concentrate on his music with the knowledge that his manager was taking care of the business details.  Glaser remained his manager until his death in 1969.

In May of 1964 he bumped the Beatles out of the number 1 position on the Billboard Hot 100 with Hello Dolly and in 1968 he had another number 1 hit with What a Wonderful World.  Both songs were indicative of his transition from playing the horn to performing vocals, a move necessitated by failing health following a 1959 heart attack.  It was his 1946 recording of West End Blues, however, that was chosen by the Rock & Roll Hall of Fame as one of 500 Songs that Shaped Rock & Roll.

Armstrong was inducted into the Rock & Roll Hall of Fame.  Perhaps Satchmo said it best: “If it hadn’t been for jazz, there wouldn’t be no rock & roll.”  On July 6, 1971, Satchmo died in his sleep at his Queens, New York, home.  His funeral attracted over 25,000 mourners.  Pallbearers were Bing Crosby, Ella Fitzgerald, Guy Lombardo, Duke Ellington, Dizzy Gillespie, Count Basie, Frank Sinatra, and Johnny Carson.

In October of 2007, Louis Armstrong was Inducted into The Louisiana Music Hall Of Fame.

To learn and experience more, please visit Louis Armstrong’s Inductees Gallery and his

Inductees Videos Gallery under “GALLERIES MUSIQUE” on this site.

Be sure to visit Louis Armstrong’s Inductees Video Gallery and Inductee’s Gallery under “GALLERIES MUSIQUE” on this site.