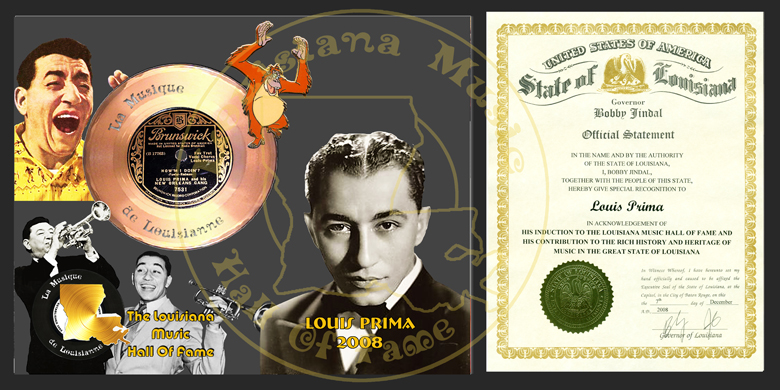 Flamboyant, boisterous, crude, and talented are all adjectives that describe Louis Prima and his 1950s Vegas act.

Born and raised in New Orleans, Prima studied violin while a student at Jesuit High School.  When his brother,

also a musician, went on tour and left an old trumpet behind, Louis picked up the instrument and was hooked.

Teaching himself to play, he learned well enough to begin playing professionally in the late ‘20s and in 1934,

at the urging of Guy Lombardo, he moved to New York.

He formed a band called the New Orleans Gang that quickly became a popular draw in New York’s Famous Door.

Though the band recorded for several labels, Prima was a relative unknown except for his composition of Sing,

Sing, Sing that was a hit for Benny Goodman.  In fact, Goodman’s coronation as the King of Swing was the

direct result of Prima’s composition.  Prima wrote many hit songs, including Robin Hood, which was a hit for

times in one year at the greatest venue of the time, New York’s Paramount Theater.  He also played several

famous black theaters, including the Royal in Baltimore, the Paradise in Detroit, the Regal in Chicago, the Howard

in Washington, D.C., and the Apollo in New York.

act.  Prima broke up his band in 1950 and he and Smith formed their own nightclub act.  She became his fourth wife in

they took their show to Las Vegas.  Booked into the Sahara Hotel, they billed their act as the “Wildest Show in Vegas”

and it lost no time living up to its billing.

Capitol Records signed the two and he scored hits with Just a Gigolo and Oh Marie.  In 1958 Prima and Smith won

a Grammy for That Old Black Magic, which was a number 18 hit on Billboard’s Hot 100.  Prima and Smith, along

with Butera and the Witnesses, were featured in the movie Hey Boy! Hey Girl!

Prima and Smith divorced in 1961 and in 1967, Prima provided the voice of orangutan King Louie in the Walt Disney

animated feature The Jungle Book.  He also sang the film’s hit song I Wanna Be Like You.  Prima and Phil Harris

record for combined sales of the two albums.

By the early ‘70s, Prima’s act no longer was an attraction in the new Vegas so he and Butera moved back to New

Orleans where they got steady work for the tourist crowd. In October 1975 he underwent brain surgery for the removal

of a tumor and never regained consciousness.

He remained in a coma for nearly three years and in July of 1978, he contracted pneumonia and was administered last

rites.  He survived for another six weeks, however, before dying on August 24.

In 2008, Louis Prima was posthumously inducted into The Louisiana Music Hall Of Fame.

Be sure to visit Louis Prima’s web site at www.louisprima.com .