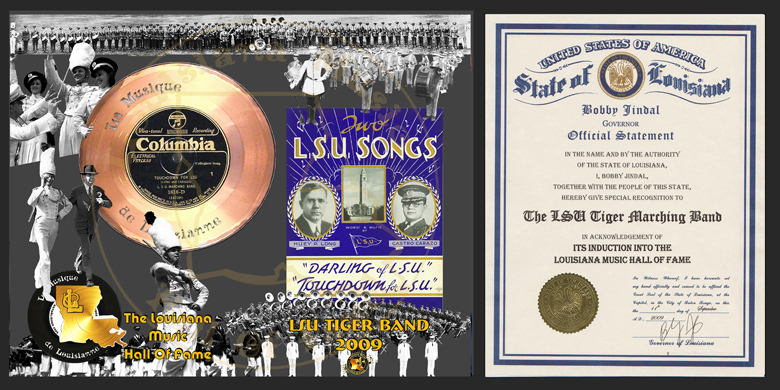 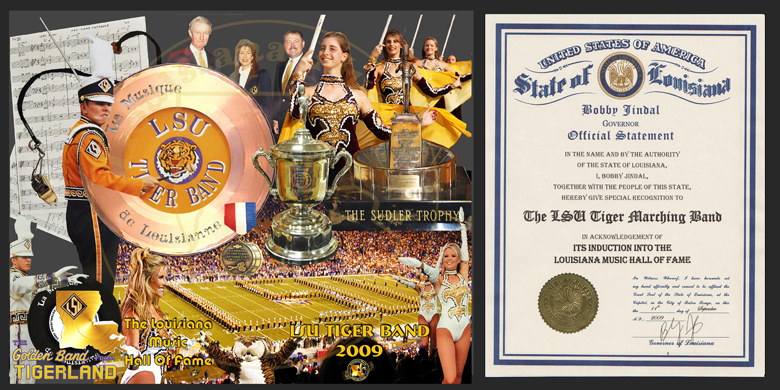 The LSU Tiger Marching Band is the first college marching band to be inducted into a music hall of fame, and the distinction is just the latest in a long series of singular achievements that easily demonstrate that it has earned the honor.  That doesn’t even account for the way the Tiger Band is weaved into Louisiana’s history:  no other school band was founded by a future governor, has had fight songs written by another governor, or benefited from having a famed jazz orchestra leader as its bandmaster.  Since “Tiger Rag” originated as a Dixieland jazz song, every time the Tiger Band enters the football field blasting the notes of that song to wild cheers, it is paying homage to the indigenous music of Louisiana.

Few other college bands are as integral to the identity and lore of their athletic programs and campus culture. Few are as loved and supported by its fans and revered even by those from opposing ones.  Finally, few other band programs have produced as many musicians, music educators and famed alumni in the music world.  Quite simply, this is a hall of fame band and everyone who participates in the program is changed forever from the experience.

With the nickname “The Old War Skule” it’s no surprise that the first music organization at Louisiana State University would be a military band.  In 1893 two student cadets formed an 11-member band- Wylie M. Barrow was named captain of the new group and Ruffin G. Pleasant, a future governor of the state, served as director. In the long tradition of musicians surviving by playing for tips on the street, at times the fledgling band wore advertising sandwich boards in downtown Baton Rouge and performed for donations to help pay expenses.

By the turn of the century the Cadet Band also became a marching unit. Tours of the state and appearances at Mardi Gras festivities in New Orleans became early traditions. In 1904, the band joined four companies of cadets from LSU for a performance at the St. Louis World Exposition. The band had become an important element of life on the campus. The first faculty director was W.B. Clarke, a blind and gifted musician and composer, and the first full-time director was Charles A. Kellogg, a former trombone soloist in Patrick Gilmore’s famous band.

When LSU’s music department was established in 1915, all music students were required to perform in the Cadet Band.  The all-male band marched in numerous Carnival parades including the Rex Parade in New Orleans on Mardi Gras Day. It also accompanied the football team to Atlanta for the Georgia Tech game.

In May of 1916, the band led the inaugural parade for Louisiana’s new governor with a crowd estimated in the thousands. The event had a special meaning to the band, as the Governor-elect was Ruffin G. Pleasant, co-organizer of the band in 1893.

The Cadet Band’s role at football games was minor compared to its other responsibilities of playing for military drills and programs. The band’s first halftime appearance was in 1924. By the late 1920’s the band had grown to number more than 100 and was already earning its spot alongside the country’s university marching band elite.

When Louisiana’s famous populist Governor Huey P. Long took a personal interest in the LSU Band in the early 1930’s , major changes set the band on a unique course toward national prominence. Long’s plan was to make LSU one of the country’s greatest universities. This included making the band “second to none.”

In 1934 Long attended a show at the famed Blue Room of the Roosevelt Hotel in New Orleans featuring jazz dance orchestra leader Castro Carazo and sent a bodyguard to bring the Costa-Rican born celebrity to his table. LSU Alumni Association President and Tiger Band alumnus Dr. Charlie Roberts recalls how Castro told him the encounter went. “Huey said ‘You are now the band leader at LSU, come with me, we’re returning to LSU.”

It was Long who saw to it that the football band traded in its military dress for a more showy stadium look and introduced the LSU bands to its current colors, purple and gold. Thanks to Long’s determination to have the biggest and the best in the land, the band soon numbered nearly 250 and was indeed one of the country’s largest. As intent on showmanship as he was size, Long encouraged the football band to become more dazzling. Halftime shows soon won LSU the nickname “The Show Band of the South.”

Long and Carazo co-wrote several of LSU’s songs, most notably “Touchdown for LSU,” (still the predominant song in the band’s famed pregame show in Tiger Stadium), “The LSU Cadets March” and “Darling of LSU.”

Despite Long’s assassination in the fall of 1935, the band continued to enjoy a period of unmatched evolution and fame thanksto the impeccable style and musicality of Carazo, In 1937 “Fight for LSU,” LSU’s official fight song, was published by Carazo with lyrics by W.G. “Hickey” Higganbotham.

By the time Carazo left LSU in 1940, the Tiger Band was known far and wide as one of the country’s premier show bands. The start of the second world war, however, resulted in changes on the LSU campus that affected the ranks and the look of the band. With so many young men heading off to war, the size of the band was greatly reduced. During the Carazo years, female students had appeared with the band as drum majorettes, but not in the ranks of musicians. In 1943 and 1944, Director J.S. Fisher supplemented the all-male band with female members. This led the way for LSU coeds to become regular members of the marching band.

The arrival of L. Bruce Jones as director in 1945 signaled a move back to the show band values developed by Carazo and the establishment of various characteristics familiar today. The band department was established as a component of the LSU School of Music, one of the few in the south at that time. By the 1950’s, the band would continue its reputation for halftime extravaganzas employing intricate formations and patterns. Its celebrity was recognized when famed march composer Karl King wrote the “LSU Tiger Triumph March,” first played in Tiger Stadium at the Tennessee game of 1952. The marching Tigers were also increasingly the traveling Tigers. “L-S U” formations were seen at the State Fair Stadium in Shreveport and in Texas, Georgia, Florida, Mississippi and Tennessee.

Thomas Tyra, an assistant under L. Bruce Jones, was in the nation’s youngest director of a major college band when he was named the 14th bandmaster of the 147-member Tiger Band in July of 1959. With Tyra came an innovation-the Ballet Corps. With a name change and a few alterations in costuming, the Ballet Corps has evolved into today’s famous feature unit, the LSU Golden Girls danceline.  Following the 1958 national championship season and Sugar Bowl, football fame and success at LSU afforded the Tiger Band continuing exposure on nationally televised games and at postseason bowls.

The band traveled to 8 bowl games during the twelve years (1964-1976) that Dr. William F. Swor served as band director.  Swor introduced the Twirling Corps (majorettes eventually called “Tigerettes”) in 1965; the LSU Colorguard flag unit was first established in 1971. It was also during his tenure that “The Golden Band From Tigerland” nickname was first introduced.  If that wasn’t enough, Swor was also the architect of the dramatic and famous “Pregame Entrance” combining the traditional “Hold That Tiger” theme with “Touchdown For LSU” and ending with the band forming a “tunnel” for the football team’s entrance.  Much of the band’s works throughout this era were brilliantly arranged by John Edmunds and were picked up for use by other contemporary bands.

The program hit its zenith in 1970 when LSU was named the All-American College TV Band in a one-time national contest sponsored by Chevrolet. After marching the Orange Bowl Parade on New Year’s Eve and performing at halftime of the 1971 Orange Bowl game on New Year’s Day, the Tiger Band flew to San Francisco. On January 2, the band performed a different show for another national television audience and officially received the award at halftime of the East-West Shrine Bowl. The trophy was presented by Meredith (“The Music Man”) Willson, confirming LSU’s prominence among the country’s top university marching bands. No wonder alumni of this era refer to Dr. Swor as “the Bear Bryant of college band directors.”

Under the leadership of Nicholas Rouse (1976-1980), the band acknowledged a national trend among most high school and university bands and made the transition to the modified “corps” style of halftime show design that is in existence today. 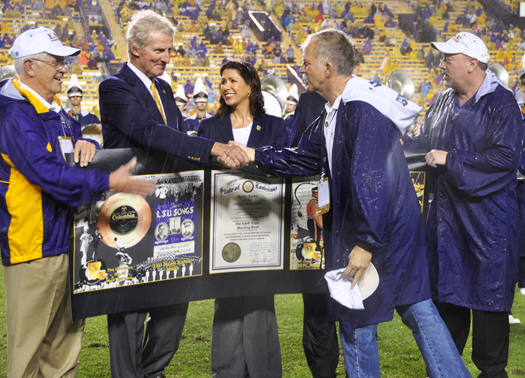 Today’s Tiger Band fields 325 marching members and continues the fine traditions established over the past century. The 2009 marching Tigers will be the 30th edition to be led by current LSU Director of Bands Frank B. Wickes.  Associate Director of Bands Dr. Linda R. Moorhouse  joined the staff in 1985and now oversees all aspects of the Tiger Band, from teaching the drill and music, to drill writing and show design. She also oversees the Golden Girls and Colorguard. In 1998 Roy King was named Assistant Director of Bands to oversee the Bengal Brass basketball pep band and to assist with Tiger Band in drill writing and field teaching.

The Tiger Band represents LSU in a variety of ways. In addition to regular season and post-season television broadcasts, it has made appearances in Mardi Gras parades, at NFL games (most recently many years for the New Orleans Saints), at Walt Disney World and Universal Studios, high school marching festivals, and in the 1988 Warner Brothers film, “Everybody’s All-American.”

The band continued to distinguish itself through the Wickes years into the transition of Moorhouse becoming the next director.  In 1997, Southeastern Conference Band Directors unanimously voted the LSU Tiger Band the best marching band in the SEC in a survey taken by the Northwest Arkansas Times Newspaper of Fayetteville Ark.  In 2002 the LSU Tiger Marching Band received the Sudler Trophy, the “Heisman Trophy” for college marching bands. And in 2008 ESPN, Paramount Pictures and Lucasfilm sponsored the “Indiana Jones Battle of the Bands” music video contest. The Tiger Band’s interpretation of the movie theme with entertaining band moves, Tiger mascot and Golden Girls Indiana Jones wardrobe and cameo appearance by Head Football Coach Les Miles put its video production in a class of its own and the vote was never in doubt.  “The Golden Band from Tigerland” had won yet another national competition.

The LSU Tiger Marching Band was formally inducted into The Louisiana Music Hall Of Fame at a media reception at Lod Cook Alumni Center on the LSU campus on September 11, 2009.  The next night the band was publicly inducted during its halftime show that saluted the Louisiana Music Hall of Fame and featured songs of three LMHOF inductees: “Carnival Time” by Al Johnson, “Barefootin’” by Robert Parker and “Mr. Big Stuff” by Jean Knight. 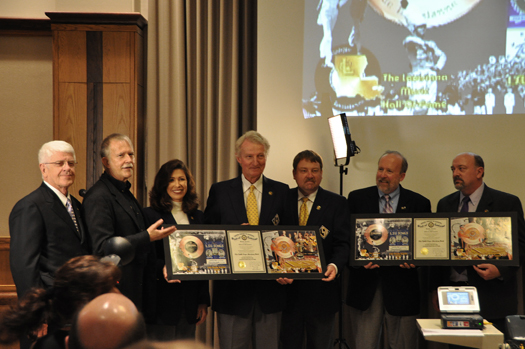 Bio compiled by Del Moon and Mike Shepherd and based on Frank B. Wicke’s “THE MARCHING TIGERS: A Brief Look at Over 100 Years of the LSU Tiger Band”  For more and current info on the LSU Tiger Marching Band please visit their pages at the LSU department of bands at http://www.bands.lsu.edu/ensembles/tiger_band.php .