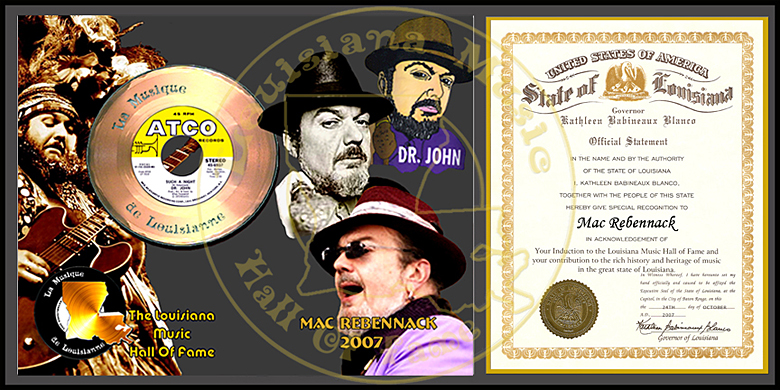 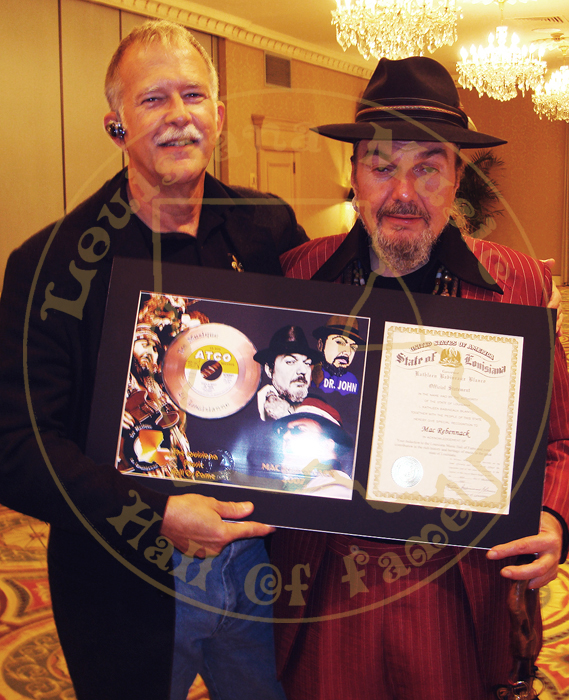 Right Place, Wrong Time doesn’t quite do justice to the career of Malcolm John Rebennack, Jr., judging from his impressive

list of credits.  Rebennack, better known as Dr. John, has moved into his role as ex officio ambassador of goodwill for

Born on November 21, 1940, he spent many hours as a kid hanging around Cosimo Matassa’s studio, where New Orleans

musicians recorded their national hits.  His patience paid off when he was called to sit in on sessions, playing guitar for

The session work evolved into one-nighters all over Louisiana, Arkansas, Oklahoma, Texas, and the Gulf coast.

At one of those gigs in Jacksonville, Florida, a fight broke out and Rebennack tried to intervene.  A gun was fired and

Rebennack got a mangled left index finger for his trouble, ending his career on the guitar but ushering in a new career as

a pianist and organist with the help of James Booker.

In the early ‘60s, newly-elected district attorney Jim Garrison, who owed his election in part to the support of New Orleans

club owners, stuck a dagger in the heart of local tourism when he began a shutting downs clubs for gambling, prostitution,

and anything else he considered morally corrupt.  Suddenly, the New Orleans nightlife began to be eerily reminiscent

of the famed Bossier City Strip that had been shut down in north Louisiana.

With gigs drying up all over town in the wake of the crackdown, musicians began a mass exodus to more attractive

venues, spurred on in part by the devastation inflicted on New Orleans by 1965’s Hurricane Betsy.  Rebennack, like the

others, decided to seek his fortunes in Los Angeles by way of Fort Worth, where he first underwent drug rehab.

In California, he teamed up with an old New Orleans friend, Harold Battiste who was working as a producer for Sonny & Cher.

Battiste hired Rebennack for road work with the duo.  He also got Rebennack work in Los Angeles, where he soon became

him to develop his Dr. John character and it was Sonny & Cher who gave him free studio time at the end of their own sessions

that allowed him to record tracks that eventually become his critically acclaimed Gris-Gris album for Atco Records.

Word about Dr. John’s unique style spread and soon he was being sought out to work with Eric Clapton, Mick Jagger,

The Band, and Bob Dylan.  The rest of his curriculum vitae included work as a keyboardist, vocalist, or multi-instrumentalist

As a demonstration of his versatility, Dr. John won Grammy awards for Best Jazz Vocal Performance (1989), for Best

Eric Clapton, and others (1996), and for Best Pop Collaboration With Vocals – with B.B. King for Is You Is, Or Is You

is best known, however, for his June 1973 hit Right Place, Wrong Time, named by the Rock & Roll Hall of Fame as one of

500 Songs that Shaped Rock & Roll.  The song reached number nine on the Billboard Hot 100 and number 19 on the R&B

charts, was backed by the Meters, and produced by New Orleans’ Allen Toussaint at his Sea-Saint studio.  It was included,

along with Fats Domino’s White Christmas, in the soundtrack of the 2000 John Travolta movie Lucky Numbers.  In

He remains active and is considered an icon among New Orleans musicians.

On December 28, 2007, at the Monteleone Hotel in New Orleans, Mac Rebennack was inducted into The Louisiana Music Hall Of Fame.

More info on Mac Rebennack/Dr. John  is available at www.drjohn.org.