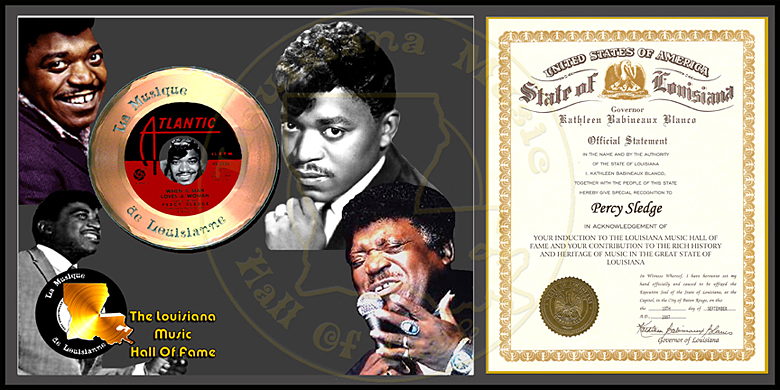 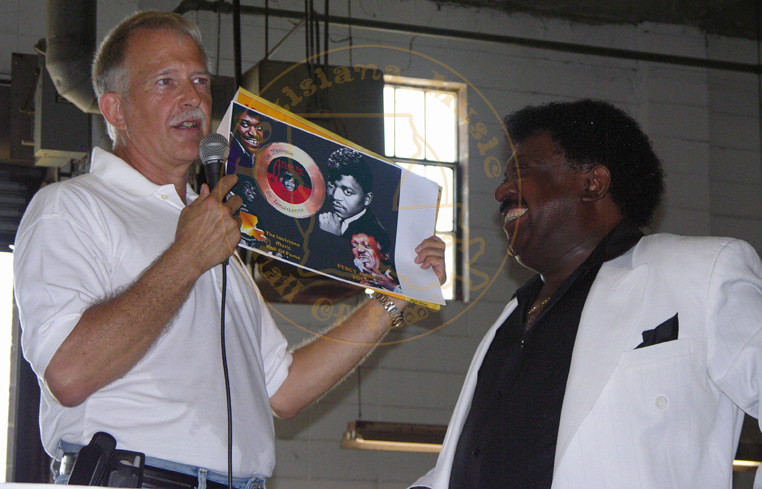 A stellar second baseman, his career plan was to become a professional baseball player.  But when he recorded When a

Man Loves a Woman in Muscle Shoals, Alabama, while still in his baseball uniform right after playing a game, everything

Sledge, accompanied by his wife and daughter, sat down for a quick interview just before taking the stage at the annual Cattle

With his characteristic gap-toothed grin that is as much his trademark as his distinctive vocal stylings, he nodded toward his

wife seated at the opposite end of the table.  “I met her,” he said.  “She’s from Morgan City and we moved to Baton Rouge.

You couldn’t drag me away from here now with a team of horses.”

On April 10, 1966, he walked into a recording studio in Muscle Shoals, Alabama, to record his signature hit When a

Man Loves a Woman.  He was still wearing his baseball uniform.  “Yeah, you heard right,” he said when asked about the

accuracy of the story.  “I think I was well on my way to a professional baseball career.  I was a pretty good second baseman

back then.  My dream was to play for my favorite team, the Cincinnati Reds.”

Typical of many aspiring singers, the road to stardom wasn’t a smooth one.  He first had to pay his dues by working in

the farming fields of Leighton before securing a job as an orderly at Colbert County Hospital in Sheffield, Alabama.

All the while he played baseball and performed and toured when he could with the Esquires Combo.  One of his hospital

patients was a friend of record producer Quin Ivy and introduced the two to each other.  An audition followed and Sledge

was signed to a recording contract.  Unlikely as it may seem, When a Man Loves a Woman was his very first effort.

Ivy released the single as an independent and licensed it to Atlantic Records.  Atlantic lost no time in buying out Sledge’s

contract and by May 1966, the song had climbed to number one on both the pop and R&B charts, remaining on the charts

for thirteen and sixteen weeks, respectively.  Other hits followed in quick succession, including Warm and Tender Love

(number 91), Out of Left Field (number 59 and featured in the Tom Cruise/Paul Newman movie The Color of Money),

Though it was his lowest-ranking hit, My Special Prayer is perhaps his most beautiful ballad and one with which he opens

each of his concerts. 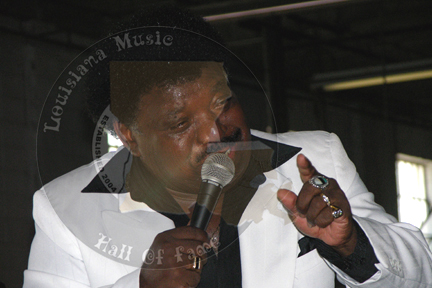 The first gold record for Atlantic, When a Man Loves a Woman, was a song Sledge had only hummed while picking

cotton as a youth.  He improvised the lyrics while performing at a frat party at the University of Mississippi.  Atlantic

transcendent moment.”  He described the song as “a holy love hymn.”  As if its first time around were not enough,

Award-winning movie Platoon and in the 1994 Meg Ryan film When a Man Loves a Woman.  When it hit the charts a

second time, reaching number two in Britain, it led to personal appearances by Sledge on Saturday Night Live and

Entertainment Tonight, which in turn led to extended concert tours in the U.S. as well as Africa and Europe, where

the song was featured in a Levi’s Jeans commercial.  He plays about a hundred dates per year in the U.S. and Europe.

Despite, or perhaps because of the resurgence of his career, Sledge, in 1994, fell into a trap that has become familiar to

entertainers from Willie Nelson to Redd Foxx.  Whether it wants to make an example of high profile personalities

or not remains unclear, but the IRS was soon hot on Sledge’s trail for allegedly failing to report more than $260,000

in income.  He was subsequently ordered to pay more than $95,000 in back taxes, penalties, and interest, sentenced to

Sledge, besides picking up five gold and two platinum albums while at Atlantic, also was the first recipient of the Rhythm &

Blues Foundation’s Career Achievement Award.  He is a regular feature at events such as the Gulf Coast Jam, Port Arthur’s

Mardi Gras celebration, and other Southwest Texas productions.  He even made a television ad for white Baton Rouge

attorney L.D. Sledge.  Standing next to the barrister, he opened the commercial saying, “We’re not brothers, but….”

Sledge was a close friend of the late Otis Redding.  “Once, when I was in a recording session, I took a little break and

called him at his studio and we talked for awhile,” he said.  “I asked him what he was working on and he said he was

cutting the old Frank Sinatra song Try A Little Tenderness, which really blew me away.  I told him that was really

weird because I was recording it, too.”  He was also a close friend of the late Clarence “Gatemouth” Brown and toured

with him.  When told that Brown, who had lost everything when Hurricane Katrina destroyed his Slidell, Louisiana

home, had just died in Houston of complications from heart disease and cancer, Sledge was stunned and saddened.

Asked to name his favorite singer, Sledge declined.  “I like them all,” he said.  “I listen to Otis, Elvis, Merle Haggard,

I just couldn’t name a favorite.”  As for any plans for retirement, there are none.  “I love performing,” he said.  “I will never

quit as long as I’m able to draw a breath.”

the Rock and Roll Hall Fame as one of 500 Songs that Shaped Rock.

On May 11, 2007 in performance in Baton Rouge, Louisiana, Percy Sledge was inducted into The Louisiana Music

More info on Percy Sledge is available at www.psledge.com and www.percysledge.com.