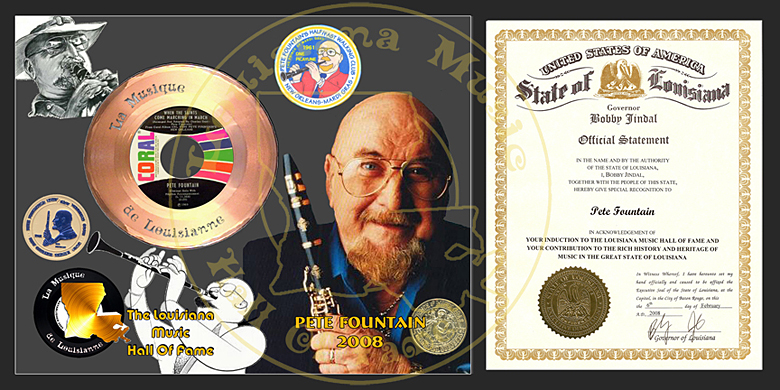 PETE FOUNTAN (b. July 3, 1930 – ): Born in the cradle of American jazz, Pete Fountain was a skinny boy who spent too much of his time hanging around the front door of the Top Hat Dance Hall, a stronghold of Dixieland Jazz in New Orleans.

In 1955, he was a member of the Dukes of Dixieland but until 1956, be-bop and rock and roll were the hottest sounds going and it was difficult making a living playing jazz, even in New Orleans, the home of jazz, so with a wife and three small children to support, he gave up music if only temporarily.

But the very next year, Lawrence Welk, host of the nation’s top-rated television show, hired Fountain and for the next two years, he was the most famous jazz musician on television, his name became a household word, and New Orleans Jazz made a comeback.  After two years in Los Angeles, Fountain likewise made a comeback – to New Orleans to open his own jazz club in the heart of the French Quarter.  Since its opening in 1959, it has expanded into the largest jazz club in the city.

He has performed on The Ed Sullivan Show, as well as on Bing Crosby, Bob Hope, and Andy Williams specials and performed fifty-nine times on The Tonight Show with Johnny Carson.  He also performed at four U.S. State Dinners, for four U.S. Presidents, for Pope John Paul II at the New Orleans Papal Mass with an audience of over 400,000.

He has recorded over ninety albums, three of which went gold.  He also received a gold record for his single Just A Closer Walk With Thee.  He was voted the number 1 Jazz Clarinetist for thirteen consecutive years in the Playboy Readers Poll.  He was King of Bacchus, and received an Emmy for the 1990 Super Bowl Pre-Game Music.  He received the 1998 Lifetime Achievement Award in Music.  Among those with whom he has performed are Louis Armstrong, Harry James, and Harry Connick, Jr.

On March 18, 2007 at Hollywood Casino in Bay St.Louis, MS, Pete Fountain was inducted into the Louisiana Music Hall Of Fame. 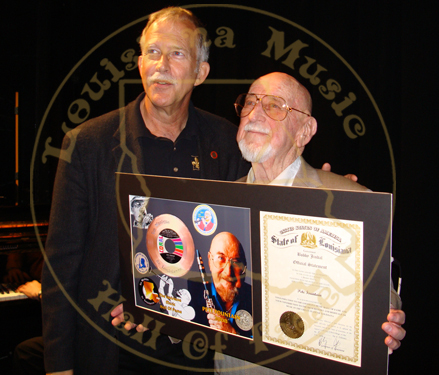 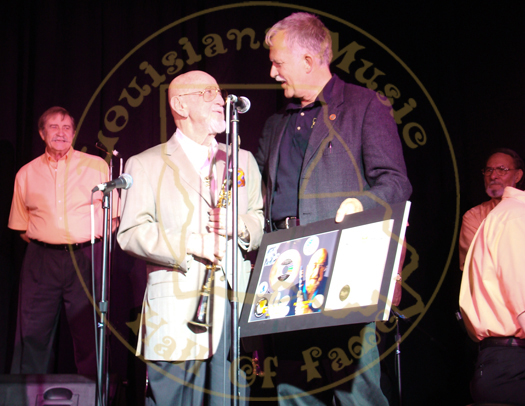