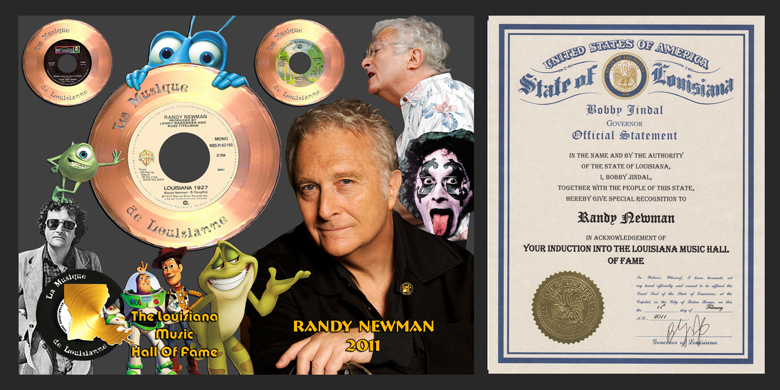 He wasn’t born in New Orleans – or Louisiana for that matter – but Randall Stuart “Randy” Newman, whose father was a U.S. Army captain stationed in Sicily during World War II, spent most of his childhood summers in New Orleans.  He also lived with relatives in Jackson, Mississippi and Mobile, Alabama, during his father’s extended absences but it was the rich culture of New Orleans that would influence his writing and singing.

Only weeks after he was born on November 28, 1943, Newman moved with his mother from Los Angeles to New Orleans to live with her family.  He still holds the Crescent City close to his heart, confessing in a 1988 interview that it was his favorite place in the U.S. because of its people and its music.  Though he was influenced to some extent by Bob Dylan and Arthur Alexander, his music owes more to New Orleans, especially Fats Domino and Ray Charles.  Newman developed his own unique style that makes his work instantly identifiable.

In 1968 he debuted with Randy Newman, and before long an unusually wide range of artists were recording his songs. Critics lauded the musical depth, edge and literary quality of his lyrics as the 70’s brought 12 Songs, Live, the classic Sail Away and brilliant and controversial Good Old Boys. Born Again followed.

Little Criminal caught the public’s ear with the hit “Short People”. His best-known album Good Old Boys features a song called Rednecks, which addresses the sensitive issue of racism in the Deep South.  As a Jew, he experienced first-hand the sting of racism when a girl once invited him to a cotillion ball.  The night of the dance her father called to say it was all a mistake because no Jews were allowed.  Many misunderstood his use of the N-word in Rednecks, but the lyrics were biting satire, a critical commentary on an outdated racist system whose time had passed.  Generally, it was those who refused to recognize that fact who were most offended by the song.  Louisiana 1927, on the same album, is a song about six feet of water in Evangeline and the widespread destruction inflicted on South Louisiana by the horrific flood of 1927.  Two cuts on the Good Old Boys album, Kingfish and Every Man a King, are about colorful – and controversial – Louisiana Governor Huey P. Long. 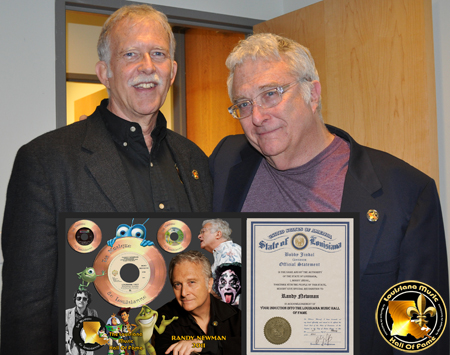 Likewise, his song Naked Man has ties to New Orleans.  His inspiration for the song came from an attorney friend in New Orleans who defended a man accused of stealing a woman’s purse while naked.  His bizarre and somewhat unlikely alibi was that he was in bed with a married woman when her husband came home.  He jumped from her bedroom window unclothed and was running down the street when he met another naked man carrying a purse.  The second man, he said, handed him the purse with no comment and disappeared into the darkness, leaving the defendant with the burden of explaining not only his nakedness, but the purse as well.

In 1971, Newman wrote the soundtrack for the Norman Lear satire Cold Turkey, about an entire town that launched a campaign to quit smoking.  Meanwhile, his reputation as a songwriter was enhanced when Judy Collins, Dusty Springfield and Peggy Lee recorded his songs.  Three Dog Night scored a number-one hit with his Mama Told Me Not to Come in 1970.  That same year, Harry Nilsson recorded an entire album of his compositions, Nilsson Songs Newman.

In the Eighties, Newman’s foray into film composing earned him his first two of twenty Oscar nominations, six Golden Globe nominations and fourteen Grammy nominations. First came Trouble In Paradise and then the  Grammy-winning score for The Natural followed. Next, Land of Dreams was considered another breakthrough work.

He was nominated for two Academy Awards for his soundtrack for the movie Ragtime.  He also received an Oscar nomination in 1996 for You’ve Got a Friend from the Disney animated film Toy Story.  In the Nineties, Newman earned an Emmy and several more Grammys for work on films like Toy Story, James and the Giant Peach, Bug’s Life and Toy Story 2. Newman also tickled his adult audience with his darkly hilarious take on Faust. The four-CD compilation: Guilty: 30 Years of Randy Newman and Bad Love followed, and in 2002, Newman won his first Oscar for Best Original Song for Monsters Inc. He has also earned 5 Grammy awards and 2 Emmy awards throughout his career. 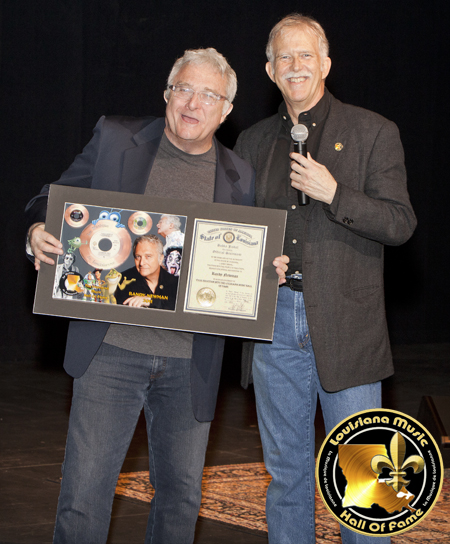 The Randy Newman Songbook, Vol. I (2003), his first effort for Nonesuch, introduces powerful new solo versions of early classics and recent gems alike. The eighteen songs are an intimate and powerful reminder of the enduring work that Newman has established. In 2008 he released Harps and Angels; for Nonesuch records. His first collection of new songs since 2009’s Bad Love.

Most recently, Newman wrote the songs and score for Disney’s The Princess and the Frog as well as Toy Story 3. He has earned two more Academy Award nominations(19 total) in the Best Original Song category for Almost There and Down In New Orleans. Two of his three Emmy nominations, works for the television series “Monk” resulted in Emmy Awards in 2004 and 2010. Randy Newman was inducted into the Songwriters Hall Of Fame  in 2002

Like Rednecks, another of his songs, 1977’s Short People was misinterpreted and predictably, it offended many listeners who didn’t understand what he was trying to say.  The resulting hoopla propelled the song all the way to number two by January of 1978, holding onto that position for three weeks and remaining on the charts for twenty weeks.  His recording of Sail Away was one of 500 Songs that Shaped Rock & Roll, as chosen by the Rock & Roll Hall of Fame.

Randy Newman has long been one of the most musically and lyrically ambitious singer-songwriters ever to be at play in the fields of popular music.

On February 11, 2011, Randy Newman was inducted into The Louisiana Music Hall Of Fame during a concert at the Manship Theater of the Shaw Center for the Arts in Baton Rouge, LA and on February 13, 2011 he won the best motion picture soundtrack Grammy for Toy Story 3.

More info on Randy Newman is available at http://randynewman.com