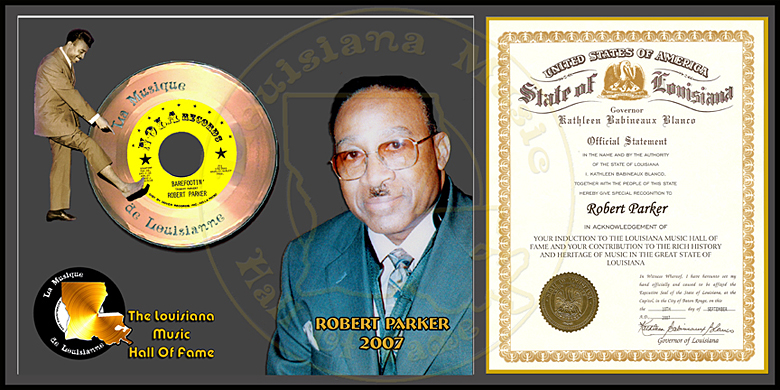 Though he had only one major hit as a solo artist, Robert Parker was an integral part of the New Orleans music scene for many years.  He figured prominently in the nurturing of the Crescent City’s rhythm & blues tradition, beginning with the legendary Professor Longhair who gave him his first break while he was still a teenager.  While praising Parker’s musical skills, one internet web page had the audacity to proclaim that there were few soul, funk, and R&B records to come out of New Orleans which made “a serious dent” on national charts.  Homage to Parker notwithstanding, that uninformed claim would probably be news to the likes of Fats Domino, Little Richard, Big Joe Turner, Ray Charles, Guitar Slim, or Ernie K-Doe. 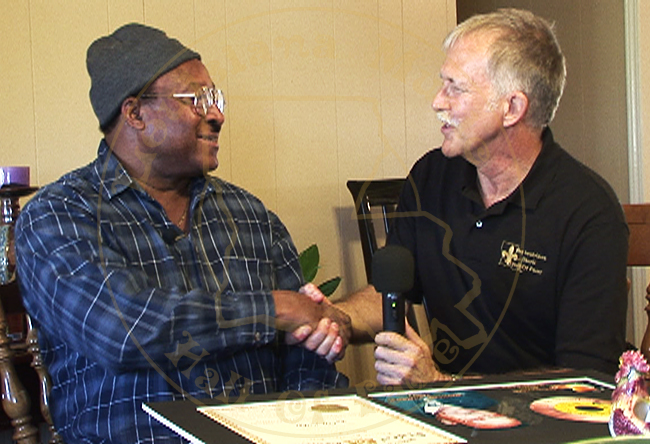 Born on October 14, 1930, Parker grew up on Melpomene (now Martin Luther King Jr. Boulevard).  His boyhood idol was Louis Jordan and he decided early on that he wanted to play saxophone even though his mother played piano.  He played in the Booker T. Washington High School band.  Music was a passion shared by all his friends – people like Huey “Piano” Smith, Lee Diamond, Sugar Boy Crawford, Big Boy Miles, and Danny White.  Whenever professional musicians like Fats Domino, Professor Longhair, or Dave Bartholomew needed musicians for a recording session or a gig, they would come to Parker’s neighborhood in search of him or his friends.

Parker was a regular patron at Professor Longhair’s Sunday evening sessions at the Caldonia Inn.  When Longhair needed a sax player for a Tuesday night show across the Mississippi in Gretna, he hired Parker.  That led to a 1949 recording session with the professor at which the first version of Mardi Gras in New Orleans was recorded.

Parker’s next job was a five-year stint as leader of the Tijuana Club’s house band.  He would walk out into the audience, playing, and would even lie on his back under the tables, playing all the while.  Though the Tijuana was a small club, it still attracted some top talent like Little Richard, Gatemouth Brown, Guitar Slim, and Bobby Marchan.  Marchan at the time was the club’s young emcee and was performing in drag, a common practice of the time.  Talent scouts were also regulars at the club, including Johnny Vincent of Specialty Records and Ace, a label he later founded in Jackson, Mississippi.  It was Vincent who discovered Guitar Slim at the club.  Dave Bartholomew of Imperial Records and Eddie Mesner of Aladdin Records also were Tijuana regulars. 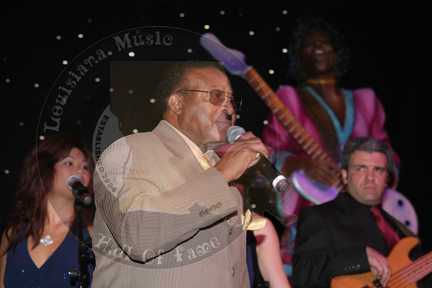 It was while working at the Tijuana that Parker signed with booking agent Percy Stovall and put together his own band, Robert Parker and the Royals.  They were hired to back Roy Brown, Big Joe Turner, Wynonie Harris, Solomon Burke, Charles Brown, and Amos Milburn.  Playing cities from Texas to Florida, band members made twenty-five dollars a night on the road and ten dollars a night when performing in New Orleans.  At the same time, he began getting calls for studio work from Chess and Specialty.

One of his first recording sessions was backing Huey “Piano” Smith on Don’t You Know Yoekamo and he joined Smith’s band, the Clowns for an extended tour.  He also played on Al Johnson’s recording of Carnival Time and Irma Thomas’s Don’t Mess with My Man, and for records by Johnny Adams, Chris Kenner, Ernie K-Doe, Fats Domino, Frankie Ford, Joe Tex, and Eddie Bo.  His first solo recording, courtesy of Ron Records A&R man Eddie Bo, was an upbeat song, All Night Long in 1959.  Parker had worked shows with Bo who in turn used Parker in studio recording sessions he produced.

Two things happened then that gave his career as a soloist a major boost.  Stovall booked Parker and his band for a show at Tuskegee University in Alabama.  When he started singing, the girls all took off their shoes and piled them in front of the bandstand, an otherwise inconsequential gesture that nevertheless stayed in the back of Parker’s mind.  The other event was a show he played in Miami.  A comedian opened the show with his two daughters.  When he came onstage, the comic would shout to the audience, “Everybody get on your feet; you make me nervous when you’re in your seat.”

When Parker started writing Barefootin’ that was his opening line.  When the song was completed he took it to Wardell Quezergue, the A&R man for NOLA Records but Quezergue’s partners didn’t like the song, so it remained unreleased for almost a year.  It probably would have remained unreleased had local deejay Hank Sample not heard the record in Sample owned a record store and liked what he heard.  He prevailed on NOLA executives to press some copies of the song and he placed the records on sale at his store and the song became an instant hit.

NOLA cut a deal with Cosimo Matassa who arranged for distribution through Dover Records and Barefootin’ began a steady climb up both the pop and R&B charts.  It peaked at number two on the R&B charts and number seven on the pop charts, remaining on the charts for seventeen weeks.  Parker, who had been supplementing his income as an orderly at Charity Hospital, quit his job and signed with the Queen’s Booking Agency which booked him into the Apollo Theater.

His first performance was less than inspiring but when he removed his shoes during the second show’s performance of his new hit song, the crowd went wild and after that, he would only perform the song shoeless while touring with the Marvelettes, the Temptations, the Four Tops, and Joe Tex.

The deal between NOLA and Dover would eventually sour.  NOLA owed Matassa $70,000 in studio costs when the IRS shut NOLA’s doors, leaving both Dover and Matassa holding the bag.  It also left Parker with a bitter taste in his mouth in the belief that some of the NOLA executives got greedy.  “I’m sure Barefootin’ sold over a million copies but I never got a gold record,” he told author Jeff Hannusch.

Parker soon found himself back in New Orleans playing in Clarence “Frogman” Henry’s band on Bourbon Street and doing oldies shows.  In 1983, Spic ‘n’ Span used Barefootin’ in a TV commercial and the song was re-released in England.  In 1994, he and his wife moved upriver to Sunshine in St. James Parish, where he began driving a school bus and in 1999, Harrah’s, the land based casino in New Orleans, used Where the Action Is, the flip side of Barefootin’, in its radio and television commercials.  Parker’s version of the song was not used, however, because the casino opted for a recording by Denham Spring’s Luther Kent.  Still, Parker garnered songwriting royalties from the song’s use.  He also performed several times at the New Orleans Jazz Fest.

On April 14, 2007 at the LMHOF “Legends Of Louisiana Celebration & Inductions” in Mandeville, Louisiana, Robert Parker was inducted into The Louisiana Music Hall Of Fame.