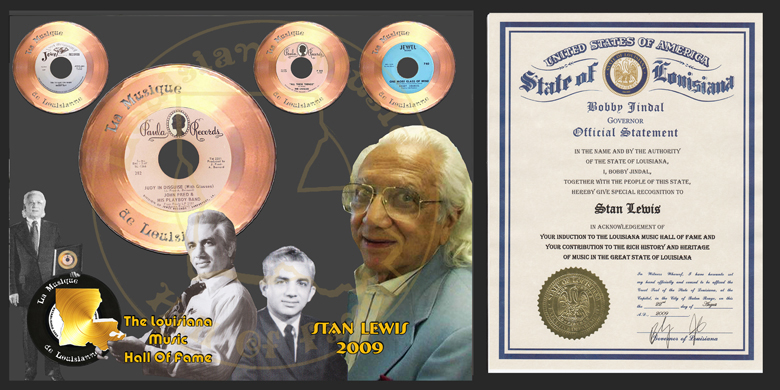 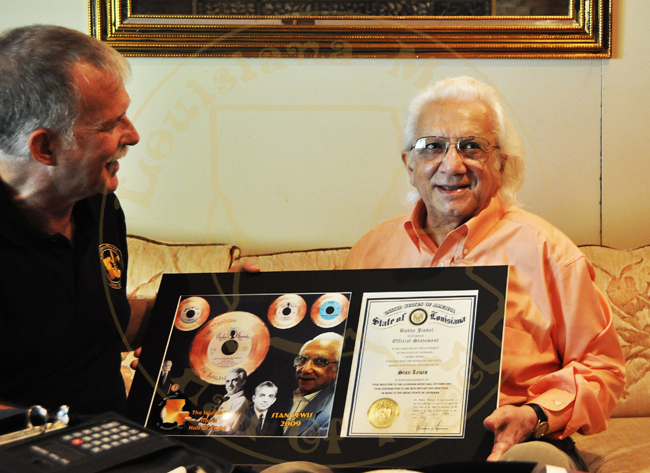 STAN LEWIS (b. July 5, 1927 – ): Stan Lewis was the southern distributor for Chess Records, owned two record labels, owned a record store, and advertised his records over several powerful radio stations that blanketed much of the South and Midwest with their signals.

Lewis opened Stan’s Record Shop in Shreveport on June 22, 1948, with money he’d earned selling newspapers.  At the age of 20, he became a pioneer in the music industry by setting up a unique national independent distribution network and advertising on 50,000-watt clear channel AM radio stations.  KWKH in Shreveport, KAAY in Little Rock, and WLAC in Nashville were his primary outlets and between them, they provided sufficient coverage to make him the South’s largest independent record distributor.  Besides Chess, the independent labels he represented included Atlantic, Checker, Modern, Specialty, and Imperial.  A frequent customer at his Texas Street store was Louisiana Hayride performer Elvis Presley, who held autograph sessions there.  Lewis, in turn, bought breakfast for a cash-strapped Elvis and his band on many occasions.

Lewis had the background needed to succeed in the recording industry, having worked with Leonard and Phil Chess at Chess Records in Chicago prior to moving back to Shreveport.  When Lewis started producing musical acts, Dale Hawkins brought him a tape he’d recorded in a $25 midnight session held in the KWKH studios after the station went off the air.  Susie Q was sent to Leonard Chess who released it on his label.  The song went to number 27 and was named by the Rock & Roll Hall of Fame as one of 500 Songs that Shaped Rock & Roll.

In 1963, Lewis founded the Jewel record label, naming it for a Chicago grocery store.  Founded to record R&B music, the roster included Big Joe turner, John Lee Hooker, Clifton Chenier, Charles Brown, Lowell Fulson, Ike & Tina Turner, Memphis Slim, and Lightnin’ Hopkins.  “When I was in Chicago, I used to drive past the Jewel Grocery Store on a regular basis and one day I told Leonard Chess, ‘That (Jewel) would be a good name for a record label,’” he said.

Stampley had been badgering Lewis to record him and Lewis referred him to Dale Hawkins, who auditioned him and signed him to a contract after Stampley sang Not Too Long Ago a cappella.  The song went to number 66 in April of 1965 and its follow-up, a cover of Art Neville’s All These Things, was number 97 in July 1966.  John Fred and the Playboys had a number 1 hit for Paula in January 1968 with the million-selling Judy In Disguise (With Glasses), a parody of the Beatles’ Lucy in the Sky With Diamonds.  Their follow-up, Hey Hey Bunny, went to number 57 pop in February 1968.  The Chicago group Magnum Force had a number 72 R&B hit on Paula with the dance song Cool Out in early 1985.

Tiring of the rigors of trying to run a competitive independent record label in a major-label dominated industry, Lewis decided to offer Jewel for sale while still retaining control of his music publishing companies.  Several major labels and music companies expressed interest and in 1999, EMusic.com purchased the master recording rights of the Jewel family of labels from Lewis.

“We had some wonderful talent in Louisiana back then,” he said, “and there’s still some great talent in this state.  I spent fifty years in the business and I’d do it all again although I really don’t see how anyone could repeat our success today, given what the recording industry has become,” he said.  “Everything’s a boardroom decision today and the small independents can’t force their way into the market the way they could forty or fifty years ago.”