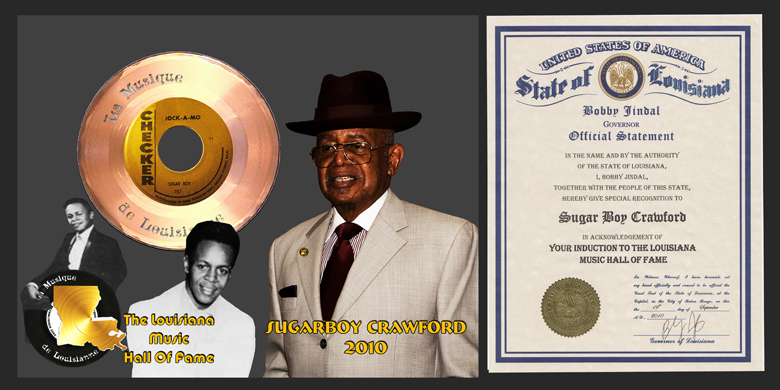 James “Sugar Boy” Crawford (born October 12, 1934) is a New Orleans R&B artist and the author of the classic “Jock-A-Mo” in 1954, a hit that was later recreated as “Iko Iko” by The Dixie Cups and many artists including Dr. John, Belle Stars, The Grateful Dead and Cyndi Lauper.

Starting out on trombone, he formed a band which local DJ Doctor Daddy-O named “The Chapaka Shawee” (Creole for “We Aren’t Raccoons”), the title of an instrumental they played. Signed on by Chess Records president Leonard Chess, the group was re-named “Sugar Boy and his Cane Cutters.”

SugarBoy recorded many tunes with Dave Bartholomew for Chess including “Morniing Star.”

Performing across South Louisiana, SugarBoy Crawford was a “singer’s singer,” one that other performers wanted to emulate, and was just as popular in Baton Rouge, LA as in New Orleans, with his Baton Rouge based hit of “Danny Boy.”

Although his song became a standard at the New Orleans Mardi Gras, Crawford himself disappeared from public view, and in a 2002 interview, told how his career came to an abrupt halt in 1963 after a severe beating which incapacitated him for two years, forcing him to leave the music business. In 1969, he decided to limit his singing in church only.

Crawford appeared on his grandson Davell Crawford’s 1995 CD Let Them Talk. He has since made some stage appearances with Davell as well including the one at the New Orleans Jazz & Heritage Festival in1996, and most recently at the 7th annual Ponderosa Stomp in April 2008.