Vince Vance (& The Valiants) is the premier country pop, rock and roll and musical show group from New Orleans, Louisiana, United States. Vince Vance, aka Andy Stone, is the last original member of the Valiants. He was born Andrew John Franichevich Jr. The group’s signature recording is “All I Want for Christmas Is You“,which charted on the Billboard Hot Country Songs charts on six separate occasions, ranked in the top ten Christmas songs for 20 years including #1 in requests for 18 years and is currently #5 in CMT’s Christmas favorites.

With Cool Costumes, Choreography and a 6 foot head of Vince himself, Vince & the Valiants have appeared in 13 countries and 34 states in the U.S. 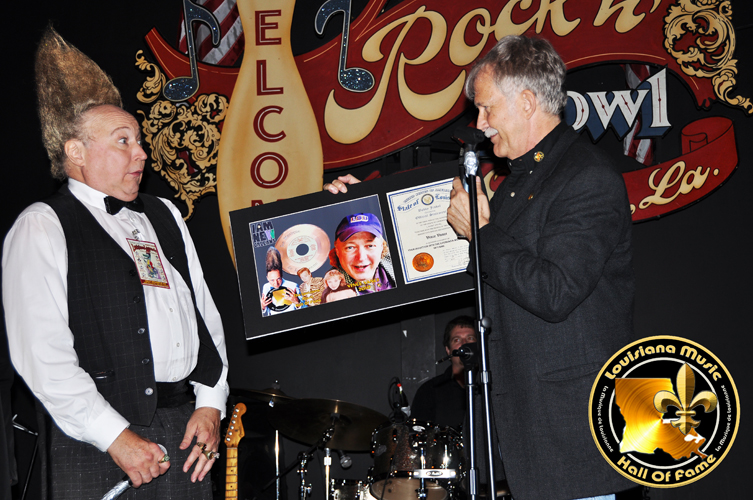 Vince apparently surprised by his Induction! 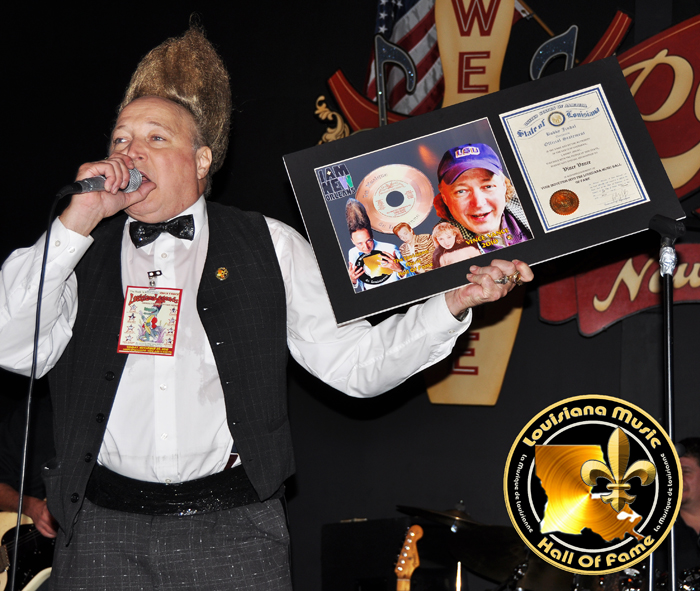 Vince’s own story in music starts with his graduation from Southeastern Louisiana University just North of Newe Orleans and culminates in his current ability to make audiences happy. When he left college, he recalls, he became band director at Donaldsonville High in Ascension Parish, near Baton Rouge.

“My girlfriend desperately wanted me to be a band leader and she’d teach second graders. It was her dream but it just wasn’t in the cards for me. Two years later, I was playing at Andy’s Nest, next to My Father’s Mustache in New Orleans,” says Vince.

One night, a group of guys from the Mustache came over to listen – amazed at his rock and roll stuff, they asked Vance to teach them.

“I taught a bunch of waiters how to be in a band,” he chuckles. “That was a fateful night and I have given up everything to keep doing this.”

His career blasted off and he says now his band has been together for almost 40 years, advancing through 50’s schtick to 70’s and 80’s costume rock to the ultimate party and show band.

Each show treats the audience an hour and a half of a crazy guy with 18 inch hair and 50 costume changes including a Christmas tree, a cop and Sponge Bob. “You can laugh and cry, enjoy it all and you will never forget the time you saw Vince Vance and the Valiants,” he proclaims, showing off the sparkling personality that has made him a star.

When he and his buddy Troy Powers sat sweltering in Pennsylvania heat wave 20 years ago, thinking of ways to keep cool, they penned a Christmas song, never dreaming it would be the most requested Christmas song for two decades. It is, he says simply, a song about every kind of love. He feels it has stood against time, as he has, because each listener hears it a different way. If you need the feel of Christmas, anytime of year, find Vance’s show.

Vince’s career includes 13 albums and over 20 singles. Vince Vance’s current music video, I am New Orleans, is a musical collage of sights and sounds of the city released for the fifth anniversary of Hurricane Katrina and honors the city and showcases its beauty and its uniqueness.

On Sunday, November 20, 2010, Vince Vance was surprised during his performance at a “Louisiana Legends” fundraiser at New Orleans Rock’n Bowl venue, with induction into The Louisiana Music Hall Of Fame for his outstanding career, including the Christmas icon “All I Want for Christmas is You” and his most current “I Am New Orleans.”

More info on Vince Vance is available at http://www.vincevance.biz/.