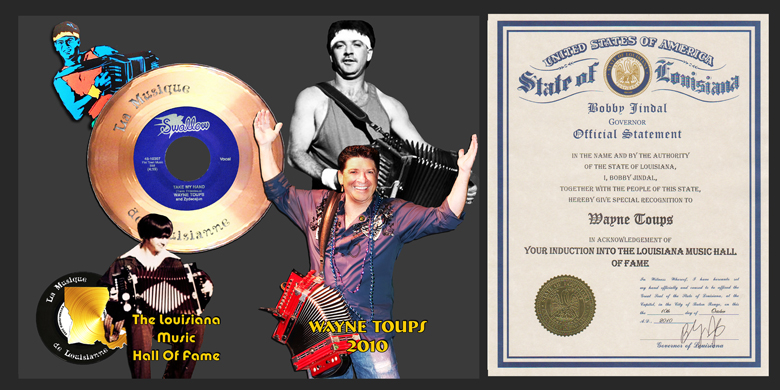 If there anyone who can challenge Doug Kershaw for the title of Cajun Music Ambassador to the World, it would be accordionist and vocalist Wayne Toups.   He was born on October 2, 1958, in Lafayette and grew up in Crowley.  A progressive Cajun musician, he created a popular new sound by combining Cajun and zydeco elements with mainstream rock sounds (including English lyrics); he called the style Zydecajun.  One of the most commercially successful Cajun artists, Toups has recorded for the major Polygram label, and his albums include Zydecajun (1986), Johnnie Can’t Dance (1988), Blast from the Bayou (1989), Fish out of Water (1991), and Back to the Bayou (1995), and Little Wooden Box (2000).  Among his most popular recordings are Two Step Mamou and Sweet Joline, Oh, Louisiana, That’s What I Love About My Baby, La Bague Qui Brille (The Ring that Shines), Les Filles de la Ville (New Orleans Ladies), and his most famous song, Take My Hand.  Toups has toured in over twenty-six countries. 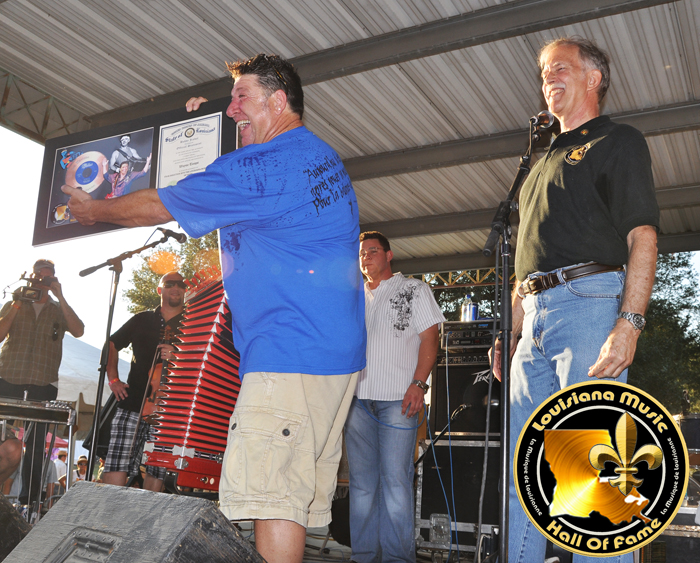 He began his recording career in J.D. Miller’s recording studio in Crowley when he was only about ten years of age and Miller’s son Mark, who now runs the studio, has produced several of his albums.

Toups lists as his musical influences R&B stars Otis Redding and Aretha Franklin, as well as rockers like the Allman Brothers and the Doobie Brothers, adding them to his own unique musical gumbo that has won him a huge following of zydeco converts.  He tours almost constantly with festival and television appearances making him one of the most visible musicians of his genre.

His work can be heard on soundtracks for television (Broken Badges) and the movies (Steel Magnolias). He has backed many singers, including Mark Chestnutt, Clay Walker, Garth Brooks, Sammy Kershaw, and Alan Jackson.  Certainly one of the most exciting musicians to come out of Acadiana in many years, Toups bursts full throttle onto the stage with his accordion.  His electrifying – and energizing – presence is fed by his persona.  Often clad in a Hawaiian shirt, he is in perpetual motion onstage as he melds the bluesy sounds of zydeco, traditional Cajun, and gyrating rock & roll.

More info on Wayne Toups is available at www.waynetoups.com.