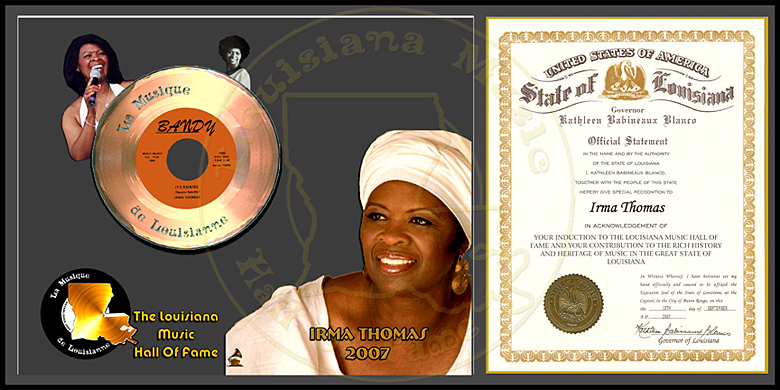 Irma Thomas, like Fats Domino, Aaron and Art Neville, and thousands of other New Orleanians, lost all her possessions

in the aftermath of Hurricane Katrina when the levees breached, flooding much of the Crescent City.  But she didn’t take

long to start a new collection.  Like Aaron Neville, she was not in town at the time.  Neville was in New York and Thomas

was performing at Antone’s in Austin, Texas.  Because her whereabouts were unknown when the storm hit, she, like Fats

Domino, was initially reported as missing.  Domino was rescued by boat from his flooded 9th Ward home and in due course, 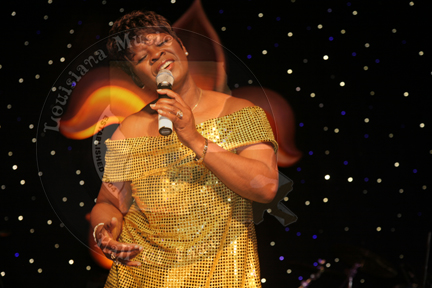 Watching the storm’s carnage on television in Austin, Thomas and her manager-husband, Emile Jackson, were devastated to

“you know we don’t have no home.”  Antone’s management, realizing she wasn’t leaving Austin for the time being,

invited her to play an additional night.  The following day, she and Jackson flew to Alexandria and drove to Baton

Rouge and eventually settled in Gonzales, a city on I-10 between Baton Rouge and New Orleans while her New Orleans

home was undergoing renovations.  In March 2007, she was still working to get her home ready for occupancy.  “I’d already

be in it if they’d hurry up and get it paint,” she said.  The house, built in the ‘70s, has no central drain in the bathroom,

creating logistic problems in installing a pre-fabricated shower.  “We’re working on it, though,” she said.

Soon after moving in with her husband’s aunt in Gonzales, she notified a friend by e-mail that she was safe.  “I am doing

okay for now,” she said, “but I don’t know how long it will be before I can get help from FEMA.  Thanks for being

concerned.  Tell all of my fans I thank them.”

She performed benefits for Katrina victims with Bruce Springsteen, Elvis Costello, and Dr. John.  She sang with Bonnie Raitt

She was born Irma Lee on February 18, 1941, in Ponchatoula, a city in Tangipahoa Parish, about an hour northwest

of New Orleans.  She lived for a time with her father’s family in Greensburg in adjacent St. Helena Parish before moving

with her parents to New Orleans.  Pregnant at age 14 and forced to marry the child’s father, she soon had a second

baby before the marriage disintegrated.  With a failed marriage and two children at age 16, she started waiting tables at

what would later become the Pimlico Club on the corner of South Broad and Eve Street.   At 17, she met Andrew

Thomas whom she married and two more children followed – all before she was 20.

When that marriage also failed, she kept the name Thomas.  Meanwhile, she was gaining a reputation as a talented singer

while sitting in with Tommy Ridgley & the Untouchables at the club.  Originally, the club catered to whites and blacks –

with separate entrances.  The whites entered from the front and the blacks from the rear of the building.  Finally, it was

converted into what in those days was called a “colored’” club.  Now the Pimlico Club, it began offering live entertainment

patrons started asking for the “singing waitress,” and that upset her boss, who felt he was paying her to be a waitress, not an entertainer.

When she was fired for her singing, Ridgley immediately took her to Ron Records where she cut her first record, You

May of 1960.  A dispute over royalties ensued and she signed with Minit Records where she worked with Allen Toussaint,

recording It’s Raining, Ruler of My Heart, and I Done Got Over.

Otis Redding, while in New Orleans, heard her sing Ruler of My Heart, re-worked the lyrics slightly and released

his own version, Pain in My Heart, which reached number 11 on the Billboard R&B chart in November of 1963 and

Would Care, b/w Breakaway (the latter written by Jackie DeShannon and Sharon Sheeley), which climbed to number 17.

She said she was at a low point in her life when she wrote I Wish Someone Would Care.  “It was the only song I wrote

myself,” she said.  Her second marriage was coming apart over her husband’s objections to her pursuing a singing career.

“It was a song from my heart,” she told author Jeff Hannusch.  “That’s probably why it sold so well.  I really wanted

someone to care, to stand beside me and care.”

In December 1964, the Rolling Stones had a number six hit when they covered Time Is on My Side, a song she first recorded.

The song recently surfaced on a television ad for Slim Fast diet drink, but was sung by neither Irma Thomas nor the Stones.

“If they’d used my version, I would’ve collected royalties, but they used some generic version,” she said.  Arguably,

one of her best recordings was a cover of Nat King Cole’s sentimental Looking Back, a song that never even charted.

Her career took a downward turn during her tenures with Imperial and Chess records and in January 1970, in the aftermath

of 1969’s Hurricane Camille, she moved to California, first to Oakland and then to Los Angeles.  She sold auto parts for

Montgomery Ward in both cities during the day and took night club gigs when and where she could.  She also recorded

In 1976, she moved back to New Orleans and to her surprise, found that she was still popular in her home town as a live

performer.  “When I left New Orleans, I couldn’t get a gig.  Things changed over time and she finally decided to come home

“because I was working more in New Orleans than L.A.,” she said.  The following year she married Jackson who took

over as her manager and she became a regular performer at the New Orleans Jazz and Heritage Festival.

She and Jackson set about rejuvenating her career, even opening a nightclub, the Lion’s Den, on Gravier Street near Broad.

Essence Music Festival.  She has toured in Japan, Germany, Switzerland, France, The Netherlands, Italy, and Greece.

The Lion’s Den was one of those suffering damage from Katrina and she said she has no plans to re-open.

She won a pair of W.C. Handy awards even though she didn’t know she had been nominated either time – she considers

herself an R&B singer, not blues in the classic sense – and she received two Grammy nominations in contemporary

blues.  All those awards were lost in the Katrina flooding but Thomas refuses to be a victim.  “I felt the loss,” she said,

“but I’ve never been very materialistic.  I like my things.  Every woman does.  But if it’s lost, so be it and that’s the way

I feel about the things I lost in Katrina.  I’m still alive and I can make more music.”

More music indeed.  Recorded at the Dockside Studio in Maurice, Louisiana only months after Katrina, After the Rain

would seem to be a requiem for victims of the devastating hurricane.  Actually, the songs for the album were selected

before Katrina nevertheless she won her only Grammy in 2007 for Best Contemporary Blues Album.  Featured on the

the Grammy was vintage Irma.  “First of all, I want to say thank you, God,” she said.  “And thank you, New Orleans.

Forty-nine years you believed in me and it finally paid off.”

A non-drinker and non-smoker, Thomas has one firm rule for her band: no drinking “because whenever something

happens, you’re representing me.  I don’t indulge in any kind of things that’s gonna make me not be clear-headed

when I’m performing.  I don’t drink, I don’t smoke, I don’t do any kind of drugs and these are the kind of musicians

I want,” she said.  “Otherwise, I don’t need them.”  Her only apparent vice manifested itself minutes before a Baton Rouge

performance in March of 2007 when she requested a cup of hot water – “hot like coffee, if you don’t mind, dear” –

and Splenda, flavored with lemon.

She performed at a 1999 memorial for Tommy Ridgley at Tipitina’s, an event that held special meaning for her.  “He was

the wind beneath my wings,” she said.  “He goes back to my beginning and I feel good that I was able to express my

gratitude.  If he hadn’t brought me to the places where the talent could be heard, I could be washing dishes or waiting

tables.”  A high school dropout, Irma obtained her GED and, defying all odds, began a successful pursuit of a college

degree in business.  Even with a college degree, a pair of W.C. Handy Awards, a Grammy, and recognition as the Soul

Queen of New Orleans, she doesn’t consider herself special.  I’m just Irma,” she said, “and you either like what you see,

or you don’t like what you see.  Every day I wake up and I’m still alive, thank God.”

female vocalists around after whom to style herself, but she did learn from New Orleans native Mahalia Jackson and Pearl Bailey.

Other influences included John Lee Hooker and Lowell Fulson.  “If someone had told me when I was six years old, in the

middle of the strawberry patch, dancing and singing Boogie Chillen, that I’d ever be on the same stage with John Lee

Hooker!” she said.  I’m not in awe of very many people, but I was in awe of him.  I really consider myself blessed

because I never thought I would be sharing a stage with these people.

Asked if she would do anything differently in her life if given the chance, her answer was both quick and somewhat

surprising in that she didn’t consider her personal life as many people would when responding to such a question.

“Career-wise, I would have gotten better management,” she said.  “Rock and Roll was still in its infancy back then and

there were a lot of unsophisticated performers who didn’t know how to take care of themselves.  At the same, there were

a lot of smooth operators just waiting to prey on us.  A lot of artists lost a lot of money to record companies, managers,

and booking agents.”  Still, just as with Katrina, she refuses to be a victim or to change.  “Whenever my body says slow down,

I will.  Until that time, I have no plans to stop.

On April 14, 2007 at the LMHOF “Legends Of Louisiana Celebration & Inductions” concert in Mandeville, Louisiana,

Irma Thomas was inducted into The Louisiana Music Hall Of Fame.