In 1958, Joe Banashak and WMRY program director Larry McKinley teamed up to start a record label, Minit Records.  Each man put up $650, which was enough to pay for the cost of a recording session and to press a thousand records.  Banashak also owned A-1 Distributors, giving him a built-in advantage.  He could sell A-1 a thousand records and A-1 would issue an immediate check to the new record label so that the partners would have the financial resources to pay for their next project.  The arrangement allowed them to circumvent the usual procedure of waiting months for the distributor to pay.  Banashak chose Minit as the name of his new label after passing a restaurant called Meal a Minit.

Another built-in advantage was having McKinley, the leading deejay in New Orleans, as his business partner.  Banashak knew McKinley would play their records, which was crucial to the success or failure of a new release.  McKinley was also Ernie K-Doe’s manager and was in search of a record deal, which made the timing right.

McKinley was one of those radio personalities who could make a record with his on-air endorsement or break it simply by refusing to play it.  An example of his power in the radio business was when Atlantic Records almost went under at one point.  Banashak, heavy into blues, was one of their best customers at the time.  Atlantic made six different versions of What’d I Say by Ray Charles.  The plan was to see which version would get the most public reaction so that they could decide which one to release.  One dub was sent to Banashak who told McKinley that he had the only copy of that particular version.  The day after giving the record to McKinley, Banashak attended a record convention in Chicago.  While there, he received a call from his wife saying people were screaming for the record that the New Orleans deejay was playing.  Banashak was gone for only three days, but upon his return he found a back order of 25,000 records.  Atlantic accordingly decided to go with the version that McKinley had been playing. 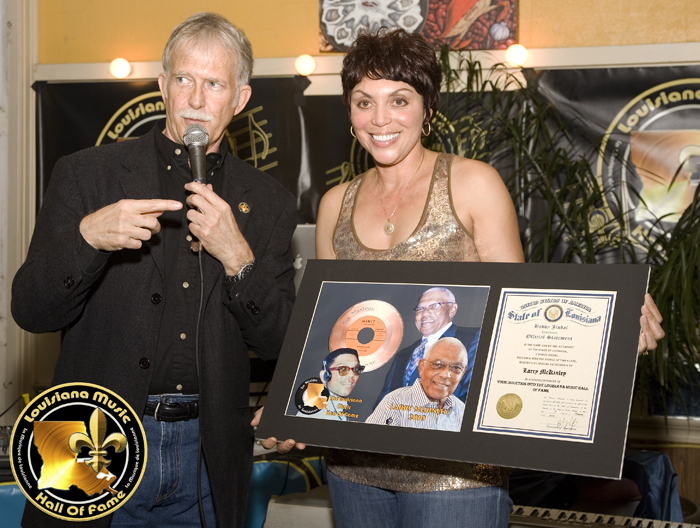 Banashak and McKinley arranged for talent auditions for their new record label at the WYLD studios in January of 1960 and the auditions produced some of the finest musical talent to gather at one time in New Orleans.  Jessie Hill brought a tape to the auditions that would barely play because it was full of splices and in such poor shape.  It turned out to be Ooh-Poo-Pah-Doo.  Among the other hopefuls were such future luminaries as Irma Thomas, Benny Spellman, Aaron Neville, Lee Diamond, and Joe Tex.  Another singer brought his own piano accompanist, Allen Toussaint.  Though K-Doe was not part of the audition because he was already being managed by McKinley, he and the others, with the exception of Irma Thomas, were all signed the next day.  Tommy Ridgley was recording for Joe Ruffino at the time and he took Thomas to Ruffino who signed her when he learned Banashak was interested in her.  Banashak learned that Joe Tex also had contracts with Johnny Vincent of Ace Records in Jackson, Mississippi and with Leonard Chess of Chess Records in Chicago.  Not wanting any legal problems, Banashak tore up his contract with Tex, who released his next record on Ace.

The coup was the signing of Toussaint, the shy pianist who would become Minit’s arranger and producer.  Toussaint directed Minit’s recording sessions, wrote most of the songs, and made sure that the musicians played the way the arrangements were written.  Most session musicians got $55 each and background singers $30 each for sessions.  Toussaint received $107 as arranger and leader of the sessions, double the prevailing union scale.  Minit’s first big hit was Hill’s Ooh-Poo-Pah-Doo, which remained on the  R&B charts for eleven weeks during 1960 and even crossed over to reach number 28 during its sixteen-week tenure on Billboard’s Hot 100, eventually selling 500,000 copies and getting Hill a gold record in the process.

It would be K-Doe, however, who would give Minit its greatest success the following year with his smash hit Mother-In-Law.  Benny Spellman’s melodic baritone provided the lead-in, “Mother-in-law,” followed by K-Doe’s, “The worst person I know…”  Cosimo Matassa laughed many years later as he reflected on Spellman’s contribution to the song.  “For the longest time, Benny would dog K-Doe, joking that he should be paid royalties because he made the song a hit,” he said.  It wasn’t always a joke, however.  Once, Banashak and McKinley had to break up a fight between the two when they began arguing about who was responsible for the song’s success.

Banashak said he knew the song would be a hit and he was right.  It went to number one in both the white and black markets.  “People who didn’t normally purchase records bought it because they wanted to play it for their mother-in-law,” he said.

The news wasn’t all good for Banashak, however.  When the record went gold, Billboard ran a photo of Lew Chudd giving the award to a disc jockey on the West Coast in gratitude for breaking the record.  Everyone involved, including Chudd, knew it was the New Orleans deejays that broke Mother-In-Law.  McKinley, after all, was K-Doe’s manager and a partner in Minit Records, so it followed that he would have been the first to play the song.  It created an awkward situation for Banashak who was caught in the middle between his distributor and former boss, Lew Chudd, and irate New Orleans deejays who were justifiably upset for not getting the credit that was their due.

The distribution deal with Chudd eventually soured, undoubtedly spurred on by the Mother-In-Law gold record incident.  Before long, Banashak was looking at starting yet another record label, this time with McKinley and a new partner.  Irving Smith ran a successful record shop on St. Charles Avenue and he approached Banashak, who agreed to put up the necessary money and allow Smith to run the day-to-day operations.

Chris Kenner was signed to a recording contract and his song I Like It Like That was released on the new Valiant label.  Banashak and Smith received a letter from a record label in California that was already using Valiant, so they changed the name of their record label to Instant.  Instant’s success was aided by the decision to bring Toussaint over from Minit to produce its recording sessions as well.  During a single month in 1961, Toussaint had seven of his songs on the charts, though they weren’t all on the Minit or Instant labels.

McKinley was given a one-third ownership in Instant because of his importance to the label as a radio personality but the arrangement was short-lived.  The payola scandal that would eventually destroy Alan Freed’s career was rocking the recording industry at the time.  Payola was as prevalent in New Orleans as anywhere else and Banashak and Smith must have known a disc jockey’s financial interest in a record company would attract unwanted attention from federal investigators.  They attempted to conceal McKinley’s involvement with Instant Records by putting the shares in his wife’s name, but when McKinley’s boss confronted him after being tipped off by one of Instant’s competitors, the deejay was forced to divest his interests in the record label.

When I Like It Like That hit, Banashak received a call from an irate Lew Chudd who wanted to know what was going on.  Banashak told Chudd that he hadn’t lived up to his promise to promote Minit records and he had decided to go out on his own.  The record sold half a million copies in just three months, receiving a gold record.  Banashak would later claim that Instant lost only three percent of the money due from distributors who didn’t pay.  Banashak continued his efforts on behalf of Minit Records and the label’s string of hits continued.  K-Doe followed Mother-In-Law with Popeye Joe, I Have Cried My Last Tear, A Certain Girl, and Te-Ta-Te-Ta-Ta.  Benny Spellman had a two-sided hit with Lipstick Traces and Fortune Teller, which reached number 80.