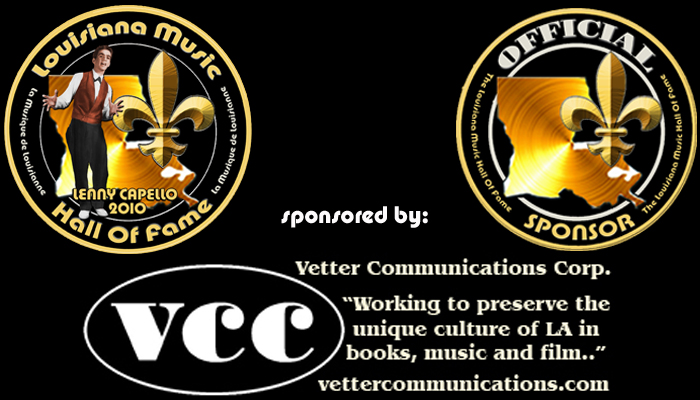 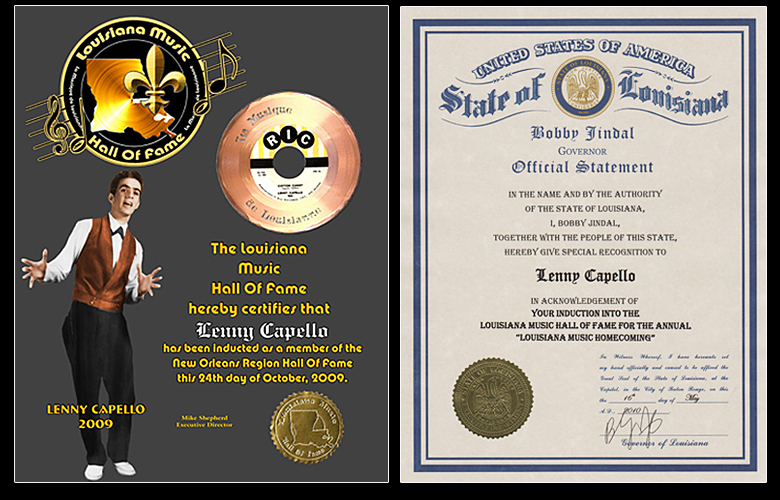 Born Leonard Arthur Capello Jr., in New Orleans, Louisiana on September 22, 1942, Lenny Capello has traveled a road similar to that of many rock and roll pioneers of the fifties. He has achieved successes in a music business that slams more than rewards, in a time was the music business itself was "under construction," with new forms of music was in infancy. Louisiana in the fifties, as always, had over abundant talent and creativity in music. Rock and Roll was in its first decade, Swamp Pop was just over the horizon and no one was sure where the merger of Blues,  R&B, Rockabilly, Country and Swing was going to wind up. Guitars, or pianos, or horns, which was the way, or what was the mix?

In 1952, Lenny was hooked on music when he was given a Sears Gene Autry Harmony guitar. He never mastered that guitar. Later that year, his family moved to Baton Rouge, Louisiana and Lenny began guitar lessons, on a more playable guitar and shortly thereafter made his performing debut on Bruce Broussard's Old Country Show from WJBO radio.

For a few years, Lenny's attention turned to baseball until one day, as he passed O'Neill's Music, he saw a Fender guitar in the window. It was just like the one the guitar player on Lawrence Welk's TV show played. He knew it was the right one because he had never seen another guitar with "all the string gears on one side of the head." Then, hearing the Charms' Hearts Made of Stone on the radio really got his attention. "I never thought of being able to sing the same word over and over." Lenny's attention again began focusing on music and the guitar.

In 1957, Lenny played his first paying gig with his cousin on the West Bank at the Plaquemine Youth Center with the Newcomers, a band from the Donaldsonville/White Castle area. Lenny's cousin was ill and asked Lenny to alternate the singing with him and split the $10 pay. This lasted for several weeks, then Lenny became one singer too many. 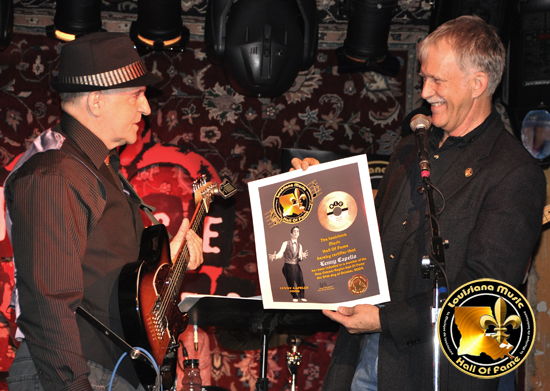 By 1958, the Dots had decided that, in order to grow and get better gigs, they needed to have a 45. They needed to have a song on the radio. On January 30, 1958, the quest began with fifteen year old Lenny's first recording with The Dots made in a local office (studio?). After first producing a tape that no one could play, a transfer to disc resulted in a "record" that played inside to out, and not at 45 rpm. An overall failure.

Shortly after, WLCS radio in Baton Rouge assured the teens that the station could, in fact, record them properly, and the record "would have a large center hole and play at 45 rpm." The resulting  Keep Pretending  quickly became a #1 hit... in White Castle, Louisiana. The only problem was that nobody in the band knew that they should press copies for sale. This was all new to them. The White Castle radio station was swamped by callers wanting to know where to buy the record, but only 5 had been made. An artistic success.

In the spring, following unsuccessful attempts to produce a 45 RPM record in Baton Rouge, Lenny hit the road to Natchez, Mississippi. Baton Rouge High School classmate Johnny Ramistella (Rivers) had released a 45, and it had the address of a record company in Natchez printed on the label. At last, a path. After finding that the company wasn't interested at that time, Lenny headed for his home town of New Orleans where the big record companies offices were.

Visiting the Baronne Street offices of RCA, then Capitol Records, he was informed that these were "distribution" offices, and didn't record or produce records in-house. Lenny was sent down the street to a group of music producers including Joe Caronna and Joe Ruffino, who sent him to Cosimo Matassa's J&M Music recording studio. Like so many other artists since the late ‘40's, Lenny had found the place. Finally, progress.

What followed was a disastrous attempt by the Dots at recording their songs. As he explains, "Everyone was frowning, and Cosimo asked if we had anything else, any more songs to try. So drummer Pat Waller and I played a song that only the two of us had been fooling around with, and everybody started smiling." The song was Cotton Candy.

A week later, only Leonard was called back to record with "experienced studio musicians." In order to see his, and the Dots, dream be realized, Lenny agreed. When he arrived, Cosimo introduced him to his studio group for the session: drummer Charles “Hungry” Williams, bassist Frank Fields, Huey “Piano” Smith, with Alvin "Red" Tyler and Robert Parker on saxes. That day, Lenny was to record two songs, Frankie Ford, two songs and Huey "Piano" Smith, four songs. During that session Cotton Candy was born and Tootles was revived. Lenny, and the Dots, were going to finally get a 45!

In August of 1958, while performing on Teen Tempo, a Jackson, Mississippi TV show, Lenny got a call from Ace Records' Johnny Vincent, who now "owned" the Cosimo's master recording, and had split with Joe Ruffino, with whom Lenny had signed a management agreement with. Ace Records and Johnny Vincent had also just acquired Lenny's Baton Rouge High upperclassman Jimmy Clanton. Vincent informed Lenny that his record wouldn't be released because of the split with Ruffino. After driving home and talking with his parents about the situation, the sixteen year-old called Ruffino who said, "Don't worry kid, I'm going to get this $#*! straight, this week." After a couple of weeks, Ruffino called and told Lenny that the situation was fixed and that he was now the first artist on Ruffino's new label, "RIC" Records.

For weeks Lenny visited Bert's Records looking for Ruffino's new RIC label. On one visit he finally found a 45 on the new RIC label, but, it was Lena by Al Johnson. A few weeks later, in November of 1958, Lenny returned home from school and was greeted by his Mother with a cardboard box that came by mail. It was 25 copies of RIC Records #960, Cotton Candy b/w Tootles by "Lenny Capello and the Dots." Almost a year had passed since the quest began.Before  Cotton Candy,

Lenny had always been known as "Leonard," and Ruffino had advised Leonard that he'd probably have to change his name for the record label. "I was expecting something like Frankie Ford, where they had changed his last name, Guzzo, to Ford, and I was surprised that Capello had survived but Leonard had become Lenny." His second, more pleasant, surprise, was that the name of the Dots had been retained on the record's label. Since the record was meant to be a Dots project and his band mates were friends, this meant a lot to Lenny. This also marked the beginning of a good time for "Lenny Capello and the Dots," with more gigs, better gigs, better pay and a 45 record on the radio. Success!

In 1960, two new songs were recorded at Cosimo's, Sadie (My Lady) and She Moves. Again, Lenny was the only of the Dots involved. He arrived at Cosimo's to find that his two new songs' tracks had already been completed by producer/pianist/guitarist Mac "Dr. John" Rebennack, and he had only laid down the vocal tracks for RIC #960.

Again in 1961, two more of Lenny's songs, a remake of his White Castle #1 hit Keep Pretending and The Love You Save were recorded at Cosimo's, this time with Mac Rebennack on bass, Allen Toussaint on piano and arrangements from Harold Battiste. Unlike 1960, the tracks were completed, with Lenny's "pilot" vocals. The production was never completed to fully implement Battiste's arrangements, and the songs were never released.

In late 1961 and early 1962, four more Lenny Capello songs were recorded with the Dots at Werlein's Music Studio in Baton Rouge, The Wrong Side of Town, Why Deny, Pickin' Cotton Candy (originally titled My Ugly Little Girl) and Beware Silly Girl. These also were never released by RIC. The songs, for the most part, were taking a different twist and more closely resemble the early songs of Paul McCartney and other later British writers.

Later in 1962, Lenny again returned to Cosimo's, this time with the current Dots which included Cyril Vetter and Harold Cowart. Four songs were recorded, but only two were released. Lenny's 90 Pound Weakling and Geneveve became RIC #991, while Your Bark is Worse Than Your Bite and You're Not So Hot remained committed to studio tape only.

Also recorded at Cosimo's in 1962 was Double Shot of My Baby's Love for Baton Rouge artist Dick Holler and the Holidays for Comet Records. The backing vocals included the song's writers Cyril Vetter and Don Smith and Lenny. In the final mix, Lenny's high vocal stood out over Dick Holler's and it became assumed that Lenny's part was the "lead." The Swingin’ Medallions certainly thought so. Their 1966 Top Twenty hit of Double Shot featured Lenny's part as the lead vocal. "I guess I sang louder than Dick," says Lenny.

As both the business and style of music changed, Lenny retired, at least the name “Lenny Capello” was retired in the music business. Lenny re-enrolled at LSU, studying music education as a violin major, and began teaching guitar for Werlein's Music. Having always been a writer (Half a Crown for Frankie Ford in 1959), after encouragement from New Orleans Dee Jay and producer Bob Robin, Lenny began writing with Baton Rouge's Rocky Saxon in 1968.

Later that year, Lenny again went into the studio as an artist. The first new song recorded was his Take A Message to Seymour, recorded in Tracy Borges' Metairie Studio by "Billy Shears and the All Americans," and released as Silver Fox #711, with Lenny on lead vocal.

Taking the name of his son, Damon, Lenny returned in 1970 as "Lenny Damon and the Bah Humbug Band" on four Capello/Saxon songs, Tippicaw Calley, Sookie Mama, Bourree Man and The Isle of Tagodiego, for Jubilee Records. The most successful was Tippicaw Calley (Jubilee #5688), reaching 119 in Billboard's “Bubbling Under the Hot 100” chart.  Two more unreleased 1970 songs, Louisiana Loser and Knockin' World, were also recorded at Bill Triche's Capitol City Sound in Baton Rouge by Bah Humbug, as was the unreleased Better World, in 1969, originally for singer Lee Tillman.

In 2007, Lenny became the "leader" of the LMHOF band for The Louisiana Music Hall Of Fame, and, in 2009, Lenny Capello was inducted into The Louisiana Music Hall of Fame, as were the Dots in 2010. With new inspiration, in 2010, Lenny completed a "writer's cut" of  Half A Crown, originally written for Frankie Ford and Christmas Time, with Joe Miceli, as a "completion" of Harold Battiste's arrangement and Cosimo's 1961 base track.Lenny Capello has never stopped teaching guitar, writing or performing. 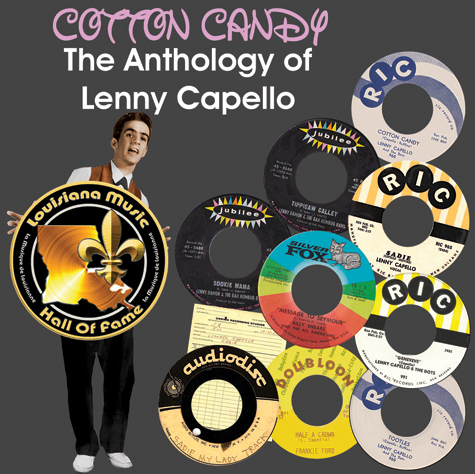 Today, Lenny's recordings of Cotton Candy, Tootles and 90 Pound Weakling remain popular on oldies compilations worldwide. Curiously, they seem to appear on CDs with titles like Wild Negro Bluz (Germany) and  Black Rock'n'Roll Volume 2 - Savage Kick (England). But, Lenny Capello isn't the first Louisiana artist that apparently sounded African-American to some. The classic case is the late Bobby Charles who often told how, upon first meeting him in person, his own label, Chess Records, accused him of not being Bobby Charles...because he was white! 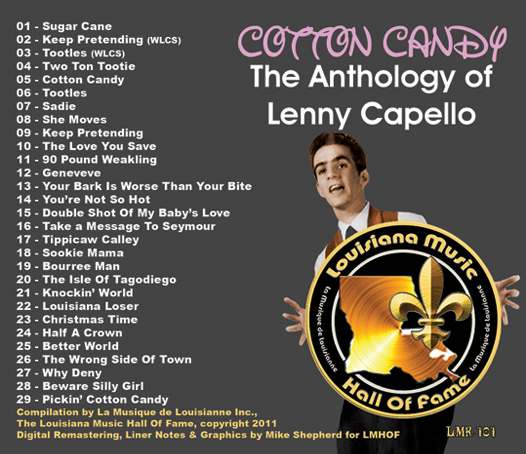 A part of the mission of La Musique de Louisianne Inc., The Louisiana Music Hall Of Fame, is to preserve and present, not only the history of our artists, but their music as well. Lenny Capello is one of those artists whose story has never been told, and who has quite a number of unreleased tracks that carry a story of Louisiana's musical history.

Biography by Mike Shepherd. Please visit the Galleries Musique Virtual Multimedia Museum for more on Lenny Capello and all of the members of The Louisiana Music Hall Of Fame.