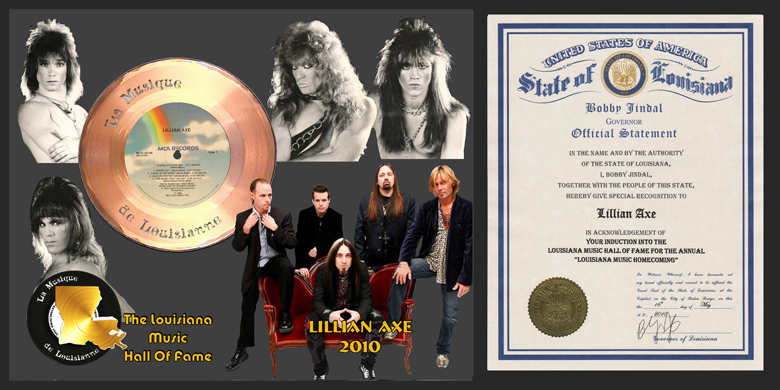 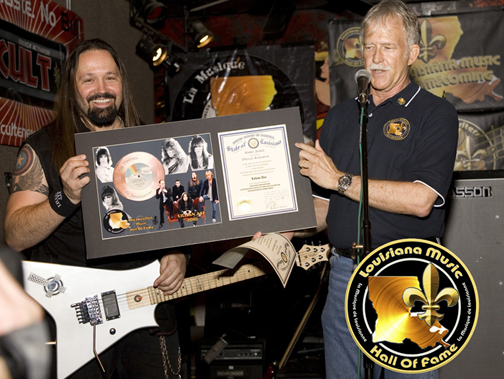 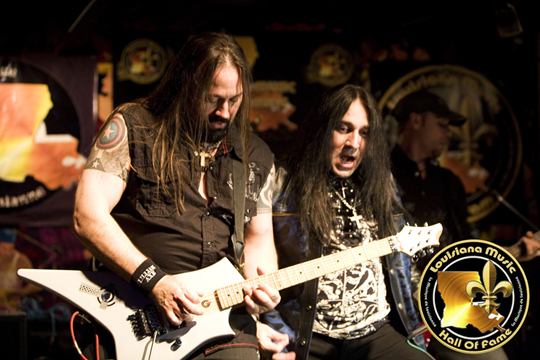 From humble beginnings in 1983, the New Orleans-based hard rock act rose above the cream of the bands touring the southern U.S. club circuit. Within three years, the band’s live show had built a reputation that was becoming legendary throughout the south. While opening with Ratt, Poison and Queensryche, the guys caught the eye of MCA Records executive Irving Azoff and also Marshall Berle (nephew of Milton Berle). Irving Azoff immediately signed Lillian Axe to MCA Records.

In August of 1987, guitarist, Steve Blaze and drummer Danny King of Lillian Axe joined forces with vocalist Ron Taylor, guitarist Jon Ster and bassist Rob Stratton of another regional touring band, Stiff. One month later a deal with MCA Records was in the can, and in April of 1988, the band’s self-titled debut album was released. Spawning the MTV and radio hit, “Dream Of A Lifetime”, the band hit the touring trail.

April of 1991 found Lillian Axe with a new bassist, Darrin DeLatte, a new drummer, Gene Barnett and a new home with Grand Slamm/IRS Records. After releasing a successful compilation record of the first two MCA records called “Out of the Darkness Into the Light”, Lillian Axe unleashed their most successful album to date, Poetic Justice in 1992. Fueled by the hit single, “True Believer,” Poetic Justice reached the top 100 Billboard album chart and True Believer hit number 37 with a “bullet” on radio’s R&R charts, and Lillian Axe was well on their way to finally becoming a well deserved success story.

Spending 1992 on the road, the band criss-crossed the states and got to meet their European fans by playing shows in the England, Wales, Scotland, France, Belgium, Holland and Germany.

Spring of ’93 saw Lillian Axe back in the studio with new drummer, Tommy Stewart (Godsmack) recording sessions for Psychoschizophrenia. Shortly after, the band once again found themselves in a tour bus. This time the tour would last for nearly three years including another tour of Europe.

By 1995 the band found themselves simply worn out. There was never a big “break-up,” the guys just took a break to do different things.

Before the decade ended, Z Records, an independent European label, and Pony Canyon Records, a Japanese label, put out a collection of unreleased Lillian Axe songs, Fields of Yesterday, culled from master tapes that had been waiting to surface. And, for the first time ever, their longtime Japanese fans would finally get their chance to experience live Lillian Axe in April of 2000.

In May 2002, Lillian Axe recorded a live CD in Houston, TX , which was released in August 2002with drummer Ken Koudelka and guitarist Sam Poitevent, followed by the “Lillian Axe: Live 2002” tour.

In Summer 2004 saw Lillian Axe return to Europe and for a more extensive European tour in 2005 with the introduction of new vocalist Derrick LeFevre.

Unfortunately Hurricane Katrina will hit the shores of Louisiana and devastated the New Orleans area destroying Lillian Axe’s rehearsal complex and all their equipment. Luckily, Lillian Axe had just started to record their first release with Derrick LeFevre and were able to save the recordings that had been started.

It took three years to finish “Waters Rising,” released in July 2007, followed by a support tour of the USA and Canada and an openiing act tour with Alice Cooper on his “Psychodrama” Tour. Steve Blaze was also voted by Guitar Player Magazine as one of the forty most underrated guitar players in the world.

Steve Blaze calls it, “They were the most intense recording sessions we have ever undertaken, but in the long run, I feel we are much stronger as a unit for putting in all the hours.” “The initial purpose and sound of this band has not changed since the early days, we just went with the flow, keeping our integrity as Lillian Axe” adds Blaze.