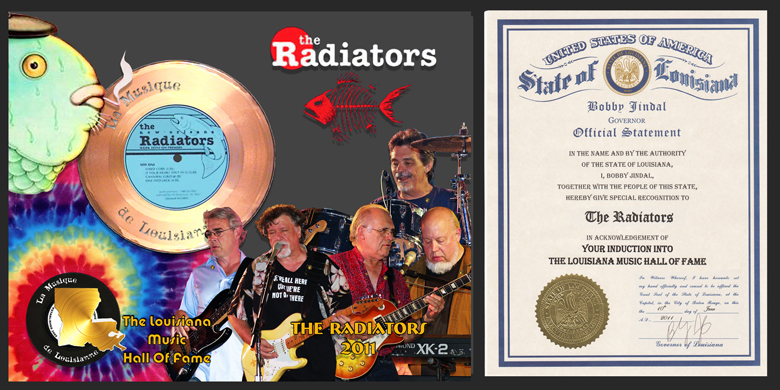 The Radiators LMHOF Induction at their farewell performance at Tipitina’s, June 10, 2011.

The Radiators, also known as the New Orleans Radiators, were born during a transitional decade in the history of New Orleans music. The Meters, the premier funk band, had disbanded, the Neville Brothers formed, and in 1980 Professor Longhair, the father of New Orleans R&B and spiritual embodiment of Crescent City Soul had passed on. This decade would prove to be the fertile period of development when a unique blend of rhythms and sounds came together and “Fish Head” music was born. The Radiators, an extremely eclectic group of musicians, rely on a myriad of musical influences to create their own sound – “Fish Head Music”. At a Radiators show it is not uncommon to hear blues, R&B, jazz, country, Zydeco, soul, swing, and even gospel filtering through their original New Orleans Rock N’ Roll.

The band formed in January 1978 in Keyboardist Ed Volker’s garage. Ed, Frank Bua, and Camille Baudoin were performing in one band together, with Dave Malone and Reggie Scanlan in another. “Ed invited us to come over to his house and jam; Dave and I figured we’d have a few beers together and play a couple of blues tunes,” remembers Scanlan, “instead, we jammed for five hours straight, then all quit our old bands the next day.”

Since that legendary first jam session, the Radiators have developed into a strong national act, a result of their marathon length live shows and a relentless touring schedule. The Radiators quickly became one of New Orleans’ hottest musical acts, then rose to national prominence as their fans spread the word across the country. In New York City, for example, crowds that started with transplanted Tulane University graduates dancing at the Lone Star Cafe steadily grew. This story has been echoed by similar ground swells rippling across the country.

This group could only come from New Orleans. Since its earliest settlement, the city developed a rich musical heritage that gave birth to 20th century American music. Musicians from this region were the first to incorporate African rhythms with Western melody. Beginning with culture-blending jam sessions at Congo Square, this musical tableau unfurled in the hands of artists such as JellyRoll Morton, Fats Domino, Professor Longhair, Allen Toussaint, Earl King, The Meters, Dr. John and others too numerous to mention. These acts provided great inspiration for the Radiators.

During their early years, the band members were able to watch and even play live with many of these local heroes. They combined these influences with the rising spirit of sixties rock and R&B to form a new, rhythm-intensive blend of rock and roll. After all, if you’re going to the party, you might as well bring something new, right?

Their reputation has been further augmented by a sizable body of recorded work – eleven albums released on labels including Epic/C.B.S. and Croaker Records. Aside from backing up such New Orleans legends as Dr. John, Professor Longhair and Earl King, the Radiators have appeared with the Allman Brothers, Little Feat, B.B. King, Robert Cray, The Band, Los Lobos and Taj Mahal to name a few. They are also a featured mainstay of the New Orleans Jazz and Heritage Festival every year, owning the coveted closing spot on one of the main stages and playing to an audience approaching 30,000.

The Radiators’ instinctive musicianship catalyzes the festive spirit of their shows. Set list… who’s following it? This band’s legacy rests not only on their extensive repertoire, but also on an uncanny ability to choose the proper song for any given moment. This synergistic pas des deux between artists and audience makes the crowd a part of the music. This intuitive interaction is the hard earned result of 25+ years of live performances. Their repertoire of over 1500 songs provides a basis for a fresh and spontaneous approach to their music.

The Radiators are a true rock n’ roll band, loyal to the concept of ensemble playing. They rely solely on the spirit of the music and lyrics (coupled with the band members’ natural rapport) to create “the show”. It is this musical marriage that has created the Radiators legend and secured the fantastic loyalty of fans known as “fish-heads”. Some describe a Rads show as a contest between the band and the audience to see who can have the most fun (and everyone WINS!). Their music is a living & breathing entity, and one never knows what will happen at a Radiators show… not even the Rads!

From the earliest days, The Radiators have used fish and fish-related themes in their iconography. They refer to their music as “Fish Head Music” and their fans call themselves “Fishheads” (similar to the term “Deadheads” used for fans of the Grateful Dead, not to be confused with “Phish Heads”). Their first self-owned label was “Croaker”, named for the common variety of fish. Their album covers, album and song names, and lyrics are full of fishy references.

On November 8, 2010, the following was posted on the band’s official website, theradiators.org: FOLD UP THE BIG TOP After 33 years..over 4500 live shows..and a dozen albums..legendary New Orleans rockers The Radiators are finally calling it quits. The band has officially decided to break up in mid-June following their final tour which will include one last New Year’s Eve run, a MOMs Ball and also headlining their final appearance at The New Orleans Jazz & Heritage Festival. The band will honor all dates already on their schedule and are planning to add as many shows as possible before ending their storied 33 year career. The guys want to whole-heartedly thank their long time fans for making this ride as amazing as it has been. They truly feel that their fans are the best and most dedicated in the world and have kept their traveling circus alive. Individual band members will announce their plans in the near future.

The band’s breakup was the result of Ed Volker’s decision to retire. The Radiators played an series of final concerts around the country, ending with a final weekend at Tipitina’s, “The Last Watusi” on June 9-11, 2011.

More info on The Radiators is available at http://theradiators.org/