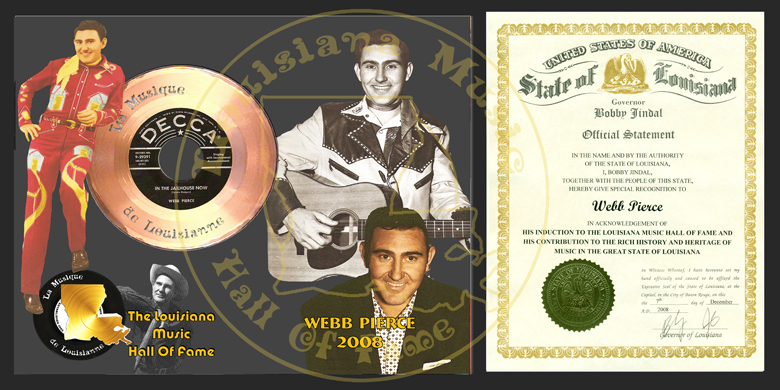 Between 1952 and 1982, Webb Pierce had nearly 100 songs make the charts, several of which became crossover hits.  Not always popular among his peers, he nevertheless developed a loyal group of fans.  His father died when he was only three months old and after his mother remarried, he was raised on a farm seven miles outside of Monroe.   He excelled at guitar in his early teens and when he was fifteen he was given his own weekly radio show, Songs by Webb Pierce, on Monroe’s KMLB.

Following a three-year hitch in the Army, he and his wife moved to Shreveport, where he got a job working in a department store.  In 1947, the couple appeared on the KTBS morning show.  During this time he developed his own unique style while performing at local engagements.  His first recordings for 4-Star Records met with little success. He moved to KWKH and was made a member of the Louisiana Hayride during its first year of operation in 1948.

In 1950, Webb and his wife were divorced and he started his solo career.  He formed Pacemaker Records with Hayride director Horace Logan, recording Drifting Texas Sands under a pseudonym because he was still under contract with 4-Star.  He subsequently signed with Decca and made his first recordings there in 1951.  Wondering was the start of his successful career, spending four weeks at number 1 on the U.S. Country charts, helped no doubt, by Tillman Frank’s planting audience members to applaud his performance. The next year, 1952, included a new marriage, leaving his job at Sears Roebuck, leaving the Hayride, and joining the Grand Ole Opry.

During the ‘50s and the early ‘60’s, Webb Pierce was extremely popular. Among his most famous songs were There Stands the Glass (1953), In the Jailhouse Now (1955), and Fallen Angel (1960). His recording of Slowly was one of the first recordings to feature the pedal steel guitar.  By 1960, rock & roll took some of the steam out of his career much as it did for most other hardcore country singers.

By this stage of his career, however, Pierce was extremely wealthy and was known as one of the most flamboyant country singers of his time.  He built a $35,000 guitar-shaped swimming pool at his house and wore gaudy outfits designed by Nudie, the Hollywood western tailor.

He appeared in several movies, including Buffalo Guns, Music City USA, Second Fiddle to a Steel Guitar, and Road to Nashville.  In the late ‘60s, he opened his home to tourists, sparking a feud with neighbor Ray Stevens, who initiated a successful lawsuit against Pierce.  He had one last hit, charting in 1982 with a remake of In the Jailhouse Now with Willie Nelson.  For the most part, however, it appeared that like so many of the older singers, he was forgotten.  He waged a long battle with cancer that he finally lost on February 24, 1991.

In 2008, atWebb Pierce was posthomously inducted into The Louisiana Music Hall Of Fame.

Be sure to visit  Webb Pierce’s web site at www.webbpierce.net .