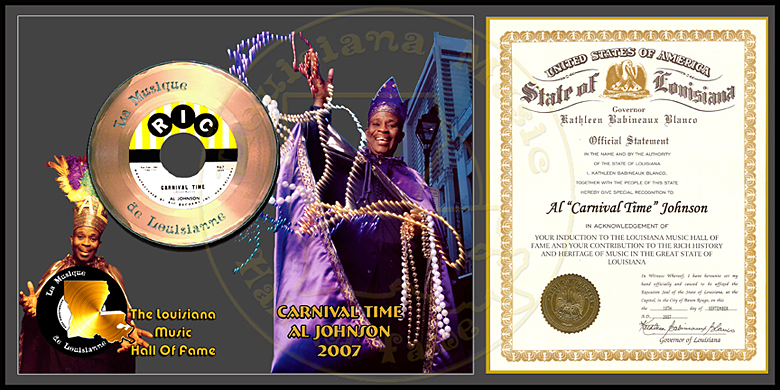 It was in December 1959 that Alvin Lee Johnson (born June 20, 1939) entered Cosimo Matassa’s recording studio.  He emerged from the studio on Governor Nicholls Street with what would be a belated hit song and a new name, Al “Carnival Time” Johnson.  Joe Ruffino produced the recording session for his Ric label and Carnival Time eventually joined Professor Longhair’s Go to the Mardi Gras and Big Chief, and the Hawkettes’ Mardi Gras Mambo as classics of the New Orleans Mardi Gras.

All four songs are re-released on an annual basis in response to ongoing demands from Carnival goers. Johnson, like so many New Orleans musicians, grew up in the city’s Ninth Ward where he played trumpet and piano.  Born in 1940, he was influenced early on by Sugar Boy Crawford, Fats Domino, and Smiley Lewis.  He won several talent shows with his version of Crawford’s I Cried.  He cut his first record, Ole Time Talkin’, b/w If I’ve Done Wrong, for Aladdin Records in 1956 at the age of sixteen.

Even after near a half-century, Johnson remains dissatisfied with Carnival Time.  Because of its unique arrangement, studio musicians insisted that the timing on the song was all wrong.  Finally, even Johnson now says that he feels they never got the song “one hundred percent right.”  But the song’s lyrics, which make sense only to those familiar with the annual Mardi Gras tradition, was right enough to catch on and to become a Carnival standard.

Carnival Time didn’t take off, obliterated instead in 1960 by Jessie Hill’s Ooh-Poo-Pah-Doo.  It wasn’t until Johnson was drafted and subsequently stationed at Fort Bliss, Texas, that he began to hear stories from family and friends that Carnival Time was hot back home.

He returned to New Orleans at the end of 1964 to find the local music scene decimated by the advent of Beatlemania and the accompanying British Invasion.  Ruffino had died while Johnson was in the Army and a protracted legal fight ensued over royalties and rights to the song that left him jaded at the music business.  He eventually returned to performing, however, after finally being awarded full rights to his hit in 1999 and in 2005, he reigned as King of the Krewe Du Vieux.

On April 14, 2007 at the LMHOF “Legends Of Louisiana Celebration & Inductions” concert in Mandeville, Louisiana, Al Johnson was inducted into The Louisiana Music Hall Of Fame. 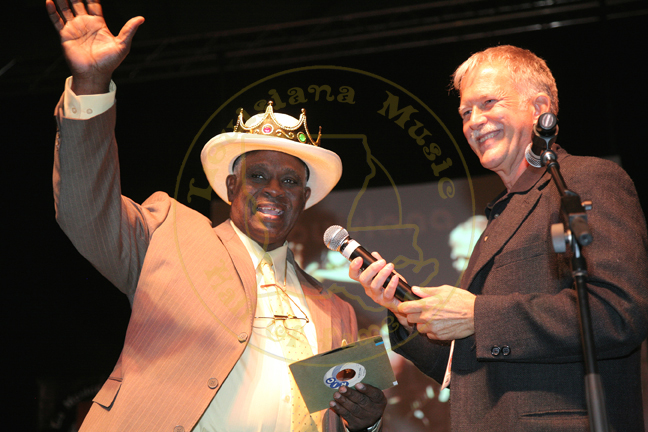 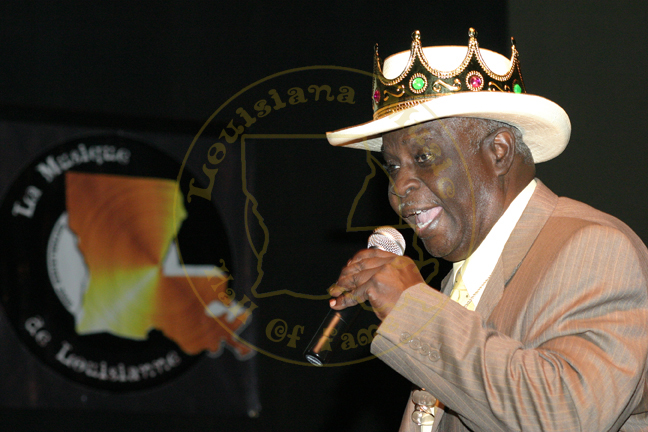 More info on Al Johnson is available at www.alcarnivaltimejohnson.com.