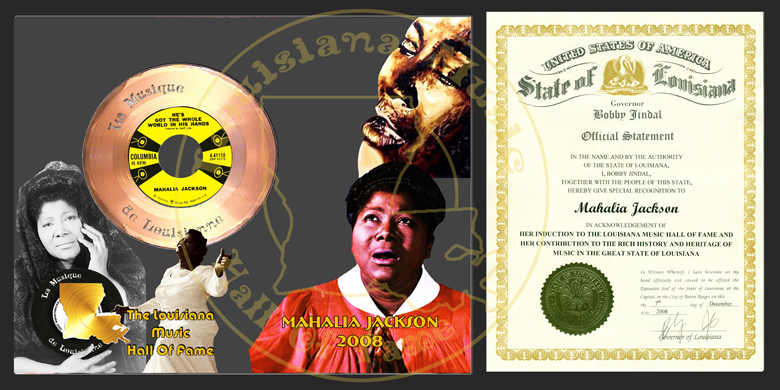 The year of her birth is uncertain, but there’s no ignoring the impact that Mahalia Jackson had on gospel music.  The daughter of a Baptist preacher, she was born in New Orleans and after her mother died when she was five, she was raised by family members until she moved to Chicago in 1928.

Isaac “Ike” Hockenhull, whom she married in 1936, encouraged her to pursue a professional singing career in lieu of singing in the Greater Salem Baptist Church choir.  She subsequently won an audition but turned down an offer from Decca records to sing blues.  She also rejected Louis Armstrong’s entreaties to join his band.  It wasn’t until she teamed up with the “Father of Gospel Music,” Thomas Dorsey of Chicago in 1929, that her professional singing career took off.  Her signature performance of Dorsey’s composition Precious Lord, Take My Hand became one of the most requested songs at her concerts.

Her recording of Move On Up A Little Higher sold more than eight million copies in 1946 and was included in the Rock & Roll Hall of Fame’s 500 Songs that Shaped Rock & Roll.  In addition, her recording of He’s Got the Whole World in His Hands climbed to number 69 on the Billboard Hot 100 in 1958.

She was the first gospel singer to appear in concert at Carnegie Hall (1950) and at the Newport Jazz Festival (1958).  In 1961, she sang at the inauguration of President John F. Kennedy and at the funeral of Dr. Martin Luther King in 1968, she sang Precious Lord.  She consistently brought movie theater patrons to tears when she sang Trouble of the World during the funeral of the Annie Johnson character in the Lana Turner- Sandra Dee film Imitation of Life.  She died of a heart attack in Chicago on January 27, 1972.

In 2008, Mahalia Jackson was posthomously inducted into The Louisiana Music Hall Of Fame.

Be sure to visit Mahalia Jackson’s web site at www.mahalaijackson.us ..